This past week it was announced Amazon has sealed the deal of purchasing MGM.

For a cool $8.45 billion, Amazon acquired MGM’s vast library of films from the studio created way back in 1924. Most of its films pre-1948, like The Wizard of Oz and Gone With The Wind, had already been sold in the mid-80s and is now owned by Warner Bros.

But that still leaves a big catalog of films Amazon will now own. They just got plenty of movies to fill up their streaming service and be an even bigger competing force in the ‘Streaming Wars’.

Amazon already announced some of the popular titles they acquired, like the Rocky films and The Pink Panther, they plan on creating new movies and shows based on them. Beloved, recognizable and popular titles are too good not to do anything with. They won’t earn much more money if they’re just left alone. Let’s create some new content based on them and really start milking these cows!

With that in mind, some might think this is franchise-altering news for James Bond. Now that 007 is in the hands of streaming giant Amazon can we expect to see spin-off movies, streaming shows and an amped up release schedule of Bond films?

I’m not betting on that. James Bond was MGM’s most prized property. Yeah, it sure is popular, profitable, it’s a major franchise. But there’s a caveat to that – MGM didn’t own James Bond outright, but split ownership of it with the Broccoli family.

Basically, it is half-siblings Barbara Broccoli and Michael G. Wilson, who inherited the Bond rights from Barbara’s father Cubby Broccoli in 1995 that call the shots with 007. They are the ones running Danjaq, LLC and Eon Productions that are responsible for making the Bond films. They make all the creative decisions of what will happen with the James Bond movies. What the Bond stories will be, they settle on the titles of them, who will be the director, who will be in the cast, who will sing the theme song and who their leading man will be. They don’t have to answer to anyone about any of that.

It’s a unique level of ownership of a film property. Unlike other properties and franchises that have been absorbed into large companies who maintain an all-powerful complete ownership of them and the movies can be made by committees, James Bond is still a family owned product. It comes down to Barbara and Michael. They decide what fans will experience when watching a 007 film.

So maybe Amazon would like to do a James Bond prequel series for their streaming service. An ongoing 007 streaming series would certainly excite fans and get a lot of new Amazon subscriptions. But if Barbara and Michael don’t want to do it, they can nix the idea with one simple word, “No”. What if Amazon wants to premiere the newest Bond film on their streaming platform? Well, the Broccoli’s again can just refuse. They’ve already said they want to continue to release the Bond films in theaters by the way. The one statement they released in regards to the Amazon-MGM deal was – “We are committed to continuing to make James Bond films for the world-wide theatrical audience.”

One thing the Broccoli’s do need is a studio to finance the Bond films. This has caused problems in the past when MGM ran into financial problems. That resulted with the Bond series being put on hold at times causing delays. Amazon certainly has the money to finance a film and looks to be in a more secure position where issues like ones from the past won’t arise.

Broccoli, Wilson and Amazon need each other to continue the Bond films and to make money from the title. It was already reported that Amazon executive Mike Hopkins, who handled negotiations with MGM, contacted the Broccoli’s to reassure them 007 will be in good hands with them. Based on that, one would assume Amazon knows exactly what the deal is and what part they will play with the James Bond series. Amazon will provide the funds, Babs and Mike will make the Bond films and they’ll both reap the profits. I wouldn’t expect any new radical or shocking turn of events for James Bond because of the Amazon acquisition. Broccoli and Wilson have gone through regime changes in the past and they haven’t shaken from their vision for what they want to do with 007 or been influenced by their studio partner. There’s no indication either of them have grown tired of being the keepers of Bond and want to sell him off completely to someone else.

So, I would predict that it’s going to be business as usual for James Bond. No Time To Die will come out on schedule later this year and then Babs and Mike will start making plans for the next era of Bond films with a new actor. Amazon will watch and wait from afar awaiting their decisions.

There’s always the chance Babs and Mike will have a sudden change of heart and suddenly that old Halle Berry Jinx spin-off film idea will suddenly sound appealing and they’ll take up Amazon’s proposal of it. I think it’s unlikely, but you never know. 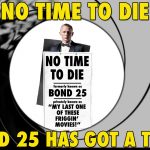 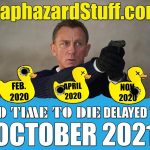