Finally I have a reason to tune into some tube this year! Two shows making their return for the third go around!

Karl Pilkington returns for a third travelogue to experience sites and adventures…..that he probably really wasn’t ever interested in seeing or doing in the first place.

I’ve been a fan of Pilkington’s since first learning about him. Thanks to Ricky Gervais and Stephen Merchant who unleashed this unassuming personality onto the world, his unique insights and perspective on all things big and small have garnered him countless fans – I’m one of them.

Gervais and Merchant coerced Pilkington to travel the world and visit the seven wonders of the world in ‘An Idiot Abroad’. Pilkington wasn’t that thrilled with any of it. He might not have been too impressed by the sites and the different cultures he got to see, but it sure was fun to watch him be miserable every step in those travels.

Somehow Pilkington agreed to set out on another Gervais and Merchant orchestrated adventure in ‘An Idiot Abroad 2: The Bucket List’. As he explained why he returned, “I was on a show called An Idiot Abroad. Job offers aren’t exactly flying in”. Again very funny. Now I’m gearing up for ‘An Idiot Abroad 3: The Short Way Round’. This time Pilkington travels around with Warwick Davis. The show has already been shown in the UK, but in the U.S. I’ve had to wait until now.

I’ve avoided trying to watch any clips or hear about what happens on this adventure. I’d rather find out myself. I’m somewhat nervous about Karl having a partner this time. He does fine on his own in my opinion, but this all depends on what kind of team Karl and Davis will make.

It begins Saturday January 19th on the Science Channel and I’m really looking forward to it. Sadly, it seems like it’s the last we’ll see of An Idiot Abroad. I hope it ends on a high at least.

Another third go around for a show that I’ve currently been watching is ‘The Joe Schmo Show’. Spike’s faux reality show – and the only time I ever tune into Spike!

The premise was simple when the show premiered in 2003. Take an unassuming guy who thinks he’s competing for a bunch of money against competitors on a reality show called Lap of Luxury. The one thing he doesn’t know is it’s all fake with actors, planted storylines and ridiculous twists that will see how far the show can go and see how this poor guy will react to it all.

At the time reality TV was at its peak and The Joe Schmo Show offered up a refreshing perspective to how asinine these shows have gotten. I haven’t seen that season since it aired, but I still remember the wacky eviction mantra when host Ralph Garman would send a contest packing. He’d pick up their individual ceremonial dinner plate and recite:

“Ashes to ashes. Dust to dust. Ashley….you’re dead to us.”

And then he’d smash the plate in the fireplace! I thought it was hysterical.

The Joe Schmo Show returned the following year with season 2. The show upped the ante having two schmo’s being targeted on the fake show ‘Last Chance For Love’.

Now after an extended hiatus a new Joe is back competing in ‘The Full Bounty’. Twelve contestants are hoping to be a real life bounty hunter and win a prize of a hundred grand. Our Joe’s competition this time is against contestants ranging from ‘The Over Achieving Asian’, ‘The Deaf Girl and The Interpreter’, ‘The Asshole’, ‘The Model’ and Lorenzo Lamas.

This show is not for everyone. At times it can get awfully lowbrow and downright stupid. If some of the gags were employed in an authentic reality show or even a sitcom I would have been reaching for the remote.

However, since all this silliness is for the benefit of seeing how the Joe will react – it works. The real payoff is seeing his eyes widen and try to figure out what is going on.

I was hesitant about season three when I sat down to watch it. I kept thinking what can they possibly do now, but I was quickly won over by once again such a goofy presentation of a reality show and the fact the authentic Joe who is meant to accept all this is a real good guy.

I’m not sure how he’ll feel when he finds out there’s really no bounty hunting job to be had, but so far he’s really been putting his all into the competitions the producers have thought up. I suspect things will only get stranger for him as the show progresses. 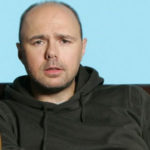