In the mid-1950’s Bob Crane was an extremely popular radio show host in Los Angeles. He was known as ‘The King of the Los Angeles Airwaves’. By the early 60’s Crane began to branch out into acting. In 1965 Crane would find success by landing the lead role in the prisoner of war comedy television series Hogan’s Heroes. Hogan’s would run for six years and would make him a recognizable face to audiences.

After it left the air six years later Crane would never be able to duplicate the success of his role as Hogan and his acting career would decline. But Crane would have his own private cameras to perform in front of where he exhibited something far removed from the wise-cracking, friendly, clean-cut persona the public knew him as.

Crane’s secret life of sex addiction and his photographic and video recording of his trysts would be exposed when he was found murdered in an Arizona hotel in 1978. The case remains unsolved and Crane’s life and death would become one of the most bizarre and scandalous Hollywood stories ever.

Director Paul Schrader’s Auto Focus sets out to explore Crane’s secret life and unsolved death. It begins in sunny California with Crane (Greg Kinnear) getting offered the role in Hogan’s. Crane is a churchgoing happy family man who at first is apprehensive about this ‘concentration camp comedy’, but with wife Anne’s (Rita Wilson) support Crane accepts the job and goes off to make the popular show. Crane then meets tech whiz John Carpenter (Willem Dafoe) who has all the latest electronic gadgets. Crane is fascinated by it all, becomes pals with ‘Carpy’ and gradually is drawn into the opportunities his fame now offers him with willing women.

Along with Carpenter’s latest video equipment, the pair begin a lifestyle of having sex with women and filming their exploits. It soon evolves into insatiable appetites for sex and the recording and rewatching of it. The strange friendship seems to be based on each of them using one another for what they bring to the party – Crane’s fame and Carpenter’s tech knowledge.

I had never given Kinnear too much thought before seeing this movie when it first came out, but since seeing him in Auto Focus I gained a new respect for him. He’s fantastic here.

It’s not just clever casting of Kinnear as Crane – they both have likable faces and a friendly attitude about them – but Kinnear really gives the role his all as the bright Hollywood family man we first meet who begins to morally crash with his obsessed depravity. He somehow manages to remain a sympathetic character as he shallowly exploits his fame with anonymous women and we watch him sabotage his life and career. Kinnear and Dafoe are an unlikely pair, but somehow it works. Dafoe is also great as the sleazy friend who inducts Crane into this sexual arena and eventually is overridden by Crane’s passion to the addiction.

It’s somewhat disturbing to see Dafoe, who by himself is obsessed with sex, occasionally take a break from it for just a fleeting moment by casually asking Crane if he want’s something to eat, while Crane doesn’t even hear the question and continually rambles on about videotaping women.

Crane’s new ‘hobby’ starts to put a strain on the other parts of his life. Anne divorces him and Crane marries his co-star from Hogan’s Patricia Olson (Maria Bello).

Once Hogan’s ends its run Crane is forced to find other work, but that now seems difficult as he’s constantly focused on adding new women and videotapes to his growing collection. His sex addiction begins to bleed into other parts of his life and Crane is not ashamed of any of his carnal exploits, simply saying “Sex is normal”.

Despite his manager Lenny (Ron Leibman) pleading with him to be more discreet Crane’s career is in jeopardy. Instead of stopping, Crane only escalates his activities. His reputation forces him to work in dinner theater. Yet, even this detriment to his career he can find an upside. Traveling from town to town allows Crane to be away from his new wife, hang out with Carpenter and take their cameras on the road. Schrader illustrates Crane’s downward spiral by gradually degrading the film throughout the story. What started in a bright pastel stable Hollywood setting of Crane’s life begins to desaturate, get darker with more added use of handheld camera work. It’s done in a slow enough progression that you may not notice it at first, but by the end it feels like a completely different movie than what began.

There are instances where the graphic sex shown threatened to get Auto Focus an NC-17 rating. Rather than cutting shots to avoid that stigma rating, Schrader oddly enough decided to pixelate over certain sections of the film. While this might seem like a strange decision I think it helps reinforce the idea that what we are seeing is something private and disturbing. It’s not the sexual acts that becomes the issue in Crane’s life, it’s the addiction to the sex.

It’s also the fascination with the act of filming that preoccupies Crane and Carpenter. The idea of this new videotape camera and having a VCR allowing you to record and rewatch ‘home movies’ seems revolutionary. The concept makes Crane’s head spin and he falls in love with these electronic wonders. At times it appears the actual technology of being able to rewatch their sexual exploits afterwards and catalog them becomes the draw for them to do it.

There’s one amusing scene where the pair have two ladies in Carpenter’s apartment. However, their attention isn’t aimed at the women, but of the new gadgets Carpenter has just acquired. I can only imagine the joy the pair would find with today’s technology.

In the end Crane’s personal and professional life is in ruins and the realization has hit that he has to change his ways. Severing his friendship with Carpenter Crane sets out to rebuild his life, but that would never happen. The film ends with Crane’s brutal unsolved murder. There has been criticism of how faithful an account Auto Focus is. Crane’s son Scotty attacked it for its supposed inaccuracies. Whenever I watch a film based on a ‘true story’ I always go in expecting there has been artistic liberties taken in adapting the story, creating events and rejuggling things for a more effective narrative structure. And I wholly accept that was the case with Auto Focus.

I won’t dwell on how true of an account the film is to Crane’s life, only to say that it’s a riveting portrayal of an addiction that cost a man everything. Everyone in the cast gives wonderful performances, lead by Kinnear and Dafoe. Schrader makes it a depressing morbid journey.

I’m not at all surprised it didn’t do well in theaters and audiences didn’t flock to go see it. At times it can be an extremely unsettling film, but it’s one I always thought was great and very underrated. 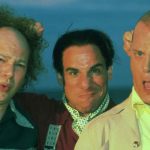