It’s been a bumpy road for Daniel Craig, but he’s finally going to make it to his third Bond film, now officially announced being titled ‘Skyfall’.

Remember when he was first cast and all the anger and confused looks by fans at that decision? It didn’t help that he was immediately following one of the most beloved 007’s – Pierce Brosnan.

One look at Craig and fans began complaining and taunting ‘James Blonde’ cries to anyone who would listen (mainly to other Bond fans).

“He doesn’t look like James Bond is supposed to look!”

A website even started up proclaiming that “Daniel Craig is not Bond”. (it’s still up by the way).

Movie audiences scratched their heads with the decision. Like it or not Daniel Craig was James Bond and he was starring in the next 007 film, 2006’s Casino Royale. After fans saw it the complaints about Craig shifted to praise.

Casino was a huge hit and Craig’s performance wowed audiences and critics. Some even suggested an Oscar nomination was in order. Craig starred in one of the biggest successes of the Bond series and fans couldn’t wait for another.

2008’s Quantum of Solace was once again an enormous success, but generally it got a much cooler reception as Craig’s debut. Everyone was fully expecting a third film, but weren’t expecting to have to wait four years for it.

As it happened in the early 90’s, the Bond films were put on hold. This time MGM filed for bankruptcy and Bond 23 was postponed indefinitely until the studio was back on its feet. How long will that take? Finally, Bond fans got the news they’ve been hoping for – Bond 23 has started filming.

At a crowded press conference Bond producers Barbara Broccoli and Michael G. Wilson announced the title of the film will be Skyfall and is set to be released November 7, 2012.

They were pretty careful with information regarding the film and didn’t go into any details regarding the story. The official synopsis says, “In Skyfall, Bond’s loyalty to M is tested as her past comes back to haunt her. As MI6 comes under attack, 007 must track down and destroy the threat, no matter how personal the cost”.

Craig and Judi Dench will be returning. Javier Bardem is set to play the villain. Berenice Marlohe and Naomie Harris will be the new Bond girls. Ralph Fiennes, Albert Finney and Ben Whishaw have all be confirmed to be part of the cast. And the film will be shooting on location in London, China, Turkey and Scotland.

It will be a stand alone story and not in anyway connected to Quantum of Solace.

That’s about all we know right now. As filming gets underway I’m sure we’ll start getting nuggets of info about the story and what we can expect. For now all we mainly know is that Bond is returning.

More of my reaction to all this Bond news….. 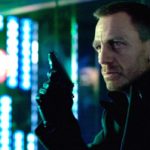 A New ‘Official’ Pic From Skyfall!