Only two years from the debut of Ian Fleming’s James Bond in his novel Casino Royale, the British secret agent made his live action debut….on an American television program.

CBS’ Climax featured an hour-long adaptation of the Flemings story and introduced television audiences to James Bond 007 – or as he’s referred to in the program Jimmy Bond, who is now an American agent played by Barry Nelson.

With this program Nelson would have the distinction of being the first actor to play Flemings Bond character. Although Sean Connery would often be considered the first James Bond. General audiences aren’t that familiar with the program and most probably don’t even know it exists!

But it does exist in all its black and white, grainy glory.

The role of the villainous Le Chiffre is played by famous character actor Peter Lorre and the first Bond girl Valerie Mathis is played by gorgeous bombshell Linda Christian. We also get to see Bond’s ally Clarence Leiter (they changed his name from Felix for some reason) who’s played by Michael Pate.

Fans of the novel will notice a lot of changes to the story and characters, but the basics are essentially the same. James Bond must win a card game against Le Chiffre to stop him from continuing his evil ways. The stakes and risks Bond must take are high as Le Chiffre has every intention of winning at any cost.

So, is the 1954 adaptation of Casino Royale worth a watch? Here’s my review. 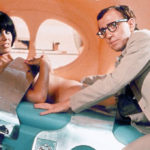