Sylvester Stallone is Gabe Walker a Rocky Mountain rescue climber who has taken a year long guilt trip away from heights after a climbing accident ended in the death of his pal Hal Tucker’s gal.

He returns to Colorado to ask his estranged flame Jessie (Janine Turner) to come with him. While she’s berating Gabe for blaming himself and leaving, a daring mid-air plane robbery is taking place led by the evil and ruthless Eric Qualen (John Lithgow). A major misstep in the plan results in three suitcases filled with $100 million falling to the mountain ranges below, followed by the planeload of thieves crashing into the desolate wilderness.

However, Qualen is a sneaky one and phones in a distress call which Tucker and a reluctant Tucker (Michael Rooker) answer. Now the pair are forced to lead Lithgow and his gang to the fallen cases. Walker soon finds himself hanging by his fingertips at dizzying heights in order to save his friend and stop this group of killers before they get all their loot and waste Hal.

Cliffhanger was a film that Stallone needed to be a hit at this time in his career. After a disappointing fifth Rocky movie and a few failed attempts at comedic roles, Sly got back to his action roots and it resulted in one of his most popular and entertaining action movies. Cliffhanger is essentially another action imitator using the ‘Die Hard formula’. The popularity and freshness of Die Hard caused a massive ripple effect in its wake and throughout the 1990’s countless action films would use it as blueprint and do their own tweaks with it.

Cliffhanger would be the ‘Die Hard on a Mountain’ movie. Instead of ventilation shafts we get caves. Instead of riding elevators we have swinging from ropes. Instead of jumping off the top of an building exploding it’s an exploding mountain. And we have our hero using anything at his disposal he finds in his surroundings to outwit the bad guys.

And I’m not saying Cliffhanger is a bad movie by pointing out this comparisons. In fact, it’s a very entertaining action flick. Director Renny Harlin provides some great thrills, there’s convincing high altitude tension, it has a good score by Trevor Jones, Stallone grunts and runs in slow-motion as good as he’s ever done, there’s some unintentional laughs and performances and the mountain landscape is gorgeous and is milked for everything they can think of.

As Gabe escapes from Lithgow he sets about to find those three suitcases of loot before the baddies do hoping to trade the cash for Tucker’s life. It becomes a cat and mouse game of Walker trying to stay ahead of Lithgow, performing some daring do’s with his climbing talents, offing a baddie while he’s at it and then making a nail-biting escape. Most of the action in the movie comes down to heights and falling. What else should you expect from a movie called Cliffhanger? And it’s all done extremely well.

The vast landscapes that were chosen, all the work and effort that went into filming some of the climbing stunts are impressive and pay off. They still hold up extremely well. The opening sequence of Stallone and ‘the climbing accident’ is well put together. It’s intense, beautiful looking and pretty scary.

There are certain shots of Stallone climbing on the side of a mountain and the camera tracks over him and all we see is the ground lying thousands of feet beneath him. I’m not sure how they accomplished some of those opening shots. If it was some kind of early CGI shots, matte paintings, a stunt double, but it’s pretty impressive and establishes the heights that will be threatening our hero throughout the movie. The plane robbery by itself is an exciting sequence with a terrific stunt. I read the plane to plane transfer was one of the most expensive stunts ever filmed. Again, it’s pretty thrilling. If you suffer from acrophobia some of this stuff should make you feel a little woozy.

This was one of the those last gasp of action movies where walkie talkies become a vital tool in the story. It feels old school with not a cell phone in sight. I imagine if they remake this (which I read recently they’re planning to) they’ll incorporate cell phones into it somehow. They always try to squeeze some tension and storytelling convenience from cell phones being a way for characters to talk with one another. Then when story needs them to be unable to communicate you just suddenly give them the problem of not being able to get a signal or their batteries dying at the required moments.

Stallone does his thing and fans of his will love this movie – if they haven’t already. He plays a bit more of an ‘everyman’ action hero and not so much the unstoppable force Rambo became. Gabe Walker gets cold, when he’s punched he falls down and at times he seems to be getting worn out from all this cliffhanging.

I remember reading criticism at the time that his bulging muscle physique was not like a real, genuine mountain climber so his role in this was not convincing. I find it funny that with all the stuff that happens in this flick Stallone climbing mountains was the one thing that some people had a problem with. Or people were annoyed with the fictious bolt gun that is used. I don’t know, I don’t let any of that stuff bother me. But there a few other things I roll my eyes at in Cliffhanger. Like Lithgow’s accent! What the heck is he trying to do in this movie?

Originally Christopher Walken was to be Qualen, but for some reason pulled out and Lithgow was a last minute replacement. Somehow I can’t picture Walken being in this movie. He can be a scary guy in a locked room, but in the vast outdoors I’m not sure how that would go.

Lithogow’s accent is pretty awful. It’s somewhat hard to take him seriously any time he starts talking. I especially enjoy when he ends his sentences with ‘bastard’, such as “Tucker and Walker, you resilient bastards!”.

I guess he was going for an English accent, but it’s laughably bad. I don’t even know why he bothered with doing accent. His character would have been fine if he just used his regular voice. I don’t think anyone would have cared.

On top of his accent he spouts out some very cheesy, corny, glorious bad guy dialogue along with it! I remember seeing this in the theater with a pack of friends and we were constantly amused by Lithgow. He goes around saying silly stuff like,

“You want to kill me don’t you Tucker? Well, take a number and get in line.” We all started howling in laughter after he delivers the clichéd, hackneyed line after learning Stallone is still alive towards the beginning of the film, – “I’m beginning to dislike this….Mr. Walker.”

From there on out we couldn’t wait to hear what he was going to say next. What a hoot.

Rex Linn as the traitorous Travers also provides a very entertaining performance. He screams an awful lot and his go to phrase seems to be incorporating “God Dammit” into every other line he delivers. They might not be the most complex bad guys, but they’re fun to watch and they serve their purpose.

They all are given their own repeat worthy quotes, especially Leon and Fairbass as they beat up Stallone and Rooker. Leon continuously asking Tucker where the money is as he beats him. It’s like the guy is never going to give up asking him that question! But I prefer Fairbass metaphorically describing a soccer game as he kicks around Rooker. “Do you like soccer? It’s a great sport!”. He has a great accent and it’s fun to imitate some of his lines!

The bad guys are more fun to watch interacting than the good guys. Sure Stallone handles all the action well and grunts and gets thrown around. Rooker spends most of the movie at gunpoint and being hit by the bad guys.

The co-stars simply fulfill their required roles without much fanfare. A ‘Special Appearance’ by Paul Winfield does very little. The pair of extreme outdoor kids act dopey, talk all radical and get themselves into trouble. I always wished Michelle Joyner was able to stick around a bit longer since she is pretty cute, but her Sarah is the unfortunate victim in the opening ‘climbing accident’, so she doesn’t get to stick around for very long.

Really the best supporting moment by the co-stars is Ralph Waite who appears to be laughing during the dramatic ‘Sarah falling to her death’ scene. It’s true! He really looks like he’s laughing his ass off! It’s like he’s getting off on the tension of the moment. I imagine it’s just the way his grimace looks, but once you notice it it’s hard to ignore. It becomes quite a funny contrast seeing him smiling while Rooker is acting completely devastated as his gal is about to become splattered on the rocks below. Next time you watch the scene just keep your eye on Waite!

Our lead couple Stallone and Turner….you’d find more chemistry in an elementary school text book than between them. They don’t manage to generate one spark. He’s a man and she’s a woman and they say they love each other. If you need more convincing to believe in that relationship you’re too tough a customer for this flick.

But that’s not why you’d be watching this movie. It’s for the action and it delivers – that’s all that counts.

The action throughout looks good and is exciting. Is it all believable? Well, who cares. Most of the outdoor action looks so good it really makes some of the lesser scenes look all the more awful.

The biggest one for me has always been the frozen lake scene between Stallone and Linn. It’s so clearly a set it’s incredibly jarring and stands out immediately. It looks like some Christmas variety show set leftover from the 1970s. While watching the movie when Linn wanders into the scene you might find yourself saying, “Wait, there’s a soundstage on this mountain?” I read somewhere that money started to run low and Harlin was forced to cut some corners. That frozen lake scene was clearly one of them and Harlin was very disappointed with how it turned out. It really shows in that scene.

Harlin was very good at directing this kind of action popcorn fluff during this stretch of time. Not soon after this he lost his way and his career took a nosedive. I guess it was Cutthroat Island that was the beginning of the end for him.

Rewatching Cliffhanger, as cheesy as some parts are, I realized this was the last Stallone action movie I really enjoyed. I vividly remember first seeing the trailer for this and being very impressed by it. That was a pretty good trailer!

The movie still holds up and continues to be a satisfying action flick. I’ll be somewhat curious as to how this proposed remake will be and whether it will improve on any of the cliffhanging. I’m betting it will try to be much more serious and realistic and as a result may not be as much fun. Lithgow’s accent will definitely sorely be missed! 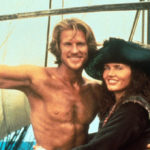 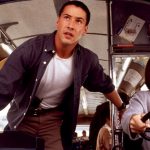 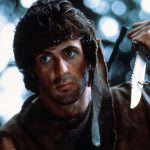