Nicholas DeFranco (Jerry Orbach) is set to testify against the mob, but Justice Department supervisor Col. Mason (Mason Adams) and Agent Martin Lipton (Cliff De Young) are afraid he’ll get rubbed out before he can take the stand. They have to stage a fake ‘hit’ on DeFranco, kill him in a very public way whereby alleviating any heat on him.

To make this ‘assassination’ look convincing they hire movie special effects whiz Rollie Tyler (Bryan Brown) to pull it off. Tyler is just used to working on cheapie horror movies with temperamental directors, but ends he up accepting the very hush-hush job – which ends up being a very bad mistake.

Oh, Rollie’s special effects tricks work and convincingly make it look like DeFranco has been successfully murdered in a very public way, but Mason and Lipton weren’t completely honest about their motives for this staged production. Rollie is now a ‘loose end’  in their sinister plan and now needs to be gotten rid of.

Rollie is forced to use his ‘f/x talents’ to save his own life and expose this conspiracy, while police detective Leo McCarthy (Brian Dennehy) is one step behind him unraveling this mysterious case. I remember when F/X first came out and how it snuck up on everyone. It was a small movie that surprised everyone by jumping to number one when it was released and becoming something of a little sleeper of a hit.

I watched F/X a ton of times when it hit cable. I just loved the whole premise of movie special effects being used at the center of a thriller. All these neato squibs and makeup effects meant for monster movies being used to trick bad guys and survive real life and death situations – how can that not be a fun idea!

All the talented Rollie Tyler needs is his trusty f/x suitcase, his f/x van and he can take down mobsters and dirty government agents all on his own. It was like if Rick Baker became James Bond!

Rollie realizes his life is in jeopardy and Mason and Lipton mean business. His actress girlfriend is caught in the crosshairs and is killed. This brings more problems for Rollie as New York detective Dennehy arrives and wants answers and tries to make sense of what is going on with this movie magician.

Rollie’s out on the run from these dangerous guys and he starts to employ his special brand of tricks to trip them up, track them down and have them and their plans go bust. Using makeup, dummies and mirrors might seem a bit old fashioned and simple today. You might think, “How would anyone fall for that?”, but at the time it was awfully neat and inventive and even today it all remains a lot of fun to watch. While Rollie’s doing his thing, Leo is busy with his investigating and growing more and more suspicious about the official story Mason has been feeding him. As with all cops from the 1980s he’s undeterred by his captains orders to lay off the case and isn’t afraid to break a few rules.

He becomes convinced this trail will lead him to Franco, who he’s been after for years. He’s not sure what’s going on, but suspects there’s more than meets the eye. <wink wink> and won’t stop from finding out the whole story.

F/X has a unique premise and runs with it offering up clever twists and surprises. It gets awfully entertaining as the bad guys get beaten by silly movie special effects. But the film also manages to ratchet up the tension pretty well.

There’s a great brutal fight scene between Rollie and a baddie. No tricks employed just a flat out struggle with this effects man desperately trying to survive a violent encounter. There’s some illusion happening throughout the movie, but you also feel Rollie is in genuine danger the whole time.

This is the main movie I have always associated Bryan Brown with. He’s a very likable guy in this. He’s a pretty big strapping guy, but he plays a panicked, overwhelmed target pretty well. It’s not until he turns the tables on the baddies and gets to use his special talents when his confidence starts to ignite. He always kind of reminded me a bit of Timothy Dalton too. Dennehy has always been one of those actors who has a charismatic presence anywhere he shows up. Even when he’s playing a bad guy in, like Silverado, there’s something about him that’s always very charming.

Here, he plays a very messy, unkempt, arrogant cop. He’s much more of a colorful character here than in the later sequel, where they cleaned him all up and made him less of a jerk. He’s much more of persistent schlub of a cop here and it’s a heck of a lot of more interesting.

There are a lot of recognizable character actors who pop up in the movie. Joe Grifasi, Martha Gehman, Trey Wilson. Their names might not be familiar to you, but you’d recognize them as soon as they show up.

I always thought it was cool that Roscoe Orman plays Dennehy’s boss. The name escapes you? It’s Gordon from Sesame Street! It was the first time I had seen him away from PBS talking to muppets and it was shocking! Talk about an illusion being shattered!

The tall and intimidating Tom Noonan plays one of the hitmen trying to ice Rollie. And in a very brief appearance Angela Basset makes her film debut as a TV news reporter.

The climax with Rollie finally getting the drop on this crew of bad guys is cool and the finale with Leo catching up to Rolie is a satisfying ending tag to this little oddball thriller that ends with the catchy song Just An Illusion playing over the closing credits. Of course, with F/X being so popular the adventures continued with F/X2 five years later. The sequel is quite the bust. There was even a short-lived tv series based on the film. I’ve never seen that so I don’t know how that went.

There’s been talk of a rumored remake of F/X for quite a number of years now (that shouldn’t come as a surprise). There doesn’t seem to be any sign of that happening. I imagine if they did an update to this today Rollie would be a CGI wizard of some kind and do all his tricks using a laptop and green screens.

Fortunately, the original still works and is still a fun little thriller. It’s an underrated gem of movie that I’m not sure a lot of younger folks are even aware of. It’s worth checking out. It’s still a great time.

Here’s the trailer – but be WARNED – it’s not completely spoiler heavy, but It does give a way some fun bits 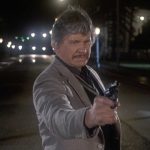