Web Heads are finally getting their first glimpse of 27-year-old Andrew Garfield as Peter Parker aka Spider-Man in Sony’s new reboot of the film series.

The whole ‘reboot’ idea had some fans questioning the decision since its announcement. “Rebooting a series that just started in 2001? Why not let Sam Raimi and his cast return for a fourth film to continue the story they started? Who the heck is Andrew Garfield anyway?”

This one photo is sure to ignite opinions and will give fans an idea how this little known actor will at least look in the role. Fans love dissecting this kind of stuff.

What are my thoughts? I think Garfield looks pretty good in the costume. There are some changes that have been made to it since we last saw Tobey Maguire swinging around in it, but they’re certainly not very radical changes. It just wouldn’t be a good idea to mess around too much with the iconic costume. Garfield also has a leaner build than Maguire, which I think works better for the character. The one detail I really like in the photo is what looks like a backpack hanging on Peter’s shoulder. That one addition just screams the idea that this is a kid. He looks pretty solemn in this photo too.

It’s quite a contrast from the first photo we got to see of Maguire’s Spidey back in 2001. That was a much more heroic pose and he looked ready for some serious crime-fighting. Garfield’s Spidey looks like he already has a lot on his mind and life isn’t as much fun since his spider bite.

If this shot is in the new movie I highly doubt we’ll be hearing ‘Raindrops Keep Falling On My Head’ playing on the soundtrack. 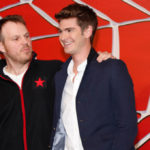 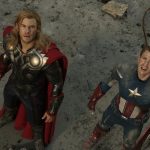