Believe it or not, he’s walking on air!

Producer Stephen J. Cannel was asked by ABC to create a superhero show. Taking up the challenge, he finally got inspired when the idea struck to make a show about a regular guy who wears a suit that has the superpowers and the real focus would be on the characters and the comedy that would result.

The setup: mild mannered special ed. teacher Ralph Hinkley and FBI agent Bill Maxwell get paid a visit by a UFO in the desert. They are given a suit which will enable Ralph to have super powers. However, things get complicated when Ralph loses the instruction manual on how the suit works.

Comedy hijinks ensue as we watch Ralph’s continued attempts to do the best he can trying to learn how the stinking thing works, Bill’s constant frustration with him and Pam Davidson’s disbelief and desperation trying to be the voice of reason in the never-ending adventures the three find themselves in.

With a reluctant hero, a goofy looking costume, a catchy inspirational theme song and a consistent display of flying foul ups, The Greatest American Hero would become one of the most fondly remembered television shows of the decade.

Starring William Katt, Robert Culp and Connie Sellecca, I look at the show that poked fun at being a superhero and just how tough and funny it can be. 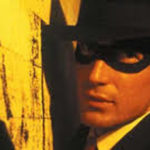