Every year since 1907 crowds have gathered into New York Times Square in New York City to ring in the new year. Over time it’s become ‘the’ place to celebrate New Years Eve and watch the famous New Years Ball slide down a pole during the last minute countdown of the old year passing.

Once the ball has made its decent the new year sign lights up and a million people packed around Times Square scream, blow their party favors and at 12:05 try to figure out how they’re going to get home.

It’s billed as the world’s biggest party. So, why do I think it would be such an awful, miserable way to spend New Years Eve?

I never understood the allure of the ball drop or why anyone would want to try to cram themselves into a pack of a million-plus people, stand shoulder to shoulder sandwiched in between people for hours, all to await a specially designed ball slide down a pole a minute before midnight. Time honored-tradition nothing! I’d rather stay home! Sure, on television they show loads of smiling faces amongst the crowd, but I’m not buying that one bit. They’re probably smiling just because these people realized they got on tv for a few seconds so all this misery they endured in some way paid off.

And it’s not like there’s loads of space to get right to the railing behind Kathy Griffin and Ryan Seacrest (why’d anyone want to I have no idea on that either).You’re probably pushed back so far you’d never even see these New Years Eve television hosts.

The people who manage to get on camera probably staked out their spot and have been waiting around for their closeup for acouple days! Oh and of course it’s winter in NYC so the weather might not be the most comfortable. Tonight the temperature is supposed to be around 30 degress by the time the new year rolls in. These people are probably smiling because they’re delirious with hypothermia. I wish they would take the tv cameras away from the square and all the camera-friendly revelers wearing hats and those stupid new years glasses. I’d be much more curious to see what’s going on down some of the side streets and have them show us what the majority of participants are experiencing and the view they have of this ‘biggest party’. If they’re lucky they probably see the distant glow of lights from Times Square and maybe can hear the muffled sounds of lip-synced musical acts.

Oh, and then I read that there are no public bathrooms around for this million-plus crowd! So, after standing there for hours, if you come to the point you can no longer fight the urge from your screaming bladder and have to leave to take care of business, you’re not allowed back in. You just lost your spot. Gee, what a party this is! On top of that, you’re not allowed to bring any alcohol with you either. I guess it would be pointless to have any anyway since there’s no place to pee.

I was told by someone recently who know folks who’ve gone to Times Square on New Years and described the tales of these bathroom woes. The solution – some of them have admitted to him they just stood there and peed themselves! In the middle of Times Square, surrounded by a million people, they relieved themselves in their pants like an adolescent. I have never heard this piece of trivia when television is reporting on this ‘biggest party’. Never once through the years have I tuned into Dick Clark’s Rockin’ New Years, saw him looking down at the crowd and him saying, “The crowds are in great spirits and are ready to welcome in the new year! What a party! You can smell the pools of urine from way up here!”

I can’t imagine after having been standing around waiting for hours, hoping to be part of this big party, but then finally admitting defeat and leaving to goto the bathroom. That would be bad enough, but then where do these people go? Now you have to find a bathroom. And New York City isn’t the easiest place to find an accessible and clean bathroom all the time. And on New Years Eve all around midtown I’m betting most places are either not open or will be quite reluctant to just let people come in and use their facilities. Maybe they would for a price. Places could make some decent cash that way.

Oh yeah, there’s always public bathrooms. That will be a more memorable experience and leave a lasting mark on all these tourists than this friggin’ Times Square thing!

And then we get to this ball drop. It starts with that ceremonial push of a button by some important guest that’s supposed to activate it.

All BS. It has nothing to do with controlling the ball. There’s guys up on the building lowering it according to the precise time or something. But they have to make this look exciting to the crowds below and the television audience, so they have this ‘pushing the button’ bit.

I don’t even think they bother having fake wires coming out of the box to make the ‘button push’ look more legit, like it’s actually hooked up to some system that will trigger the ball. They really try to make this one-minute countdown look like a big deal. There’s probably about a hundred people who can actually see this portion of the night too. The million other people are trying to get feeling back in their frozen fingers and probably have no idea this is going on.

Every year I see these news reports about the design of this ball. How expensive the waterford crystals in it are, all the time spent making it and all this stuff. The only time I can appreciate the work that went into making this thing is during these news reports.

The ball always reminded me of Spaceship Earth at Disney’s Epcot. But at least there’s a 13-minute ride inside that! That’s thirteen times more the amount of entertainment than you get from the Times Square Ball.

On television during the balls big one-minute of work for the year I can’t make out anything about it. It just looks like a lit generic ball. I’m betting from the street level no one can see all these intricate details of it either – if they can see it at all!

You’d be better off going to see this thing in a window display or something. I don’t even know if they do that actually. One person told me they saw it when they visited the Ripley’s Believe It or Not Museum. It would be smart to have it displayed so the public could get a better look at it and make all the work that went into making it get more appreciated. At least put it out during January. If they don’t do that they really should! It would be better than once it has its annual moment, just crating it up around 12:30am and storing it for next year. So, what are people doing in Times Square again? Oh yeah – the ‘world’s biggest party’. Just because it may be the biggest doesn’t mean it’s any fun. I bet most native New Yorkers avoid Times Square like the plague New Years Eve, leaving it to the tourists to keep this annual party going. There must be thousands of other things that one could do on New Years Eve in NYC that would be more fun than this.

Never once during the years I’ve seen this thing on television did I ever wish I was there. Maybe it would be different if I was in one of those high-up indoor warm booths these television hosts enjoy. Looking down at all these poor saps, sipping champagne and thinking, ‘I’m glad I’m not down there’. But that’s a seat I wouldn’t likely get.

Time-honored tradition nothing, I’d rather stay home, wear my own funny hat and throw around my own confetti. 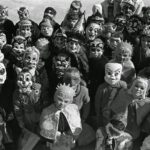 Is Trick or Treating Becoming Extinct?