Three Russians arrive in Paris to sell the jewels of the Grand Duchess Swana. The sale is delayed and they aren’t in much of rush to get back home to dreary Mother Russia. They’re having a bit too much of a good time living it up in a free society

So a higher ranking no-nonsense Russian by the name of Ninotchka (Greta Garbo) is dispatched to get the sale back on track and once done will immediately escort her comrades back home and out of this frivolous capitalist city.

However, an unexpected distraction is caused by Count Leon d’Algout (Melvyn Douglas). Leon is working for the Duchess and is assigned to get her jewels back to her, but once he encounters Ninotchka she sets his heart a flutter. Ninotchka’s stern facade begins to crack as he shows her life in the West isn’t all bad and perhaps it’s time for her to live for herself and not for her country. And yes, love can bloom between the unlikeliest people.

This is a charmer! I’ve never been a huge Garbo fan. In fact, I think I’ve only seen two films of hers. I’m familiar with her career and have watched documentaries about the actress who was dubbed ‘The Divine’, ‘The Swedish Sphinx’, and ‘The Face’, but I haven’t been very familiar with her film roles. I always thought most appeared to be quite heavy, dramatic stories and somehow through all the years I just never watched any. I was always intrigued by how at the age of thirty-six she retired from acting and never looked back. Since departing from the cameras in 1941 the rest of her life she would inadvertently create an even more mysterious persona living in New York, being spotted by ‘Garbo Watchers’ and occasionally a photographer would snap off a photo of her.

It’s difficult not to find that a fascinating story and wonder why she always was such a private person and who she really was. It seems like an extremely rare thing for someone who gained fame in front of the cameras, especially nowadays, to be so completely private. Today everyone is doing their darnedest for attention.

But Ninotchka is one of the films I have seen of Garbo’s and I have always liked it. I know this type of romantic comedy was not the norm for Garbo. The movie used the famous tagline ‘Garbo Laughs’, something of a play of when the silent screen actress transitioned to sound and it was announced ‘Garbo Talks’. They probably could have promoted every Garbo movie with her doing an emotion or action. ‘Garbo Drinks!’, ‘Garbo Dances!’, ‘Garbo Runs!’ and it would have gotten audiences curious.

At the time it must of really been unheard of for audiences to expect to see her crack a smile, so it must of been a huge draw for people to see this. And the laughing scene is a real pleasure to watch on its own, even if it hand’t been the first time Garbo laughed onscreen. She’s very good in this, along with Douglas. It becomes one of those gold nuggets of a movie that just don’t happen much anymore. It’s funny, sweet, romantic with two charismatic leads and an enjoyable story. It’s everything that a good romantic comedy is supposed to be.

Director Ernst Lubistch was a master at this type of movie. We immediately want to see this stern, serious woman loosen up and have some fun. He creates some wonderful, funny scenes with the blossoming romance between Leon and Ninotchka. There is a lot of comedy to be mined by watching her brick wall of emotions repel every lighthearted advance by Leon.

One of my favorite exchanges between the two is after they first meet Leon is quite taken with this strange woman and tries to get a bit flirtatious with her. Ninotchka stares at Leon,
“Must you flirt?”
“Well, I don’t have to, but I find it natural.”
Ninotchka stares at him cooly, “Suppress it.” I could manage a minor gripe with Ninotchka. I enjoy the flirty banter so much, love watching the back and forth with Garbo playing this emotionless woman who Douglas is trying to get to warm to not only himself but the beautiful surroundings of Paris so much I hate to see it end. It’s so nicely done and entertaining that it probably could have filled the entire duration of the movie. Had their flirting and her resistance gone on longer I wouldn’t have complained.

When her switch is flipped it’s something we’ve been waiting to see and Garbo plays it all with enthusiasm and awkwardness. Just her appearing wearing a new hat makes me smile. It’s the ugliest hat imaginable and she looks ridiculous wearing it, which makes it all the more funny and sweet – and it’s so satisfying to see!

Then right when Ninotchka begins to loosen up, experiencing new exciting things and falls for Leon there’s a bump in the road. There’s always a bump in the road in romantic comedies. We have to make it look like it’s impossible for these two people to end up together. And the script and Lubistch make it quite a convincing one as to why this pair is torn apart and won’t be seeing each other ever again. We get to spend some time with the lonely Ninotchka in Russia, where you can’t help but sympathize with her.

The scene of her alone in her apartment ends with a wonderful shot illustrating her sadness that you just can’t miss. This solitary figure sitting alone. And yet the film keeps levity alive with amusing gags and dialogue about the living conditions her country is subjecting it’s people to. Writers Charles Brackett and Billy Wilder must have had a great time coming up with those jokes.

The last thing I have to mention is the supporting cast of characters. It’s cool to see Bela Lugosi pop up, but the real supporting stars are Sig Ruman, Felix Bressart and Alexander Granach as Ninotchka’s comrades. There’s some wonderful comedy involving them. They don’t simply disappear into the background, but provide additional laughs. There’s really smart simple gags.

One very amusing joke is how excited they are to see pretty cigarette girls in the hotel. Lubitsch constructs the joke in such a classy, stylish way. We’re placed in the outside hallway, they three are offscreen and we just hear their louder and louder cheers as more cigarette girls enter their room. Great stuff.

It’s too bad Garbo would retire soon after Ninotchka. Had she stayed in movies I’m not sure she would have done more of these type of movies, but her and Lubitsh crafted a real classic for her one time out. 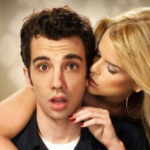