Directed by Robert Altman this live-action adaptation of the spinach eating character premiered during the holiday season in 1980. A joint production between Paramount and Walt Disney Productions, Popeye would mark Robin Williams first lead role in a film.

Produced by Robert Evans with a notable cast of actors, a sprawling seaside set on the coast of Malta, a script by Jules Feiffer and songs written by Harry Nilsson, Altman’s cinematic version of E.C. Segars beloved characters has been viewed as a failure on multiple levels through the years. Williams himself has been dismissive of it, referring to his early struggling years as a film actor as “the Popeye years”.

Is it really that bad?

Receiving mixed reviews at the time, but grossing more than double its budget doesn’t sound like the commercial failure its been tagged as. Does it have any artistic merit? Having such a revered and established director as Altman steering things along should result in something worthwhile for audiences, right? Is Popeye just a misunderstood film that has been unfairly labeled a “disaster”?

Williams wearing giant forearms leads the cast of co-stars of Shelley Duvall, Paul Dooley, Ray Walston, Richard Libertini and Paul L. Smith who all help bring Segar’s Olive Oyl, Wimpy, Poopdeck Pappy and Bluto to the third dimension. I take a trip to Sweet Haven and try to unravel the mystery and my feelings about Robert Altman’s Popeye. 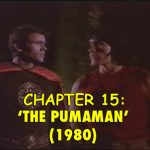 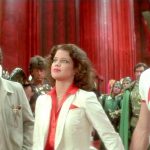