Director John Woo had wanted to film the epic story of the Battle of Red Cliff for twenty years – and it doesn’t disappoint.

I had not been familiar at all with the historical battle, which is well-remembered in Chinese history before watching this film. I only knew the film became a huge hit overseas, it had large scale battle scenes and was said to be the best film John Woo had directed for a long time.

All of that is true. The battle scenes are impressive and the scope of the film rivals that of grand films of the past. I started thinking of it as an Asian version of The Lord of the Rings. There is plenty of CGI help to bring this ambitious story to life, but it’s still used effectively and won’t having you shake your head thinking “wow, that really looks fake”.

Woo fans will see plenty of his signatures in the film (slow-mo, flying doves, crying babies) and they’re all used quite effectively. The action, battles and scenery are the thing that will be first thought of when referring to Red Cliff. The action scenes alone might have been enough to make it worth watching (along with a beautiful score), but it also has some wonderful characters and relationships that evolve through the story.

It’s not an easy thing to create characters that will not get lost in the scope of such a story, but Woo manages to keep them vital to the outcome. This group of individuals with differing beliefs, ideas and ways of thinking coming together working out strategies in a seemingly doomed situation is what made Red Cliff such a great film for me.

Supposedly there is a certain amount of creative license that the film uses to retell the story, how much I’m not sure. However, it’s still an extremely worthwhile film and stands as a real accomplishment to Woo and all the filmmakers who created it.

I watched the uncut international version, which runs about 280 minutes. I split it over the course of two evenings. There is a U.S. version of the film, which is cut down to about 150 minutes. I haven’t seen it and am not sure what exactly is cut to make the film a more manageable time for audiences, but I would say go with the uncut version of the film. It’s definitely worth it! 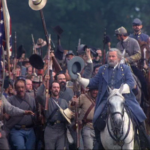