The summer is barely half over and already we’re reading all about how terrible it’s been for the big blockbusters.

Each week we’ve seen the articles about the newest box office flop, apocalyptic predictions that this is the worst summer ever, people are staying home enjoying streaming services, everyone is sick of the over abundance of lazy reboots, sequels and universe building that is happening and that darn Rotten Tomatoes website is ruining everything, pushing audiences away from seeing the latest big shiny studio release with their pesky scoring cluing everyone in that the critic consensus is that the weeks newest big flick is garbage.

This has been the repetitive pattern of the last few summers. Every summer becomes the worst movie summer ever.

Let’s worry about all that when this summer is actually over. Then Hollywood will be ready to lick its wounds, final tallies will be made and everyone will be ready to look back over the last few months and analyze the hell out of it with all those neat numbers and ominous predictions.

Until then, I will say this summer has looked awfully crappy with movies with barely anything I have been interested in seeing. So far it’s been quite easy to just ignore a lot of the big-budget tentpoles that have been released. And there have been A LOT of them that have generated negative receptions by fans. In most cases it doesn’t sound like the quality has been there.

So with all those happy thoughts, what’s in store for July? Tom Holland becomes the newest Spider-Man in a joint production between Sony, Marvel and Disney, that will bring the character into the lauded and popular Marvel Cinematic Universe.

Spidey’s first solo movie in this agreement will allow Robert Downey Jr.’s Iron Man to guest star, they can make references to the Avengers and they’re hoping this association will bring in more bucks than Andrew Garfield skateboarding. After this Holland can join the Marvel cast in Avengers: Infinity War and everyone will be happy, until this agreement ends and Sony goes off on their own to ruin the character most likely.

Since Holland appeared in Captain America: Civil War the hype has been building with this new take on Spider-Man. Fans are hoping that with Marvel in creative charge of the character this new deal will give them the Spidey they deserve.

I like Spider-Man, but after having five movies with him within in the span of, what has it been – thirteen years, seeing the latest installment of the wall crawler on film has worn down the excitement for me. Homecoming could reignite that, but as of now I’m sort of sitting with shrugging shoulders with this new incarnation of Spidey. The marketing of Homecoming has been awful. The trailer did not help me get pumped for it. It was a terrible cliff notes trailer where now I feel like I’ve been given the whole story. It was less a teasing invitation to come see this movie and more like a quick rundown of it.

Also the poster for this is horrible! It has deservedly gotten a lot of criticism from fans. It’s just plain bad! What were they thinking??? It looks like a cheap knock-off superhero movie. Or a straight to video low-rent thing. Did they run out of money to create a halfway decent poster?

I think Sony is handling the marketing of Homecoming and boy they are just not doing anything right. They’re giving away cameos, plot twists, heavily featuring Iron Man in all the promotion. I know they want this to be a hit, but how about reeling things back a bit.

This could very well be an entertaining Spidey yarn, but sadly I’m feeling a bit indifferent about it. Sure, I’ll see it eventually, but in a lot of ways I feel like I’ve seen it already thanks to the marketing brains at Sony.

War for the Planet of the Apes The apes are back and this time they’re ready to fight humans with guns, rallying speeches and a drive to make them the dominant species on the planet. Now it’s time for war with the apes and we have Woody Harrelson repping us on the human side.

I have enjoyed this rebooted Apes franchise. I think it’s classified as a ‘reboot’. I’m not counting Tim Burton’s 2000 remake, but these last two Apes films, the ones with James Fanco, Jason Clarke and Anthony Serkis, who has become the lynchpin in this franchise as the ever-evolving Caesar, were both pretty good.

I’ve almost forgotten that these are ‘reboots’ of the old series. These movies have had different takes on the apes story, they’ve given us things that we haven’t seen before and have expanded the whole concept to make it feel fresher than the usual typical, tired reboot that Hollywood usually gives us. When they firsts announced that first apes reboot, I immediately thought, “Oh boy….here we go”, but since then I’ve been very impressed and have looked forward to the next entry.

And this one again looks good. I’m anxious to see this and it looks like, along with the cool battle scenes, it will have some dramatic weight behind it all. People complain about the overuse of bad CGI today (I’m one of them), but these Apes films are some of the best examples of how to use it right. Caesar is not just a visual effect, but an actual character, who I’ve been happy to follow from his re-introduction to movie screens to this latest installment. I hope this doesn’t disappoint.

Valerian and the City of a Thousand Planets It’s the future and two agents are sent on a mission to a planet where a thousand inter-galactic species are sharing their knowledge with one another. It’s a great benevolent idea, but it’s being threatened by some unknown being. Valerian (Dane Dehaan) and Laureling (Cara Delevingne) are tasked with finding out what is going on and secure the safety of the universe.

Directed by Luc Besson, Valerian is based on a 1967 comic series. I’m not sure about this one. Based on the trailer it didn’t catch my interest. I’m not familiar with the story and I don’t know how much the general audience is. That could be a detriment to it and make it appear like just another summer sci-fi adventure. Besson’s name attached does little for my interest. Back in The Professional days, sure, but today I associate him more with B-grade, lousy stuff like Lockout, 3 Days to Kill, Columbiana and those Taken sequels.

It could very well be a decent movie, but if I had to make a prediction I’d say this will do better in the overseas market. Here, in the U.S. it won’t go over too well. I would peg it to go the way of many other space adventures in recent years like, Jupiter Ascending, John Carter, Tomorrowland and Ender’s Game. Four friends travel to New Orleans, they drink, laugh, dance, let out their wild sides and have a grand old girls trip.

This is looks like a similar premise as Rough Night that just preceded – minus the dead body. This isn’t a movie for me. It’s one of those flicks from that Hangover/Bridesmaids cloth. It’s got the sex jokes, body function gags and vulgar punchlines. Ladies, go have fun. I hope you enjoy yourselves and have a great time watching this. I’ll be skipping it and probably will never encounter it ever. Summer audiences will get schooled about the Dunkirk evacuation during WWII in Christopher Nolan’s latest cinematic event.

I don’t know how this dramatic heavy war movie managed to find itself being released in the summer and not in the award waving fall. I guess that shows that Christopher Nolan’s name alone is as much of a draw as seeing Tom Cruise running away from explosions. It also shows its not just critics who like his films, but general audiences too.

I love WWII movies and this looks like it will be a impressive one. All the trailers I’ve seen for it looks like this will be a visually stunning, memorable event movie, along the same lines that Saving Private Ryan achieved. I am really looking forward to it. No idea how emoji’s became such a thing. This is what we get from all that texting and tweeting.

Yeah, so….a little emoji face sets out to have a different face or something.

I don’t get this. I’m not the audience for this. I guess kids will like it. I see them wearing shirts and hats with these things on them. I don’t really care. These characters just look annoying….all of them look like they would just grate on my nerves if I had to sit and watch them for an hour and half.

One thing I’ll predict here – I bet if this movie stinks a lot of reviews will do the easy joke of using mad face’s and poop emoji’s to describe their feelings about it. Ok, so that’s not too radical a prediction or a unique joke, but this movie doesn’t look like it deserves much more time than that. It’s 1989 and the Berlin Wall is about to come down. Charlize Theron is a lethal MI6 spy on a mission in Berlin and she demonstrates deadly skills with guns, her fists, all the while looking very sexy doing it.

This looks like it could be a stylish fun flick. Hopefully there won’t be a lot of that shaky handheld camera work during the action scenes that can ruin things.

The most striking thing to me about this movie is when I saw the movie poster. It immediately reminded me of the poster for Showgirls. I can’t be the only who has made that connection. 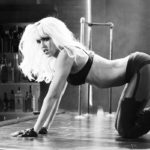 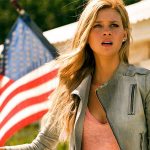 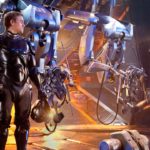