Producer Dino DeLaurentis returns to my superhero series with an attempt to bring Jean-Claude Forest’s popular ski-fi vixen to the big screen.

Resembling actress Brigitte Bardot, the French comic strip recounted Barbarella’s wild outer space adventures that always had a sexual edge. Considered to be the first ‘adult’ comic book, in 1968 director Roger Vadim adapts the character for movie audiences with his then wife Jane Fonda in the title role.

The era of psychedelic images is on display was guaranteed to give audiences a wild trip. John Phillip Law, Anita Pallenberg, Milo O’Shea and Marcel Marceau round out the intergalactic cast for what would be destined to become a cult classic.

Do flying angels, sex machines, killer dolls and a weightless striptease by Jane Fonda hold up or did you just have to be there? 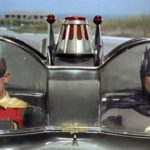