There’s been consistent talk about Avengers: Age of Ultron since the end credits rolled on The Avengers. There’s been no shortage of excitement for Joss Whedon’s followup to his Marvel super hero-packed film that I felt there’s very little to say about it that hasn’t filled up fan message boards already.

However, with the release of the official poster I thought I would chime in. The Avengers: Age of Ultron movie poster has received quite a bit of criticism. There has been a great deal of disappointment by it and statements about it being a badly done phototshop cram job.

It’s obvious Marvel and Disney decided to feature all the actors and characters on the poster. No one is really left out. Even the Vision who we haven’t gotten a good look at yet, is hovering in the background. It’s not surprising they would want to squeeze in every superhero they could, but sadly the way they did it here isn’t as thrilling as it should have been and the poster doesn’t leave much of an impact.

It does look to be a bit of mess and really could have been a lot better. The heroes photos look like they were taken from separate publicity shots and just refitted around each other. Hawkeye and Black Widow look to be doing their own thing. Scarlett Witch and Quick Silver appear to be floating in the top of the image. And Nick Fury is just standing off to the side with that ‘Samuel L. Jackson gaze’ staring us down. The early battle scene photo they presented us last year would have been a better way to go. All the heroes were there, it looked much more exciting and the artwork looked dynamite. Even had they gone the simpler route of featuring an after-battle backdrop with The Avengers iconic weapons in smoldering ruins could have been more memorable. Like in the trailer catching a glimpse of Cap’s broken shield is pretty unforgettable.

Alas, no. They decided on the safe route and squeeze all the Avengers in awkward poses and this will be the official poster. It certainly won’t deter people from seeing the movie. They could have just had the poster have the title of the movie and fans would be lining up to see it. We have to expect fans to be hanging copies of this on their walls so it would have been nice had the poster been a bit more special

I’m kinda surprised they didn’t get to insert a Hulk-less Mark Ruffalo somewhere in here. 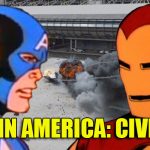 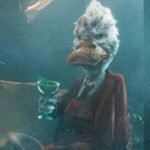 Howard the Duck Crashes Guardians of the Galaxy