The Ventana nuclear power plant is getting a visit from a local news crew. Kimberly Wells (Jane Fonda) is taking a break from doing fluff pieces and wants to do a report on the hot button issue that all Americans are concerned with – nuclear power.

Wells, her hotheaded cameraman Richard (Michael Douglas) and soundman Hector are present when the plant goes through an emergency shutdown. Shift supervisor Jack Godell (Jack Lemmon) notices an unusual vibration. Suddenly workers are scrambling, alarms are going off and Godell is panicked. Things get back under control, but unbeknowst to anyone Richard had been filming the event the whole time.

What follows is Kimberly and Richard trying to get to the bottom of what exactly happened and Godell discovering the plant isn’t as safe as he once believed. With a new plant on schedule to open within a few weeks those in charge don’t want to jeopardize the billions the company will be earning and are ready to silence the reporters and the whistleblower at whatever costs.

The China Syndrome has become synonymous with the debate of nuclear energy and in particular the Three Mile Island nuclear accident that occurred twelve days after its release. But leaving aside the topical issue the movie delves into and what it wants to say about it, it’s a very effective thriller.

Director James Bridges presents the film in a docu-drama style to create an air or reality. There’s no musical score, no big showy performances. The cast really grounds things. Both Douglas and Fonda are good. Douglas is the paranoid skeptic that doesn’t trust anything he’s told. Fonda is the reporter who wants to do more important assignments, but is apprehensive to jeopardize her cushy spot at the station.

Lemmon is the one who really shines out of the entire cast. He is excellent. We see how much he loves his plant and is willing to defend it against Kimberly’s accusations of it being unsafe initially. Once he discovers that safety regulations were circumvented in order to save costs and to get it operating in a hurry he feels betrayed.

It’s almost like he’s just discovered his wife has been cheating on him! He’s angry, upset, you feel for the guy. At times I get more upset with how his bosses flippantly dismiss Lemmon’s concerns than the risk they’re putting the public at.

Although reluctant at first, he’s finally willing to spill the beans to make the ones responsible accountable. Lemmon has always been great and I think this is one of the best performances of his career.

At that point that’s when the film kicks into thriller territory with older rich powerful guys ordering their cronies to silence these troublemakers. They’ll do anything to prevent any problems with the Nuclear Regulatory Commission, making sure they cover up their tracks, clearing the road to getting their new plant open and worrying about their profits. You really start to hate these jerks and are pulling all the way for our heroes to get their story out.

The film is about television news as much as the nuclear issue. The film opens and ends on a television monitor with Fonda reporting on two dramatically different stories. Fonda is constantly trying to break free of fluff and do some ‘hard news’.

A consistent theme that runs through the film is entertainment over information and the importance of ratings. Fonda is expected to do stories about birthday parties for tigers at the zoo, wear her hair a specific way and as her boss says about her, “she’s a performer and she’ll do what she’s told”.

It’s a really good movie. It’s packed with great performances, riveting scenes, a suspenseful story and forces you to think of the nuclear question. The potential danger the movie describes has come close to happening numerous times and nuclear accidents we’ve had since its release make it all still feel relevant today.

The movie lays it out for you that no matter how good of intentions one has and all the fail safes installed there’s always the possibility of some outside uncontrollable force to put it all at risk. Or it could even come down to simple human error to set things on the road to catastrophe. 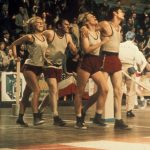