An airplane traveling from Hawaii to San Francisco through stormy skies. An engine blows. Fuel begins leaking. The plane has already passed the point of no return with no choice but to travel 2,000 miles over the open Pacific Ocean before making it to land. The only other alternative is to try a crash landing in the extremely rough cold water below.

This is not the relaxing flight the passengers expected.

The High and Mighty is one of the earliest ‘disaster’ films. It predates the 1970s ‘disaster craze’ by twenty years, yet, it has many of the same basic elements that would show up in the standard disaster film. A haunted main character. An eclectic cast of supporting characters. A seemingly hopeless life threatening situation. Yep, that’s all here.

Based on the best-selling 1953 novel, The High and Mighty tells the story of a flight from Hawaii to California during which the plane loses an engine and starts losing fuel.

The young nervous Captain John Sullivan (Robert Stack) anticipates trying to just ditch the plane in the ocean and everyone taking their chances they’ll survive not only the landing, but surviving long enough in the rough waters before help can get to them. The veteran first officer Dan Roman (John Wayne) convinces him they would be better off trying to make it to the coast of California. While the pilots try to figure out ways to stretch what little fuel and time they have left, we meet the band of passengers who as they await what’s in store for them recount their own personal stories.

Directed by Willam Wellman and filmed in CinemaScope the film does look very nice. The shots of the plane traveling through bright blue skies with beautiful clouds is a dazzling sight. The widescreen format helps to include all the passengers in scenes inside without any getting lost. The big presentation helps to give The High and Mighty an epic feel visually, so I started to prepare myself for an exciting two and half hour ride.

Wellman spends as much time on the passengers as the plane itself. The story is not as focused on the events that are taking place and the dangerous situation that these people are now in, but it felt like it was more concerned with telling us about who these people are when they stepped onto this plane.

Obviously there are some story arcs that they go through as the film goes on, but they aren’t anything so special or memorable. This format plays as pretty dated and I couldn’t help but have restlessness start to creep in. I hate to say that since it sounds like I’m disappointed with a movie actually trying to make these people – who were all played by very popular character actors at the time – actual characters with stories, histories and personalities to fill this airplane rather than just nameless screaming passengers.

It attempts to be a Grand Hotel in the sky. The format of getting to know all our passengers and crew is somewhat refreshing.

These characters could have easily become background stereotypes, but the film spends a great deal of time on who these people are and how they ended up here. However, despite learning more about them it doesn’t mean the movie makes them or their stories any more interesting and engaging.

The film constantly diverges into these backstories that aren’t always as compelling or interesting than what is currently happening to these people at the moment with this plane problem.

There’s the young newlyweds, The aging beauty queen on her way to meet her through the mail fiancée. The rich wife domineering over her meek husband. The unbalanced passenger. The attractive older film actress and the womanizing executive across the aisle who has his eyes on her. The unassuming Asian passenger still ostracized by bigotry. The married couple who finally made their dream Hawaii vacation happen. A little boy traveling alone.

We learn about all these folks and more. Perhaps I would have been less impatient if this was just a regular, run-of-the-mill flight and I’m sitting with them to kill time, so I’ll listen to their anecdotes about where they came from and whatnot. But here there’s a lot of other things going on to keep me distracted – you know we might crash into the ocean! For every passenger that I started to get invested in their story there was another I just didn’t care for and that number kept growing. It’s really surprising how much time is spent on them. The film isn’t as much about the situation of them all possibly dying in a potential plane crash, but it becomes the catalyst for them to reflect back on their past and convey their stories.

This started to really drag the film for me and it got very tedious. It is an overly long film and the majority of it is spent on the passengers. While all these passengers were recounting their personal stories I kept thinking there must be something more interesting going on in this plane to focus on.

Despite me sounding like I was completely bored with it there is some good stuff in The High and Mighty. Overall all the actors are decent in their roles. Some parts call more for ‘soap opera-y’ kind of storylines so that doesn’t help things though. I think Robert Stack gives the best performance in the movie. And Doe Avedon as the flight attendant is very attractive and has a calm, capable demeanor about her throughout the whole flight.

I had never seen her before and got curious enough to look up some info about her. I guess she retired from acting in the late 1950s, since she pretty much disappeared after that.

The score, which won the Oscar will probably have you humming it afterwards.

Overall. after experiencing the 70’s disaster movie craze and topping that off with Airplane!, The High and Mighty plays as a very antiquated, corny ‘disaster’ yarn. I didn’t enjoy it as much as Zero Hour that arrived a few years later and which I find a much more entertaining ride, despite the notoriety of it being used for the basis of comedy years later.

I wouldn’t consider The High and Mighty the ‘classic’ I had heard it was before watching it. It probably played much more exciting and thrilling back in 1954. While watching it today I kept thinking I’d rather be watching Stack in Airplane!. 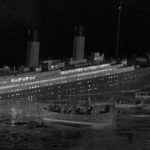 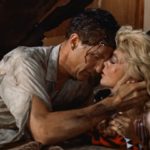 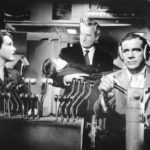