I was never much of a parade lover. I just can’t get too excited to watch a line of people marching down the street and doing that endless waving to the crowds. It starts to get pretty monotonous after awhile. I think watching one parade equals more hand-waving than you’ll ever see in fifty lifetimes.

It’s not like I do much hand-waving in my day-to-day life. I’m not sure what other situations that would arise where you would feel compelled to do so much waving. Maybe in a crowd trying to attract a friend’s attention or perhaps waving at a kid on a ride in an amusement park.

But as with yearly tradition, the Macy’s Day Parade is something I usually stumble onto and after watching a few minutes of the folks in the parade I usually think to myself – these people’s arms must get really tired.

Someday, someone will revolutionize parades and come up with something for people to do other than wave for three straight hours.

It’s the giant balloons that are the real draw here and everyone knows it. I’ll admit I get a kick out of seeing a huge Spider-Man balloon being guided down the streets of Manhattan. If they took the balloons out of the parade I don’t think the crowds would be nearly as big. My cynical nature makes me look at some of the balloons with pretty narrow eyes however. What is the Aflac Duck doing here? Or the Pillsbury Doughboy? I get wary of seeing characters that endorse products blown up and hauled around for the kids to gawk at. It just starts to feel a bit commercialized and a way for them to advertise their products in a seemingly innocent fun way.

M&M’s, Ronald McDonald, the Energizer Bunny, Snuggle Bear, the Nestle Quik Bunny. These guys don’t give me the same kick as seeing Underdog flying through the streets of New York. Who by the way, I keep praying they would bring back one year! He was my favorite balloon when I was a kid.

The coverage of the parade I have to say…..stinks. Instead of just locking down a camera in one spot and showing the television audience the procession of floats and balloons, NBC stops everything for “live” performances. Every few minutes we’re treated to Neil Diamond singing on a float, a marching band playing a song or the cast from a Broadway show performing a musical number. Fortunately, the ‘mute’ button is always handy when the hosts decide to do some well-rehearsed witty repartee about the floats and the balloons. They always have to throw in some terrible jokes about them too.

“Gee, Shrek here looks huge Katie. I’m not sure one Thanksgiving dinner will be enough to fill up his stomach!”

I would be much more keen on the parade if they just dropped everything except the big balloons. Keep one camera, maybe a second, and just keep them focused on the balloons. Drop the awkward commentary, the dance numbers, all the waving and load the procession with wall-to-wall balloons and just keep them moving.

I suppose they could keep Santa Claus bringing up the rear. 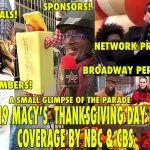 How Much Of The Actual Thanksgiving Parade Do The Networks Show?