So George Lucas has put Disney in charge of continuing his Star Wars saga. With an exchange of 4.05 billion dollars, Disney got ahold of Lucasfilm, which means they now hold the rights to the most famous film series in the history of cinema.

Along with Star Wars, the deal also gives Disney all off George’s companies that fall under the umbrella of Lucasfilm. They also get Industiral Light and Magic, Skywalker Sound, LucasArts and the rights to Indiana Jones. I think Disney got a pretty good deal for only 4 billion bucks. It actually seems kind of low to me.

Not wasting any time with this new acquisition, Disney announced it’s not just planning on making onenew Star Wars film, but a whole new trilogy. The first film – Episode 7 – is set for release in 2015, after which the sequels, Episode 8 and Episode 9 will follow every two to three years.

Along with that Disney wants to develop new Star Wars properties – theme parks, rides, television and of course new merchandise. The possibilities are endless and it looks like the mouse is willing to explore all of them.

No word yet on what they’re planning on doing with Indiana Jones. Although, I predict they didn’t buy him just to make theme park rides. This is pretty big news to Star Wars fans and naturally talk and opinions are widespread. Reactions are running from optimism and excitement to physical pain.

I grew up with Star Wars. Like many from my generation, Star Wars was a huge part of my childhood. I was taken to see all the original movies in theaters. I bought the toys. Played Star Wars with my friends. We talked nonstop about Star Wars. Long discussions commenced of what would happen in the next movie during the three year wait between films.

It felt like an eternity to finally find out if Darth Vader was really truly Luke’s father or was he just lying. I loved the original trilogy and still do.

After Return of the Jedi ended I gradually accepted the likelihood of never seeing another new Star Wars movie ever again.

Then in the early 90’s there seemed to something of a Star Wars resurgence. New toys started popping up. New Books. Then the announcement of The Special Editions. From around that point everything Lucas has done in regards to Star Wars has pissed fans off.

Some of the strange alterations he made to the films that some consider sacred sparked outrage. I’ll admit I thought some of the changes were good, mainly the ones that polished the older effects. The snow speeders were no longer transparent. But other major overhauls just didn’t make sense to me. The notorious Greedo shooting first scene not only was a pointless thing to change, but it looked really, really bad.

At the time fans weren’t aware the original untouched original films were basically going to be disowned by Lucas and he would continue tweaking, changing, altering, adding to them, getting to the point where it all just got completely ridiculous. Now any new release of the original trilogy is greeted with eye-rolling by the fans with speculations of – what did he change this time?

Then the prequel trilogy came along, and despite Lucas making the films the way he wanted to make them, he somehow forgot that he wasn’t the only who was going to be watching them. Older fans felt cheated and disappointed by what many thought were pretty awful movies. They were hits, everyone went to see them and they sold a lot of toys, but they are garnering a much different legacy than the original trilogy did.

I went to see Phantom Menace and honestly after that first screening on opening day I walked out not hating it. I thought it was ok. Later thinking about it and seeing it again that’s when it hit me that I didn’t like it. I think I was caught up in the hype and excitement of it all.

I still like Phantom better than the second film Attack of the Clones for two reasons: Darth Maul and John Williams Duel of the Fates score. That’s all it takes. Clones I thought was completely unwatchable. It was an endurance test with nothing happening through the whole thing other than a painfully forced love story and a Tasmanian Yoda jumping around.

After that I gave up on Star Wars. I never went to see Revenge of the Sith. I eventually caught portions of it on TV and have pretty much pieced together the movie from those fragmented viewings. It never felt worth to watch it from start to finish.

Now Star Wars was done. Lucas would leave the world of big blockbusters behind (after doing Crystal Skull) and would go onto working on his smaller film projects. I never bought that line I’d hear Lucas would drop every now and then. Way back in 1977 after Star Wars was an enormous hit and made Lucas truckloads of cash he could have filmed any story he dreamt up anytime he wanted. He never did. He choose to focus on Star Wars and be the Emperor of all his companies.

Those smaller, more personal projects seemed to be put away in a drawer and no longer seemed that important to him. Unless he was counting Howard the Duck, but even that was over twenty-five years ago.

We’d get a Star Wars cartoon and an assembly line of merchandise that never stopped running. Not to mention all the tinkered versions of the the films, but that was it. No new Star Wars movies.

It appears the general reaction by fans for this Disney/Star Wars movie ranges from outrage to jubilation. I would imagine younger fans are excited about it. My nephews love Star Wars. Not any particular films, but just the whole package. Anything with the Star Wars brand is great in their minds.

I know all the ‘original’ characters and aliens from the original trilogy, but when they would be playing with all their Star Wars toys I don’t recognize most of them. I don’t really care about the Clone Wars, the New Republic or any of that stuff. I imagine a new trilogy will be embraced by the kids and it will surely create a new generation of Star Wars fans.

The older or the ‘original’ fans, seem to lean towards the angry side. Lucas has pissed them off so much that most probably see this as simply another step in him ‘selling out’. ‘The Creator’ giving his prized cultural masterpiece – the one he built an entire Empire on – to Disney, which potentially could do horrible things with it.

Visions of nightmare scenarios are flashing through fans heads. Could we soon see Star Wars characters walking around Walt Disney World posing for pictures with tourists? Will Leia start showing up in Disney Princess movies co-starring with Cinderella, Snow White and Ariel? Could there possibly be a Goofy/Jar Jar team up movie???

On the bright side, Lucas won’t be the overseer of this new trilogy of films, so more creativity might be allowed to spark with new talent other than Lucas’ tunnel vision perspective dictating every step.

For me, I don’t think I really care what Lucas does or if Disney makes a new trilogy or makes a dozen new trilogies. Star Wars was great and I love it, but I don’t think it can give me much more than it already has. I’m always going to have affection for it, but ‘Star Wars’ to me means those three films I saw in 1977, 1980 and 1983. Those three movies are the lynch pin where all this other stuff hangs from. Besides Star Wars, The Empire Strikes Back and Return of the Jedi, everything else Star Wars-related is moot to me.

The best of times was back when I was little playing with all my Star Wars toys. Finally scoring that one figure that I had been wanting. My friends and I imaging we were the characters, making up our own Star Wars adventures, trying our best to imitate the sounds of the laser guns and lightsabers. All the neighborhood girls playing a squad of Princess Leia’s, each one describing the gowns they were pretending to wear for us – which we didn’t care we just needed princesses to save.

When it was snowing we would pretend to be trekking through the cold landscape of Hoth ready to do battle with an army of AT-AT’s.

Then when it was one of those special nights when Star Wars would be on TV everything would come to a halt. We’d prepare making snacks and race to sit right in front of the TV and just marvel at the world Lucas created. I have to thank George for all of that.

Whatever might happen now with Star Wars seems unimportant. I don’t like how Lucas has treated the original trilogy and can completely understand why fans would be upset over that. Lucas brought that on himself though. He alienated a large portion of his fanbase with some of the decisions he’s made with the series. Looking at some of them, they do seem like a slap in the face to the fans.

It might have been a good idea if he had handed Star Wars over to someone else years ago. Someone who felt more passion and enthusiasm for it than he appears to. If he felt that Star Wars and his companies were holding him back from doing other projects that he really wanted to do, then he could have left it anytime he wanted.

The state of Star Wars is already pretty low in my mind. Whatever Lucas or now Disney chooses to do with it can’t make things much worse. In a way I think Disney bought damaged goods. They’ll make billions off of it, but I don’t think Star Wars has the same quality and importance as it did thirty years ago.

Lucas’ prequels didn’t make the brand of Star Wars any better in my mind. Really those three films made it much worse. Maybe Lucas being out of the picture is the best thing that could happen for Star Wars.

Whether Star Wars goes on or not in whatever form of projects now I don’t think it will matter much to me personally. I’ll still enjoy the original trilogy as I’ve always had. I might check out this new trilogy when it comes around though. I suppose I’ll give it a chance. It has to be better than the last one Lucas gave us right? Or is that statement tempting fate?

Now I’ll be curious to see if Lucas will finally get around to making those ‘smaller, more personal films’ he’s always talked about. 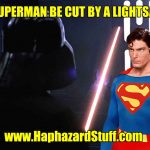 Can Superman Be Cut By A Lightsaber?