Gary Cooper was one likable movie star. Throughout his career he brought his ‘aw shucks’ screen persona to over one hundred films. He would win the Best Actor Oscar twice, move easily between different genres and become one of the most popular film stars during his time.

One thing I always take notice of Cooper in any movie I see him in is that he always looks completely natural in whatever clothes he’s wearing. Dirty cowboy clothes, tuxedos, military uniforms, suit and ties, baseball uniforms. I don’t know what it was about the guy, but he could pull off looking cool in anything.

Anyway, by 1940 Cooper was already a big name and the fact that he essentially plays second fiddle to the memorable character actor Walter Brennan is what makes The Westerner particularly interesting to me.

Brennan would win his third best supporting actor Oscar and Cooper would get overshadowed in the movie. However, the pairing of Cooper and Brennan worked so well the two would go on to star together in five more films.

Drifter Cole Harden (Cooper) is charged with horse stealing and has to face the corrupt Judge Roy Bean (Brennan). Bean has declared himself the law in the small town of Vinegaroon, Texas. He maintains a stranglehold on the rules the townsfolk have to follow, dishes out lethal justice at his leisure and is battling the ever-increasing amount of homesteaders arriving in the area. Bean is trying to prevent them from settling on the outskirts of town and is worried they threaten the livelihood of the cattle-ranchers of Vinegaroon. Harden claims to have met a beautiful actress by the name of Lily Langtry that Bean is manically obsessed with. This white lie saves Harden’s neck and becomes the basis for an unusual ‘friendship’ between the two.

In between talking about Langtry with Bean, Harden meets pretty homesteader Jane-Ellen (Doris Davenport) whose family could really use him around to help them shucking their corn crop. Harden soon finds himself in the middle of the warring homesteaders and cattle-ranchers.

Fruitless attempts to help make peace and find a common ground between the two fail until finally Harden has to pick a side and take some action.

Directed by William Wyler I wouldn’t consider The Westerner a great western. The story itself isn’t that special. Homesteaders being persecuted by opposing adversaries who maliciously treat them and try to run them back to where they came from. That part of the movie isn’t what kept me interested while watching it. The key aspect to the movie and what kept the appeal for me throughout it was this odd relationship between Judge Bean and Harden.

Cooper and Brennan are both fun to watch as they play their scenes out. The main disagreement between the men isn’t particularly unique. We have Harden trying to convince Bean to try to see the homesteaders viewpoint and realize there’s enough land around for them to live on. Bean fires back and dismisses the suggestions.

The strangest exchanges come out of Harden recounting his encounters with the mystical Langtry and Bean hanging on his every word, but the actors draw me into these scenes and I ended up being as fixated as Bean was when Cooper begins talking.

Wyler stages some decent scenes, the most notable is a crop fire. There’s some obvious backscreen projection going on, but looking past that obvious use of that antiquated tool it’s pretty well done. Renowned cinematographer Gregg Toland shows off some terrific looking wide open scenery. The ‘lock of hair scene’ is a unique, sensuous intimate moment between Cold and Jane-Ellen with Cooper doing his natural ‘Coop’ thing better than ever.

Cooper is good, but Brennan is the real star of The Westerner. He’s such a powerful presence, playing such a rich character that he pushes everything else off the screen. The sly looks he gives, his excited hand gestures, his uncaring approach to declaring death-sentencing verdicts that contrast his schoolboy fixation on anything Lily Langtry – it all creates one great character. He should of been top-billed in The Westerner, but I guess that was never going to happen when Cooper was around. 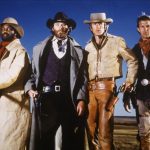