Struggling writer Larry (Billy Crystal) has become obsessed with his ex-wife Margaret (Kate Mulgrew). Her own writing career has taken off like gangbusters. She’s author of a bestseller and is now reaping in tons of cash. – and it’s all due to a book that Larry actually wrote! Yep, Larry really hates Margaret.

While he’s left fuming and is stuck teaching a college writing class – where there’s not a Hemingway in the bunch – one of Larry’s students is Owen (Danny DeVito). Owen has his own personal problems with his Momma (Anne Ramsey). She’s a domineering, frightening, battle-ax of a woman who’s constantly putting Owen down.

Owen also is having some problems with his writing and goes to Larry for help about his murder story he’s trying to write. After getting the recommendation from Larry to watch an Alfred Hitchcock film, which happens to be Strangers On A Train, Owen wildly misinterprets Larry’s advice.

Instead of just learning all about the importance of motives and alibis Owen mistakenly thinks sending him to watch this movie is Larry’s way of making him the offer for them to swap murders – Owen kills Margaret and Larry kills Owen’s Momma. They’ll both be in the clear and get these pain-in-the-ass women out of their lives once and for all. Unfortunately, once Owen starts to put this plan into motion it’s all news to Larry.

I remember me and my friends going to see Throw Momma From the Train. We loved the title, loved the premise and with DeVito and Cryatal as the stars we were expecting to have a great time. And we did. It was a funny movie. The pair make a good team. DeVito plays much more a naive man-child than his cynical, abrasive parts he’s known for. There were some funny quote-worthy lines in it and overall it was a satisfying comedy.

It still is. Recently rewatching it all these years later I still mark it up that while it’s a good comedy, it never gets to be a great one.

Directed by DeVito Throw Momma never amps up the hilarity from its great setup. I don’t mean to say it doesn’t provide the funny sight-gags, one-liners and panic that Crystal is now forced to contend with. But somewhere around the middle portion of the movie it begins to coast and doesn’t seem to know much more of what to do with its story.

The whole second act of the film is Crystal and DeVito hiding out in the house with Momma. This is where Owen is pressuring Larry to keep his end of the  deal after Owen appears to have done away with Margaret. So now Crystal is reluctantly trying to kill Momma. There’s some funny bits, notably with Ramsey insulting, hitting and yelling at the two of them. My favorite moment is her yelling at Crystal, “Get out of my way, you black bastard!” It’s such a bizarre out-of-nowhere remark.

But things never build up anymore than those scenes in that house. The movie doesn’t escalate to all out madcap hilarity in its climax. With these three characters making a dash from the law I was prepared for plenty of hilarious predicaments, but things just start to chug along to a rushed ending.

DeVito throws in some artistic showy flourishes throughout the movie. There are those moments when you’re watching, they happen and you say to yourself, “Oh, that’s a cool shot.”. Some are really quite a lot of fun. The cast are all entertaining to watch and play well with each other. Ramsey makes her Momma a striking memorable character. She was nominated for a Best Supporting Actress Oscar for this. This was when comedy performances actually got recognized from the Academy – a lot more than nowadays at least.

The good thing is that Throw Momma From The Train sets out to be a black comedy and doesn’t hold back with that goal. There’s some amusing homages to Hitchcock that fans of the Master of Suspense will enjoy too. While it might not be one of the best comedy from the 1980s, I don’t think anyone will feel robbed of their time watching it.

One thing I thought of while rewatching this was all the strange parallels that Owen and Momma have to Norman Bates and his mother. I wonder how the story would have turned out had Owen gone to see Hitchcock’s Psycho instead. 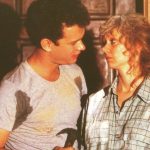