There hasn’t been any shortage of Titanic shows lately. It seems like the 100th anniversary of the ship’s sinking isn’t going unnoticed.

As everyone knows, late on the night of April 14th1912 Titanic struck an iceberg. A few hours later at 2am on April 15th, Titanic disappeared into the North Atlantic and with its sinking killing over 1500 of its passengers. It was the largest peacetime maritime disaster in history, it became worldwide news and has left an enduring legacy not only in the safety regulations of ships, but has made an indelible impact in pop culture as well.

A hundred years later people are still fascinated with the story. Everywhere you turn you’re going to be watching a new documentary about Titanic, reading more stories about it or seeing James Cameron’s 1997 Best Picture winner in 3-D or just watching a new movie about Titanic to mark the anniversary (this new ABC made-for-TV movie really doesn’t look worth anyone’s time though). Titanic is a captivating story. I’ve always been interested in it and clearly I’m not alone. A lot of folks much more qualified than me have attempted to explain the allure the public has with the Titanic story that has lasted a century. But I’ll add my two cents anyway!

Just the name Titanic gives the impression of immortality, strength, and indestructibility. You wouldn’t name your little dingy rowboat Titanic. The fact that it was so trumpeted and declared “nearly unsinkable” (the White Star Line never technically said it was “unsinkable”, just “nearly unsinkable”) and that it sank five days into its maiden voyage one can’t help but see the irony in the story.

Despite it being the top of the line, latest engineering feat, with promises of being great never got fulfilled. Titanic didn’t get a chance to be remembered for that, but for its tragic end. I never hear anyone talk about Titanic’s older sister ship The Olympic. It was the largest ship before Titanic and sailed for over twenty years, even being used as a troop transport during WWI. In 1937 it was retired and scrapped. Titanic’s shorter and tragic story is much more interesting. Plus, there’s a romanticized idea people associate with ships and the ocean. It’s like an old-fashioned love story.

In 1912 people were mainly on ships to get from Point A to Point B, there really weren’t any other options. Ocean travel and train travel are practically extinct now. People just hop on a plane or get in their car and try to make the time pass as quickly as possible until we get to their destination. If we get on a cruise ship today – that’s the vacation.

So I think there’s that element of reminding us that getting there was once part of the experience of travel. The idea of being catered to with luxurious shipboard services makes the idea of a long trip seem much more inviting.

It’s much better than say the guy in the seat in front of you leaning back his chair into your serving tray or the girl behind you tapping the back of your seat with her foot! Not to mention the screaming kid running around! Where is his mother?!?! I wonder if Titanic’s steerage had it this bad….. That’s what this disaster was really about, the people who died in the ocean because of the sinking. Titanic is constantly described as a microcosm of society, and I think that’s pretty accurate.

There was the rich upper class to the impoverished third class. Those with money and those without it were onboard Titanic. Although, the richer folks were more likely to be offered a seat on the few lifeboats, it didn’t guarantee their lives were going to be saved based on what their status was. The rich and poor both met the same fates.

The amount of time the passengers knew the end was coming also adds so much more drama and emotion to the story. It took almost three hours from the time Titanic hit the iceberg to its final submersion into the ocean. That is a lot of time to think about what you’re going to do, how you’re going to act, what’s going through you’re mind. Time becomes more valuable than ever as the minutes tick away until an inevitable end.

It makes us consider – “what would I do?”. The most haunting stories in regards to Titanic happen in those few hours as the cold water was taking over the ship and how passengers were reacting. The stories we’re familiar with are merely just a handful of these individuals’ final moments and acts. With so many people onboard there were countless emotional stories taking place that we’ll never know.

“Iceberg, right ahead!” – What an unusual way for Titanic to go down. It wasn’t from scrapping some corral or an explosion from an engine or anything like that. It was what seemingly would be an easy object to miss hitting. Of all the things to hit, it was a giant iceberg sitting right in front of it. If Titanic was sailing today, I wonder if global warming would have made this chilly impact less likely. For the longest time there was debate whether Titanic went down in one piece or split in two. That debate ended in 1985 when Robert Ballard and a pack of explorers discovered Titanic’s wreck more than seventy years after the ship sank.

Seeing what has become of the once beautiful ship now gives the story an added sadness. When images of a pair of shoes, a doll, a tea cup resting two miles under water one can’t help but get a little lump in their throat and consider what we’re looking at and what happened to the owners of those objects.

The discovery of the wreck and the deterioration of it at the bottom of the ocean shows us the toll the ship went through, but also is tangible evidence that this wasn’t just some made up old story for a book or a film, but was indeed a real disaster.

There is the ongoing argument between excavating items from the ship or just letting it rest in peace. I’m admittedly curious to see what they could find and would certainly be interested in seeing that kind of stuff in a Titanic museum.

It would seem wrong however if those items could just be snatched up by the highest bidder and end up being owned by some private collector. As it was in 1912, the rich seem to be unfairly privileged being able to ‘purchase’ a piece of history.

One thing I read was in 1986 Ballard left a memorial plaque on Titanic commemorating the victims of the ship. As technology has developed and reaching Titanic has gotten more accessible for scavenger hunters and tourists who are willing to drop about $50,000 grand for the ride (it must be the upper class doing that, there’s no room for steerage in those little submersibles). Ballard’s plaque has since disappeared. Ballard claims a salvage crew picked it up and dropped it into an exposed toilet on the wreck. I have no idea if that’s true, but if it is – that’s pretty low!

Anyway, now’s your chance to get a big, healthy dose of Titanic programming to mark its one-hundredth anniversary. I haven’t noticed if anyone is going to bother airing the 1980 film Raise The Titanic. That flick seems a bit outdated now.

I’m betting in another hundred years people will still be captivated by Titanic. Maybe by then the price for taking a trip down to see the ship will have come down a bit. 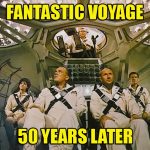 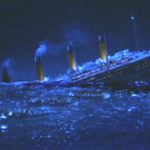