Lucy (Sandra Bullock) is a lonely Chicago transit worker. Sitting in her token both, she daydreams of a trip to Florence and pines for the attractive daily commuter Peter (Peter Gallagher) who has caught her eye.

Working on Christmas Day, Lucy sees Peter get attacked by some muggers and falls onto the train rails. Lucy ends up saving the unconscious Peter from an oncoming El train. Peter is now lying in the hospital in a coma. Through the magic of the screenwriting device of overheard and misinterpreted conversations, Peter’s sweet family end up mistakenly believing Lucy is Peter’s fiancé and Lucy is unable to fix the mixup.

Now Lucy has a problem. She can’t bring herself to tell them the truth. It being the holiday season, they welcome Lucy into the family with open arms and she soon falls in love with them. Then Peter’s brother Jack (Bill Pullman) shows up. Suspicious at first of this mysterious finale, he also becomes enamored by her, while Lucy’s affection also turns from the comatose Peter to Jack.

How will this complicated situation resolve itself? Following a year after her breakthrough in Speed, Bullock would headline this small romantic comedy. While You Were Sleeping became a sleeper hit and helped secure Bullock’s path to stardom. The film showed Bullock could headline her own film, was a bankable star and that audiences were enamored by her and would follow where she went.

While You Were Sleeping has a rather strange premise. It’s a movie that seems like you would see used for a 1940s screwball comedy. I could picture Jean Arthur or Carole Lombard starring in this film had it been made decades earlier. It could have also easily gone into darker territory. Basically the lead heroine lies through the entire film to this nice family. At any point she could come clean and straighten out this confusion, but she rides this lie to the end. What is she waiting for? Just confess!

The female lead could very easily have become an unlikable character. Why doesn’t Lucy just come right out and explain the misunderstanding, admit she’s not his fiancé and not go along with this charade?

Well, for one, then we wouldn’t have a movie. And the movie handles the complicated device fairly well, that you get onboard with Lucy’s deception and aren’t all that offput by it. It also doesn’t hurt that Bullock’s charisma smooths over any misgivings you might be left with from her deception.

This all could have easily become a story about a dangerous, unhinged stalker, who becomes a threat to this family, but somehow the cast, script and director Jon Turteltaub manage to make it all an enjoyable light frolic.

The story follows a predictable roadmap and the characters are not at all groundbreaking (the boss who is Lucy’s confidant, the slobby guy who likes Lucy, the greedy, pompous fiancé, the wholesome sweet family). It has one of those innocent 1940s romantic comedy vibes. Yes it’s formulaic and very predictable, but with Bullock’s charm and likability at the center, everyone else manages to follow suit. They strike the right chord and While You Were Sleeping ends up being a pleasant ride and an enjoyably, innocent romcom.

Lucy and Jack begin to spend more time with each other while Peter’s taking his snooze. They learn each others hopes and ambitions that will be resolved and actually achieved by the end of the film in order to secure that happy ending we’re all waiting for. Lucy gradually realizes that her sleeping Prince Charming might not be the man for her and it is Jack she’s become smitten with. Bullock and Pullman both have a charm and compliment each other nicely, giving a light comedic touch to their scenes. As they look at each other longingly or laugh as they fall in the snow, you know you’re being manipulated, but you don’t really mind because they’re making it so enjoyable to watch.

The film also has a very good supporting cast Jack Warden, Glynis Johns, Peter Boyle, Micole Mercurio, Jason Bernard, Michael Rispoli. I’m again reminded back to that 1940s style of comedy with colorful supporting characters who pop up, deliver the goods with their part and depart leaving the spotlight for the leads to shine. They add that extra dash of good natured humor and eccentricities to fill out the film.

The last third of the film when Peter finally awakens is when ironically things start to get dragged out and become less entertaining. It involves Peter being encouraged by Warden to marry Lucy and his real fiancé showing up, while Lucy and Jack wish to be walking down the aisle with one another. We all know the ending we’re going to get, but the last sprint to get there is just filled with a bit too much silliness gearing up to get there. With the movie taking place from Christmas to New Years, it has that holiday flavor, although I don’t often see it categorized as a ‘Christmas movie’. It could easily fit into a holiday rotation.

It’s funny. With the popularity of all these Hallmark Christmas movies that pour out on an annual basis, While You Were Sleeping is a refreshing reprieve. While the premise could easily be ‘lifted’ for the latest daily Hallmark movie, I highly doubt Hallmark would make it as well as this. It proves with a talented cast and director, they can manage to make such a silly romcom so enjoyable and heartwarming.

There’s nothing groundbreaking and it gives you exactly what you expect. Had it not been for the cast and the light touch the film manages to balance While You Were Sleeping could have been an oddity, but instead it’s an old-school romantic comedy that trumps pretty much most of the ones we get nowadays. 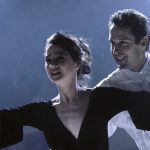