Horror TV hostess Elvira (Cassandra Petersen) is informed that her great aunt has died and left her an inheritance. Driving straight away to the quaint New England town of Falwell she learns she inherited her aunts house, some cookbooks and her pet poodle.

Immediately the uptight townsfolk are shocked and disgusted by Elvira’s sexy demeanor, racy attitude and saucy one-liners. Soon the buxom gothic lady is upsetting the moral fiber of the community and is faced with the locals out on a mission to run her out of their town.

But what’s up with this cookbook and why does Elvira’s uncle want it so badly? And how about the local movie theater owner who is starting to fall for Elvira, but whose girlfriend is getting increasingly jealous? Or how about all the adolescent teens who were starting to like Elvira and are anxious to have some fun in this drabby old town?

Whoa! There’s a lot of drama happening in Falwell! I sure hope it all works out for the best and Elvira comes out on top – or however racy way the Mistress of the Dark likes it! A little random thought before I get into this. While watching Elvira: Mistress of the Dark I was reminded how there was this time period when random characters got to star in their own feature-length vehicles.

It’s like they were a novelty, somehow got extremely popular on stage, in commercials, on television, talk shows and that was enough to give them their own starring vehicle. Pee-Wee Herman, Ernest P. Worrel, even Weird Al Yankovic! Max Headroom managed to parlay his popularity into a weekly television series. I don’t know how likely that would happen today.

It would be like that Flo girl from Progressive Insurance got her own movie where she has to travel cross country to save the company or something.

Anyway, Petersen created her Elvira character as the horror host for the Los Angeles television show Elvira’s Move Macarbre. Gradually her character gained more and more fans, until everyone knew about her. She gained enormous popularity throughout the 1980’s She was appearing on talk shows, doing commercials, having her own video tape series. showing up in comic books. She was no longer a small cult figure, but was now a horror icon. Then in 1988 Elvira reached her peak with the release of her own self-titled movie.

And it’s not too bad. The movie isn’t exactly groundbreaking and it’s awfully silly stuff. It’s a very routine sexy/macabre/goth fish disrupting the uptight waters of a quiet town. There’s not one character that you’ll be left remembering from the movie – other than Elvira. And maybe that’s the way it should be. Even with the always entertaining Edie McClurg as the morality compass in Falwell Chastity Pariah this is solely Elvira’s show.

Petersen tosses off her snappy one-liners and quips throughout the movie while the stuck-in-the-mud townsfolk flash flabbergasted looks. That’s how much of the movie goes. Luckily some of her jokes and deliveries are pretty funny. So that helps to keep things kicking. Petersen co-wrote the movie and she obviously knows the Elvira character better than anyone and what works for her and what doesn’t.

She even does a pretty funny ‘driving away from an explosion’ shot at the beginning of the movie. That was odd to see since I just recently wrote about that movie phenomenon. The story itself with her aunts cookbook that contains witch spells and Elvira’s uncle who is some kind of warlock or something is forgettable stuff. Watching him chase Elvira around during the climax I started to zone out. I’m not sure what was happening. I enjoyed seeing the town believing she’s a witch and wanting to burn her at the stake though.

Fans of Elvira will obviously be more entertained by this than others. Getting a chance to spend a whole movie with Petersen’s character should please them and they should know what to expect. Those Elvira fans is the reason why I would categorize this as a ‘cult movie’.

It’s not the best horror/comedy that came out of the 1980s and it’s not something I would say to anyone, “Oh you have to see Elvira: Mistress of the Dark!” But it was an amusing way to wile away 90-minutes on a lazy afternoon. 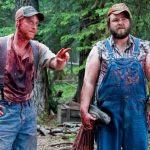 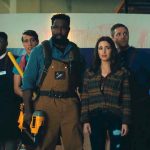