It’s Christmas Eve and all the luxurious floors in the pair of 120-story buildings known as Tower Sky is celebrating.

The residents, invited bigwig guests and the staff in the highrise are in good spirits and are enjoying the holiday atmosphere until an accident occurs. A helicopter crashes into the side of one of the buildings and thanks to a faulty sprinkling system fire engulfs the one skyscraper.

Now in classic disaster movie tradition an eclectic mix of characters both on the ground and high above in the building are battling the flames and trying to survive this fiery catastrophe. The Tower (originally titled Ta-weo) is a a Korean film that is essentially a foreign remake of 1974’s The Towering Inferno. It’s basically the same story – a tall highrise on fire, people trapped in the building, firefighters trying to put out the blaze and a lot of stunt-filled, special-effect sequences commence. Inbetween the pyrotechnics characters endure their own melodramatic story arcs in an attempt for you to care about them.

That last part is the weak portion. There’s thirty minutes of introduction to the roster of characters to establish who they are and the little drama they’re going through before the fire is lit.

Lee Dae-ho is a single father who is manager in Tower Sky and has eyes for Seo Yoon- hee (Ye-jin Son) his fellow employee. He has some trouble asking her out, but luckily his daughter arrives, takes a liking to Seo and helps this budding romance bloom. Captain Kang Young-ki (Kyung-gu Soi) is supposed to be enjoying a quiet evening with his wife, but once he hears there’s people in danger he comes a running.

There’s the rookie firefighter. The elderly couple. The mother of a worried son. A pregnant woman. The young engaged couple. The family who hit the lottery and have just moved into the building right next door to the rich, smug couple. And of course we need the greedy, uncaring owner of the Tower Sky who’s more concerned with the money that’s being lost and not the innocent lives that are burning. The characters are all pretty par for the course in a disaster movie. Although none of them are particularly interesting or unique they’re all completely adequate enough for a film of this type. Could they and their stories have been better? Well, yeah!

But let’s face it you’re not going to be watching this for well drawn out characters and their compelling stories. You’ll be interested in the one story that they’re all facing together – to get out of the burning building alive and to see some impressive dangerous situations they’re tossed into. At least that’s what I was waiting to see. The Tower won’t disappoint you on that request. The movie sure delivers on that!

The stunt and fire sequences are very well done.

Initially, I was expecting a rather average-budgeted movie with a lot of computer-generated effects from this Korean movie. Rather The Tower is a surprisingly rather extravagant production that could compete with Hollywood’s own big-budget features with its action sequences.

The disaster scenarios are varied enough to keep things interesting. It’s not just the flames that are causing panic, but floors are collapsing, characters are hanging onto window-washer scaffoldings, there’s explosions of water tanks and a nice intense scene in a glass bridge. It’s some pretty good stuff.

It’s not the greatest disaster yarn and you’ll probably forget all about the characters as soon as it fades out, but while watching it disaster fans should get a nice satisfying fiery disaster movie fix and even be impressed, saying “That was a lot better than I had expected!” 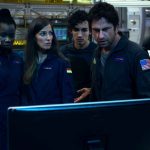