Unfortunately, I missed the whole envelope malfunction. After having endured over three hours of the broadcast I couldn’t stay up any longer, so I missed what was the funniest and most memorable moment of the telecast.

Now what this years Oscars will be forever known for is Warren Beatty’s befuddled face, Faye Dunaway announcing La La Land, and confusion on stage as the world was informed that no it didn’t win the Best Picture Oscar Moonlight did.

That must of taken some of the air out of the celebratory balloon in the room. Every year we’re told the secret votes are counted and handled by this accounting firm of PricewaterhouseCooper. The Oscars always mention it and it must be a nice contract for PricewaterhouseCooper to have. It gives them a lot of exposure for doing such an easy job. It shouldn’t be such a difficult job to count some votes. You send two people to the show to hand the presenters an envelope with the winners on it and boom you can hit the parties.

Although, some how within the past twenty years or so counting ballots has become another one of those things that was once a seemingly simple task, but now we’ve overcomplicated it and can’t do it right anymore.

This mixup happened to the biggest award of the night too. How perfect is that? This certainly wouldn’t have been the big conversation today had they mixed up the winner of the Best Animated Short or the Sound Mixing Category. No, it was Best Picture. Nice job guys! The two reps from the company whose job it was to hand out the envelopes that night will probably have to explain things. I read the one guy had been tweeting all during the night, posting pictures from the ceremony and stuff. Then once the Best Picture thing went down all those tweets were deleted. I don’t know if he was trying to cover his butt to get people to believe he wasn’t distracted at all that night or it was done by his bosses. Whichever I bet Pricewaterhouse will be sending two different reps next year.

I read that Faye Dunaway refused to speak about it. Can you believe that? The two things people want her to speak about – Mommie Dearest and this Oscar mess she won’t talk about! Yeah, she’s a lot of fun.

Fortunately for the Oscars this foulup might have been a bit of a blessing since more people are talking about the show than had everything run smoothly. The Oscar ratings have been tanking for years so this might help with a boost next year with people tuning in out of curiosity. Plus, this screwup has certainly helped set up easy jokes for next years host.

Everyone will remember it, but I doubt the Oscars will embrace this debacle and include it in future highlight reels of the show. They’ll find it much more embarrassing towards the organization than David Niven’s streaker and Sacheen Littlefeather. PricewaterhouseCooper probably wants to forget about it altogether!

Followers of mine know the only reason I had watched was the Oscars In Memoriam segment, and like most everything else in the show it was disappointing. First, I thought it was incredibly brief! It ended and I was struck thinking, ‘that was it?’. I think more time was spent on the bit of actors reading tweets and candy falling from the ceiling. The thing with Kimmel watching We Bought A Zoo felt longer. You can see where the priorities were with the show.

The video montage was accompanied by Sara Bareilles singing Both Sides Now. The song sounded nice, but the montage not so much.

At some point the Oscars began using mainly still pictures in the montage of folks who died in the past year. It not only comes off a bit lazy to me, but also makes the less famous people even more obscure to the home audience.

I had said this to someone after the In Memoriam segment – he and I might know who Ken Adam is and would recognize him from a photo, but the majority of the Oscar audience would have no idea who he is. Yet, if you include a shot of one of the sets from an early James Bond movie or Dr. Stangelove then there’s a connection the audience will make with this man. They might say, ‘oh he created those sets for those movies, I like those movies, that’s a shame he died.’

Instead the In Memoriam segment was more like an uninspired slideshow with names, their jobs and photos of people, who I’m sure most of the audience weren’t familiar with the less famous ones. Had they featured a film alongside them it would have provided an emotional link to this person. They included a few brief video bits and audio from films of the more famed actors, but I thought that came off a bit awkward and jarring.

Most surprising to me was the esteemed Academy decided to feature Zsa Zsa Gabor amongst the forty-five people in the segment. That was a head scratcher to me. They had her billed as an actress. Yeah, I guess once upon a time you could call her that. I mean her performance in Queen of Outer Space technically qualifies her as an actress, but really she was more known for being Zsa Zsa on game shows and stuff. I imagine her inclusion was because she was a familiar face to home viewers and didn’t really have anything to do with her accomplishments towards the Motion Pictures Arts and Sciences.

Yeah, I liked when she showed up on Gilligan’s Island and her performance as Minerva on Batman as much as everyone, but her showing up alongside Debbie Reynolds, George Kenney and Gene Wilder….that wouldn’t have been my call.

A tribute on Hollywood Squares for Zsa Zsa would seem more appropriate.

The same with Nancy Reagan. Yes, I know she was an actress way back when, but I don’t think her acting work is where her legacy lays.

The In Memoriam portion of the Oscars is getting some heat today for the unforgivable mistake of including a photo of producer Jan Chapman in the place for the late costume designer Janet Patterson.

How great is that? Who exactly is running this show? How can they possibly make that blunder? Chapman had been worried beforehand of a possible photo mixup, but the esteemed Academy said they had it all covered. Another great job guys! You know, have an intern double-check some of this stuff before showing a photo of a woman to a billion people telling them she’s dead. I guess they couldn’t bother confirming that small tidbit, they were too focused on making sure the candy falling from the ceiling bit would go off without a hitch.

It’s hysterical that Jimmy Kimmel had said they planned that tour bus gag for weeks, but they never found out for sure that they had the right photo of the lady who was dead and that they would be taking time to honor! How are they going to retract this? It’s not like they can get that billion people together who watched again and tell them, ‘Oh sorry, that lady is still alive folks!’.

So yeah, that was the show. I didn’t think much of it. There was a lot of social media jokes about Twitter, Trump, Meryl Streep, The candy bit and tour bus coming through the joint seemed like they were off shoots of having pizza delivered to the show from that one year. Matt Damon became Kimmel’s Jack Nicholson, you know a famous person the host keeps referencing to. Halle Berry aka Jinx was there. She had some far out hair thing going on. Obviously, everyone is talking about. I guess the consensus is that it looked terrible. But with my ignorance about fashion and hairstyles I actually thought she looked better with that than that twelve-year-old boy short hair she usually has. I prefer her with this mop look than her usual hairdo.

Lastly Naomie Harris was there too. I tried watching the pre-Oscar show – and WOW that’s a bigger horror scene than the actual Oscar telecast! I don’t know how anyone can watch that insipid hollow crap! Well, I tried to and was hoping Harris would reveal some James Bond news – she didn’t. They were too busy asking her about her dress and crap. I don’t know what she was wearing, she looked nice though.

That’s it. I’m going to go rent Queen of Outer Space now since the Oscars took time to honor its leading lady. 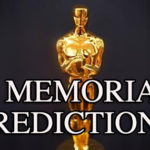 The 2017 Oscars & The In Memoriam Segment 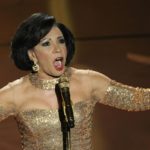 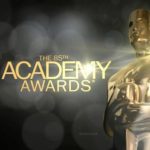 The 2013 Oscars and My Yearly Half-Assed Predictions