In 1977 every week viewers knocked on the door of the apartment of Chrissy, Janet and Jack and made Three’s Company a television hit. The pratfalling, comedic, innuendo-dropping, sexy show made stars John Ritter, Joyce DeWitt and Suzanne Sommers the biggest stars around.

But it wasn’t just zany slapstick hi-jinks and laughing studio audiences that made up the history of the show. There was some major drama going down. Fortunately a television movie co-produced by DeWitt was willing to tell the unauthorized truth of the behind scenes story of Three’s Company.

When I was little I used to love Three’s Company. I’d watch it endlessly on syndication and thought John Ritter was the coolest funniest guy around. To this day if I stumble onto an episode on late night TV I immediately know the episode and how the mistakenly overheard conversation is going to snowball into major confusion for the cast.

That’s sort of what egged me onto to revisit this TV movie. Actually just the other night I was channeling surfing and caught the episode when Jack breaks his leg and Janet wants to be alone in the apartment for a date and Mr. Roper thinks Jack might sue him for slipping on his wet stairs and…..I’m getting off topic aren’t I? Anyway, since I caught that episode I thought I would rewatch this ‘documentary’ and luckily someone was kind enough to post it on Youtube. I think that might be the only way to watch this thing.

New ABC executive Fred Silverman (Brian Dennehy) needs a hit show for the sinking network, he ok’s this idea of adapting the British sitcom Man About The House for American audiences, decisions are made with the casting, a few pilots made, Three’s Company hits the air and is an instant smash and makes struggling actors John Ritter (Bret Anthony), Joyce DeWitt (Melanie Paxson) and Suzanne Somers (Jud Tylor) into stars.

The main crux of the behind scenes saga comes in the form of Somers wanting to be a superstar. Not being happy with just being part of the ensemble of the show Sommers reaches for superstardom with the help of her arrogant business managing husband as she demands an obscene pay increase.

Her and her husband are convinced ABC will bend to their demands. Somers begins to cause major headaches for everyone, especially when she refuses to show up for work. As a result Somers alienates the network, the producers and her co-stars. Inevitably she’s forced into the humiliating position of working out the remainder of her contract alone on an empty soundstage after which point she’s replaced with a new cast member.

Part of the fun of these ‘making of’ movies (aside from the juicy gossip and feuding we see re-enacted) is the actors who have to channel these well known personalities and see how they do. We’ve watched hours upon hours of these original shows and know the actors so well it can always be off putting to see someone else trying to play them. I always have trouble at first getting used to it. Sometimes they work, sometimes they don’t. Here, the cast of actors are alright. Anthony doesn’t look much like Ritter, but he does some of the wacky slapstick that I associate with Ritter pretty well. Tylor is a bit weaker, other than her being blonde there’s not much that screams Somers out to me.

I was actually surprised to see how they didn’t give her one good scene in this docudrama of playing the dumb blonde on set and showing the ‘jiggle’ she provided to Three’s Company, which became the popular criticism of the show.

I suspect there might have been some kind of legal issues that limited reenacting certain things from the ABC show since this television movie was made by NBC. That really would have helped since we never get an idea as to why exactly audiences were tuning into the show. Any stories that we might learn about the show itself gets pushed aside and the Somers drama takes center stage.

What were these three actors doing on that set that made them so popular and was making Three’s Company such a breakaway hit? No idea, we just have to fondly fill in those blanks ourselves. There’s one short brief scene of the cast filming the show and I noticed it was not a genuine Three’s Company scene from an episode they were doing, but more like a like a vague variation to one of them. I guess some things were off limits. Paxson as DeWitt is probably the best out of the cast. Not only does she look similar to DeWitt and is awfully cute but she does a bit of that husky voice that DeWitt has. They should have changed her hairstyle as the show progressed through its seasons like the real DeWitt had done.

Somers comes off pretty bad here. She proclaims she only plays dumb on the show, but with her husband managing her career into the ground and jeopardizing her future it’s hard for me to not think of her as being stupid to let it go so far. Everyone recognizes his incompetence but her!

Somers’ husband Alan Hamel played by Christopher Shyer is fun to watch though. He’s such a confident know-it-all sleazeball that his relaxed attitude is funny as his wife’s career is going down in flames. He never gets shaken by any of it. I mean, is he going to do anything besides straighten his big collar and hair? When the producers finally get tough on Somers and she’s relegated to acting in a separate area with four lines of telephone dialogue I’ll admit I think it was long overdue. I’m betting Somers didn’t like this television movie very much.

DeWitt was the only original cast member involved in this TV movie, so it’s obviously going to lean towards her recollection of events. Not surprisingly her ‘Joyce’ counterpart comes off the best and most sympathetic out of the cast. She’s essentially the victim who’s betrayed first by Somers then later Ritter when he secretly keeps it from her the spinoff show he’s about to embark on after Three’s Company leaves the airwaves. I’m not going to say this all wasn’t accurate or the truth, but I think it would have been a bit more interesting to have some more different perspectives about the events from her co-stars, notably Somers. Was her husband that stupid? Did she really think she was that indispensable to the show and the network? I’m sure Sommers has her own point of view of her time spent on the show.

There’s one interesting exchange when she’s holding up the network for a higher salary. Her husband demands she be paid $150,000 per episode like fellow big TV stars Larry Hagman, Alan Alda and Caroll O’Conner, to which the producer replies, “If we pay Suzanne $150,00 then we’ll have to pay Joyce $150,000 and we’d have to pay John around $200,000….”

That pay scale of Ritter earning more than his female co-stars is glossed over and would have been something of a valid argument on Somer’s side. The movie’s main focus (really only focus) is on Somers contract negotiations and the trouble she caused for the show, so they might as well have approached it from every angle they could have and gotten more mileage out of it. Yet, things are left very much black and white with Somer’s holding the network and producers up for ransom.

Brian Dennehy chews it up as Fred Silverman, ranting and yelling throughout the movie. Daniel Robuck as show producer Ted Bergaman (I can’t help it but no matter what I see him in I always think of him as playing Jay Leno in The Late Night movie – he’s done a lot of these behind the scenes TV movies) and all the network and show people are essentially money-grubbing villains. They are the easy bad guys in all of this. It’s hard to like them when Robuck carelessly casts actors Audra Lindley and the apprehensive Norman Fell aside for their doomed spin-off show The Ropers and could care less whether it’s a hit or not. Oh and Gregg Binkley is way too young to play Don Knotts but he does a decent voice imitation of him.

It’s a very straight forward uncomplicated story. The quality is what you would expect from one of these made-for-tv movies. A lot of it is set in offices, dressing rooms, soundstages. That always seems to be the way most of these ‘behind the scenes TV movies’ are. That probably helps with the limited budgets they have.

If you’re not a Three’s Company fan there’s really no reason to watch this. And even if you are I don’t think you’ll learn anything about the show that you didn’t already know before. 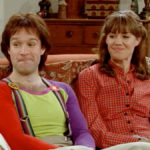 Behind The Camera: The Unauthorized Story of Mork & Mindy (2005) – A Review