To me, Charles Bronson was always one of those actors who appeared in some great films when he was younger. The Magnificent Seven, The Dirty Dozen, Once Upon A Time In The West, all really great films. He had that classic, stoic, dangerous tough guy quality that helped to make him famous.

Then he started to coast on that persona in his later years in some below average action films (what I typically refer to as his mustache years).

In 1974 came his defining role as Paul Kersey in Death Wish. I had never seen the film in its entirety, but was all too familiar with the story (as I’m sure most movie fans are). I finally got around to watching it all the way through and treated myself to a Death Wish double-feature – Death Wish and its first sequel 1982’s Death Wish II.

The original was an entertaining urban revenge thriller that gave Bronson an interesting enough character to play, but still allowed him to do the action thing that he specialized in.

The setup was simple enough – Bronson’s daughter is attacked and his wife murdered. Tired of getting the runaround by the police, seeing innocent citizens get harassed by street punks and watching New York City go down the toilet, Bronson takes it upon himself to start fighting back against the criminal element with a lot of gunfire. Watching Bronson gunning down mugger in the New York subway I can’t help but be reminded of the Bernard Goetz incident. Audiences were really ready to cheer Bronson and Clint Eastwood’s Dirty Harry unleash some long-delayed justice to the criminal in the 1970s.

Bronson plays his usual tough guy screen persona, but here he’s a got a bit more vulnerability and sadness to his character than what his ‘Paul Kersey’ would become in the sequels.

He’s in a panicked state after encountering lowlifes on the streets. He’s shaken up after getting home from filling punks with lead. They are little, small moments, but they help make Bronson’s Kersey much more human and relatable than the unstoppable force he would become down the road. He’s a guy that a really bad thing happened to and who just doesn’t want to be the victim anymore.

The film does stretch things a bit. I mean, everytime Bronson walks out of his apartment some hoods are immediately bothering him. Every-single-time. It’s a good thing the guy doesn’t own a dog he has to walk five times a day. But the vigilante story doesn’t get too overblown. A sock filled with a roll of quarters and a handgun – that’s pretty much all the weapons Bronson arms himself with.

Then I moved onto the first sequel which started a redundant, exploitative, cheap action film series that seemed to use the Death Wish name and Bronson to milk some easy cash. This time out Kersey is living in Los Angeles with his daughter and he has a whole new love interest played by Jill Ireland (Bronson’s real life wife). As is typical in Death Wish films, criminals attack and kill. This time Kersey’s daughter is killed resulting in Bronson arming himself looking for the guilty and ready to unleash their deserved punishment.

It’s all pretty tedious and cheaper this time around. It’s a standard revenge film and the production values and staging of the attacks are really lacking. Bronson roams the streets until he finds the hoods and quickly dispatches them with gunfire. That’s about it. While the initial attack in the first film seemed to hang over the Kersey character like a dark shadow haunting him throughout the story, here it’s used simply as a catalyst for Bronson to shoot 1980s dressed gang members.

There are some secondary things going on. Bronson’s and Ireland’s relationship, the return of Vincent Gardenia from the original film, but they’re not given much time for any kind of development. The film simply consists of stagey shootings by Bronson. The Death Wish series dropped any believability or humanity as the series progressed. Action soon became the only selling point. While it can be fun to see Bronson kicking some punk ass, it would be nice if the films contained a bit more than that. A simple sock filled with quarters was no longer enough and now Bronson was armed to the teeth.

Other than the first film, the rest of the Death Wish series are a pack of subpar action films. they do posses some entertainment cheese, and that’s probably the best way to enjoy the films as they go on. 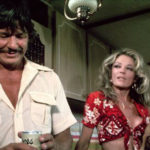 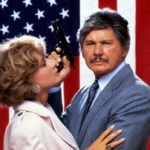