It’s July 18, 1969.. While the world is fixated on the historic moon landing another tragic story has grabbed headlines.

Senator Ted Kennedy (Jason Clarke) has been in a car accident on Chappaquiddick Island in Massachusetts. Driving on a dirt road late at night his car crashes off a pier and submerges underwater. Kennedy manages to escape, but his passenger the young Mary Jo Kopeckne (Mara Kate) isn’t so lucky.

Kennedy doesn’t report the accident until the following morning. Reporters descend on the small community in order to get answers to explain Kennedy’s bizarre behavior, his story as to what happened and how a young woman is now dead.

The Kennedy family faces another tumultuous tragedy – the Senators political career potentially damaged beyond repair. The Kennedy team goes into action facing crisis management in an attempt to clear him in all the legal issues he’s facing and save his image in the press and to voters. Kennedy’s moral obligations to dead Mary Jo now appear to come in a distant second. Chappaquiddick is not a redemptive story. It does not make one feel good. Justice does not seem to be served, the death of Kopeckne is viewed as an inconvenience that must be navigated around. Human morals don’t come into play and the story becomes a demonstration of privilege eclipsing moral and legal responsibilities.

This did not make me like Ted Kennedy. I never was a fan of his before. Having read and watched documentaries about the Chappaquiddick incident prior to this, I felt Kennedy’s sole goal was to save his image and career – and that’s exactly how the film presents him.

As I understand it, the filmmakers didn’t set out to do a hatchet job on Kennedy and pass any judgement on him for his actions. They wanted to present the story as matter-of-factly as they could and let audiences reach a verdict on their own. For me, I didn’t have a moment of sympathy for him throughout the film. I didn’t feel like there were any redemptive moments he had or shown any guilt over the death of Mary Jo. His main concern seemed to be over what would become of his reputation.

His actions – as bizarre as they were following the accident – still don’t make a lick of sense to me. I understand the idea of someone being in shock and doing things that don’t make logical sense at the time, but Kennedy’s behavior in the hours after the accident – not going for help, not reporting it – is too much for me to excuse.

It appeared he was quite clear-headed enough to phone his lawyers to tell them about it, yet reaching out to the police was not done. It’s inexcusable. His concerns was of being a politician rather than a human being.

Clarke is excellent as Kennedy. As with other successful actors playing real life people, Clarke takes the tact of not trying to do a full blown imitation of the man. He does a hint of that ‘Kennedy voice’ and looks enough like him that you forget the real man.

Jim Gaffigan and Ed Helms turn in surprisingly effective small dramatic performances. Helms being a moral center of the story. Mara’s role is brief, but she does fine with her limited appearance. I was completely surprised that it was Bruce Dern who plays the stroke suffering Joseph Kennedy. I would never had recognized him and only learned it was him during the closing credits.

The film does capture the time period extremely well. It’s clear a lot of work went into the set design. It is a compelling story. One that might make you angry, but Kennedy’s dishonesty and cowardice shown in the film make for a fascinating portrait of politics and people at their worst.

I can’t imagine had this film been made when Kennedy was still alive he would have escaped renewed skepticism about the Chappaquiddick incident and his version of what really happened. 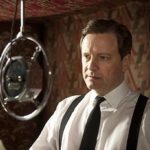