Humphrey Bogart is WWII veteren Major Frank MCCloud. He arrives in Key Largo, Florida to see the widow and father of his friend George who died during the fighthing in Italy. Nora (Lauren Bacall) and James Temple (Lionel Barrymore) are anxious to hear whatever information Frank can tell them about George and welcome him with open arms.

As luck would have it a hurricane is approaching Key Largo and the hotel Nora and James run have a handful of suspicious men who have rented the entire hotel. As they are preparing for the storm they learn that the men are in fact criminals led by the notorious gangster Johnny Rocko (Edward G. Robinson).

They all plan on riding out the storm together, after which these thugs are planning an escape to Cuba. And so begins one of the best hostage movies ever made.

Directed by John Huston, Key Largo is one of those classic films where everything seems to work. The casting, the story, the writing, the direction. It all adds up to simply a great ensemble movie.

Frank McCloud isn’t a typical Bogart tough guy. McCloud is a fallen idealist who has to decide if it’s worth risking his life to stop these guys. As he says in the movie – “Why should I care if there’s one less Johnny Rocko in the world”. He’s scared and has to swallow his nerves to try to figure out a way out of this. For most of the film he has guns pointed at him and he’s much more a passive character than we’re used to seeing Bogart. He’s just a witness letting things play out. But as he gradually stands up against these bad guys, even with small gestures or comments it’s a thrill. It’s sort of Bogart’s Die Hard.

This was the final film Bacall would make with Bogart. Here, she’s not the sultry leading lady she was better known for co-starring alongside Bogart, but she’s a much more modest character. There’s not really a lot of romantic sparks between the characters, which is appropriate. In this story, between these two characters it would have been very awkward. It just wouldn’t seem right if Bogie is trying to get it on with his dead friends widow.

Music fans whose knowledge of the film is limited to the 1982 song ‘Key Largo’ that was inspired by the film, – We had it all/ Just like Bogie and Bacall/ Starring in our own late late show/ Sailing away to Key Largo…. That image doesn’t fit in with the film. So they’ll probably be surprised if they saw the actual film. If they have visions of Bogart and Bacall passionately kissing on the beach and rolling around in the waves they will be disappointed. The film has a much darker and sinister tone. In fact the Key Largo the characters are placed in is more life threatening than romantic.

We’re all gonna die/By a short scary little guy/ How will we get out of here/ And survive Key Largo….

I always thought that song was such a contrast to the actual movie it was kind of funny. But I guess that movie title makes a better love song title than Dark Passage.

Barrymore gives an excellent performance as the invalid hotel owner, who ranges through heartfelt quiet moments to loud cantankerous tirades even with a gun pointed in his face. The supporting bad guys all deliver the goods and make you really start to dislike this motley group of thugs. And Claire Trevor who won the Supporting Actress Oscar for her role as Rocko’s lady who is dying for a drink, is a sympathetic addition to this cast locked up in this darkened hotel. But it’s Robinson who really owns this movie. He plays the mighty Rocko who thinks he’s completely untouchable and truly believes he’s as great as his underlings think he is. He also kind of enjoys playing with peoples heads, having fun at their weaknesses and is a cold bastard who will kill without thinking twice.

Huston pulls together this cast and stages riveting scenes. The atmosphere of the storm outside, the use of wind, sound, lighting, the use of closeups all assist the cast who are all up to the challenge of their parts. Key Largo was adapted from a stage play and watching it you could easily see how it would have worked in a theater.

Everytime I catch Key Largo I end up watching it until the end. I always thought of it as one of Bogart’s best films. It’s intelligent, suspenseful and has a terrific cast. It’s just overall a great movie. 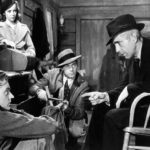 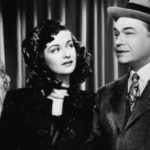