Dan Aykroyd is an imprisoned mental patient who gets the opportunity to impersonate a real psychiatrist who is needed in Beverly Hills. He’s asked to fill in for renowned shrink Charles Grodin on his call in radio show. Miraculously, Aykroyd’s less than professional attitude makes him a hit with listeners. He keeps the charade going with the help of looney Walter Matthau, tries to romance Donna Dixon and hopes to make off with a lot of money before anyone gets wise as to who this conman really is.

The Couch Trip is like a concoction of all these buzzy elements that they try to pull together – A One Flew Over The Cuckoos Nest institution, the popular ritzy, snooty backdrop of Beverly Hills that was being used as the setting for a ton of movies during the 1980’s, the talk radio craze that was becoming a trendy premise.

All this stuff going on and it doesn’t gel as well as they probably hoped or resulted in the laughs a comedy needs. Aykroyd is fine. I don’t know why they made his character a conman pretending to be crazy rather than him actually really being mentally disturbed.

I think that would have been much funnier had he really been this unhinged mentally unstable guy who manages to hoodwink everyone and gets behind a microphone. If they had Matthau’s character be the one pretending to be this respected shrink, that might have been funnier than what Aykroyd manages to do here.

In 1990 Aykroyd did a really bad cop buddy movie with Gene Hackman called Loose Cannons. The hook was that Aykroyd had a split personality disorder. So, that gave him an excuse to do a lot of impressions and act all wacky. I think I would have rather seen Aykroyd play that character dropped into The Couch Trip. The high-concept exaggerated idea of an actual mental patient becoming a hit psychologist radio show host might have ignited more laughs. Just let him give the most outrageous advice you can conceive of, somehow it working and he becomes revered. Have it be more like Being There with the idiot being misinterpreted as a genius. Instead, Aykroyd is a conman who knows full well what he’s doing the entire time.

The whole satire of shallowness and self absorbed attitudes of the wealthy Beverly Hills elite he’s now surrounded by would have been more biting with this really insane person acting the most normal in the middle of them. The movie brushes on that idea, but it doesn’t follow through on it with any real success.

Aykroyd does have a few funny lines. Matthau and Grodin are reliable support. They don’t do anything they haven’t done much better in other films, but I do enjoy watching them. Matthau’s role is almost like an extended cameo. He provides the most laughs. He can play a craggy goofball better than anyone. I used to get a kick out of seeing him holding a bunch of jelly doughnuts with straws stuck in them sucking out the jelly.

Donna Dixon looks attractive, and that’s about it. Her character is extremely one-dimensional, they needn’t have bothered to give her character a name. She plays her part unexcitedly and just kind of fills in the leading woman role. I guess it was nice for Aykroyd’s real last leading man role he did was performing with his real life wife, but her role in this is extremely bland to the point they could have dropped her character completely. Really, out of all the supporting cast with all these name actors, I think the funniest scene comes from distinctive character actor Michael Ensign. You know him, he famously played the hotel manager in Ghostbusters (so this was a bit of reunion between him and Aykroyd), along with appearing in countless movies and tv shows.

He plays the radio show producer who is completely shocked and nervous as to what he’s hearing from his new host. His reactions and dialogue are funny little scene stealing moments. You can see some of what Ensign brings in the trailer below.

I completely forgot this was directed by Michael Ritchie. It’s got to be one of his most forgettable films he directed. It almost feels like they got this basic idea for a story, were able to get this cast together to do it and hoped that they could all somehow make it work without having any strong clear ideas of where the story would go. There’s nothing special about any of it.

A better final hurrah of Aykroyd being the lead in a comedy is Dragnet. The Couch Trip came and went so fast in theaters that probably not many remember it, or have heard of it. It’s not exactly a great highpoint for anyone involved. You can skip it and you won’t be missing much. 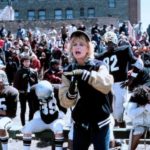 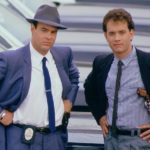