President Ronald Reagan (Richard Crenna) is the target of an assassination attempt by John Hinckley Jr. Reagan is struck by a bullet and his life is at the mercy of frantic surgeons who are desperately trying to save him. The hospital becomes a chaotic scene as the fate of Reagan looks more and more hopeless by the minute.

Meanwhile, at the White House Secretary of State Alexander Haig (Richard Dreyfuss) is trying to present a calm government still at work despite so much drama and confusion unfolding.  The Vice President is out of Washington. The change of DEFCOM levels raises suspicion by the Soviets who appear to be ready to provoke a nuclear strike against the U.S.

Reagan is much closer to death than the relentless media knows. Wife Nancy Reagan (Holland Taylor) is by his bedside and fearful her husband will not survive this shooting. The presidential code card needed to launch a nuclear strike is missing. The presidential line of succession is left in question with Haig declaring, he’s ‘in control’. Plus, the phones in the situation room aren’t even working!

I watched this movie originally when it was shown on television in 2001. Recently I saw a very high-numbered cable network was airing it and thought I would check it out again. While it’s not a great movie I did find it a diverting ninety minutes once again. As the title describes the film recounts the assassination attempt on President Reagan and the events that unfolded as a result. A lot was happening on March 30th, 1981 according to the film. The U.S. was in quite a vulnerable and chaotic state than was being presented to the public.

As I’ve said with previous docudramas I’ve talked about, I go into watching them with very narrow eyes. I don’t hold them to such extreme scrutiny as maybe I should. With Oliver Stone as co-prodcuer on the film I fully expect some liberties to be taken.

I freely allow there will be exaggeration and creative devices used to assist the drama and help the story along. I rarely watch them for factual accuracy. I have looser rules with them compared to say a documentary about the event.

And in that regard The Day Reagan Was Shot is a compelling tale. It manages to wrack up some decent tension between the melee going on in the situation room and Reagan being rushed into surgery with doctors trying to save his life. Both parts of those stories are both interesting to watch. There are some drawbacks though. The movie is very cheap and shoddy looking. It definitely does have that ‘made-for-tv’ look about it with its cheap, uninteresting sets. You could never mistake this for a theatrical release. It’s certainly not a very ‘cinematic’ experience.

There’s also a flatness about how the scenes are presented. There’s no style to it. Scenes take place in the most basic way. It’s like – the camera is here, let the actors act in front of it and now let’s move on. The direction could have helped elevate the emotions of the drama more.

There are only two moments I recall that the visuals had more of a flourish. The first being the actual assassination attempt. It’s filmed handheld, very shaky like the television cameras that captured it at the time. The second was Haig’s famous declaration of ‘being in control’. The camera zooms in on him as he says it.

Just those two moments – and they really don’t showcase very aspiring filmmaking taking place. This in no way resembles JFK, despite Oliver Stone being an executive producer on this film. Which is kind of shame. I’m not saying it should have tried to copy Stone’s style, but writer/director Cyrus Nowrasteh could have upped his game a bit more and tried to give the movie a more unique vision than just point and shoot. The cast is all good. I thought Crenna and Taylor were very good choices for the Reagans. They don’t try to do caricatures of them. Crenna spends most of the film in surgery though.

The real star is Dreyfus who chews up his scenes with delightful anger and arrogance. He’s not working much with subtly here. I’ve read that his portrayal of Haig was a unfair, but Dreyfuss commands the screen everytime he’s on it. He becomes quite entertaining.

There are some odd, unintended humor. At least I think it was unintended. Like seeing Nancy racing down the hospital hallway after Reagan on a gurney yelling she has his jelly beans. A secret service agent fainting in the operating room. A phone repair man popping his head out from under the table during a crisis meeting. At times it starts to come off as a parody skit or something.

I view it as a dramatized fictional version of that day. I’m sure those more familiar with the real life events know where the movie deviates from the truth. It’s worth doing your own research on the history of it and not take the movies presentation as gospel. But on its own its an engaging TV-movie, thanks mainly to the actors.

I couldn’t find a trailer for this, so here’s the scene of President Reagan getting shot 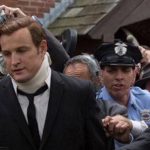