On October 7, 2001, San Francisco Giants Barry Bonds hit his record-setting 73rd home run in a single season. The historic ball flew over the outfield fence and sailed into the bleachers at PacBell Park amongst a pack of fans. There was a mad scramble by the crowd to get the valuable ball. When the dust settled it was Patrick Hayashi who held the ball aloft and was deemed the lucky fan who could stand to make a vast sum of money from selling it.

However, there was a catch – a literal one- Alex Popov claimed he was the actual person who caught the ball in his baseball glove and he lost it in the melee of the excited crowd. As Popov got swallowed up in the surge of the mob, the now loose baseball rolled toward Hayashi, who was an innocent bystander during all this, and simply picked it up.

Popov argued that the number 73 baseball belonged to him and that Hayashi should return it.

What followed was an absurd argument over the true ownership of the ‘million-dollar baseball’. It became a story the press devoted a whole lot of coverage to, it sparked conflicting opinions being heard from all sides, raised the question of the legalities of what constitutes ownership and possession and it would all ultimately be brought into a courtroom to determine who was the true owner of Bonds’ 73rd home run ball. With New York Yankeess Aaron Judge in the news as he’s in a chase to break a home run record and hearing about the value of the baseballs he’s hitting into the stands, it got me to thinking back on the last home run chase and the ludicrous story that followed Bond’s 73rd home run and the crazy story of how two men fought over custody of it.

Up For Grabs tells this goofy story in a very entertaining way, highlighting the childish and ridiculous argument between Popov and Hayashi who each claimed the baseball was theirs. It seemed like a very easy dispute to settle and an agreement could be met, yet it was Popov who appeared to be very eager to make headlines, shout the loudest and welcomed hauling this overblown spectacle in front of a judge.

At times it’s embarrassing, other times it’s quite funny and it’s all such a farcical story you end up feeling like neither of these guys deserved to keep the ball or be rewarded with a big payday selling it.

What’s most interesting about the doc is how writer/director Michael Wranovics, is able to follow the story right from the beginning when that baseball left Bonds’ bat. When Bonds hit number 73 into the stands at the ballpark a camera crew was there and videotaped the barrage of fans hoping to catch a million buck ball. A videotape which would be later used as evidence in the court case. This video begins be pored over like the Zapruder film, and each time reveals a new wrinkle and theory to this whole thing.

The same news crew also captures Popov’s initial declaration that he was the one who caught it and him wanting it back. It begins to feel like you’re following along with this story in real time following along as things get more and more ridiculous.

There are some very amusing interviews from all manner of people involved in the story. Reporters who covered it and witnesses and fans who were at the game that help illustrate just how foolish the whole thing was getting. Umpires testifying in court. Allegations of biting in the crowd. There’s also a couple of curveballs this story takes with some conspiracy theories as well. What was with this ‘Sucker’ baseball witness claimed they saw?

And did Popov really hold a ‘ball touching party’ for the famed baseball??? It’s quite a surreal scene.

This schoolyard spat takes on an almost Rashomon type of approach, with witnesses sharing what they saw and all manner of opinions about who should get this baseball. It doesn’t seem like anyone can settle on a single answer. The most reasonable suggestion of the two just sharing ownership of the ball gets dismissed outright by both parties and they’re ready to fight for their right to keep it all for themselves.

A big aspect to this story is how the monetary value of this inanimate object eclipses any athletic accomplishments that Bonds managed to do or the pure love of the game of baseball. Bonds rewriting the baseball record book with his amazing home run streak is almost an afterthought.

Neither Popov or Hayashi seem to be much interested in anything other than profiting from their luck of being in the right place at the right time. Popov especially, despite everything he tells the camera, cannot hide his true motivation as being selfish and simply wants the profit that can be gained from being the man who caught and sells Bonds’ 73rd home run ball.

What could this baseball sell for? One million, two million, three million dollars?!?! How can one just walk away from that? This story just boils down to greed and money.

In the end, after this whole sordid mess gets resolved and the baseball goes up for auction, I think many will feel the two bickering baseball fans get exactly what they deserve. This tantrum that dragged out for over a year didn’t increase the value to Bonds’ home run ball. It in fact, decreased its value to a measly amount, in no doubt cheapened by the whole feud.

Not to mention all the legal costs for lawyers who got involved, there really wouldn’t be much riches to be made from the sale of Bonds’ home run ball. It’s quite a satisfying conclusion to the story. You couldn’t ask for a better comeuppance.

Up For Grabs is a small film. It’s not fancy and tells its tale in a very straight forward fashion, but it tells it very well. Popov might’ve thought he became a significant part of baseball history by catching number 73 and riches would rain down on him. But this documentary shows he became rather a shameful figure who would end up with a lot of egg on his face.

You’re in luck! Here’s the entire film on YouTube! Enjoy! 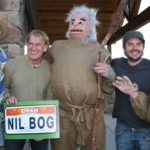