There’s some unbelievable, exciting or simply amazing thing that is occurring onscreen. We as an audience watching this movie are expected to be wowed by it.

To help translate what an incredible and outlandish sight this is, often times a film will place a surrogate of the audience in the scene. Just an ordinary, normal character who is minding their own business and living their life when the film’s story intersects them for just a moment.

It is here where the movie’s stand-in for the audience is given a chance to react to what they’re seeing. And of course, they’re astounded! Their reaction is typically a moment of levity. This character has no idea how things have escalated to this point or how or why this surprising visual is happening. Seeing this outrageous scene, they give a comical and surprised reaction to what they’re seeing – as would anyone would if this was happening in real life.

Often times, this bystander is someone enjoying an alcoholic beverage when they witness said ‘incredible scene’ happen before their eyes. Questioning whether what they’re seeing is indeed real or something their hallucinating from their drink, the action pauses momentarily as we watch them consider perhaps they’ve consumed too much alcohol or that they’ve been imbibing in some bad liquor.

They take a moment to examine their beverage or abruptly throw it away.  It’s a short comical moment and then we return to the action.

And there we have the classic movie trope – The Drunk Guy Double-Take!

This movie cliché has long been a fun comedic button in films for a very long time. The idea of alcohol making someone so inebriated that they believe they might be seeing something preposterous, has been played for an easy laugh since the beginning of film.

It’s quite an easy and quick visual joke to squeeze into a jam-packed scene. A character, typically a man, with a drink in his hand, sees something and wonders if the booze is responsible for him witnessing this incredible sight. It’s a reaction shot practically guaranteed to get a smile from the audience.

This old clichéd gag has endured for a very long time and has cropped in a lot of films!

The random ‘Drunk Guy’ who does the double-take is typically his sole contribution to the film. Just one bewildered look with a drink in hand is all he does. We know nothing of him other than his brief appearance. His sole purpose is to provide that short singular sight gag.

Occasionally he’ll be given a one-liner, like “No more for me.”, “I think I’ve had enough.” or perhaps do a short hiccup, but it’s the visual double-take that’s the important thing. It’s a universal gag that will translate in any language! He does his bit and we never see this poor bewildered soul again.

A key ingredient to make the double-take gag work is to have a stunning, improbable thing for the ‘drunk guy’ to react to. They can’t be reacting towards something innocuous and ordinary. A drunken double-take won’t have the same impact if they were responding to seeing someone taking tamely sipping their Starbucks coffee or looking at their iPhone! They must catch sight of something so strange it ventures into the off the wall images of pink elephants they’ve seen before on their drinking benders.

This is why ‘The Drinking Guy Reaction Shot’ became such a common staple in 1950’s sci-fi and B-Monster movies. That’s really where ‘The Drunk Guy’ started to become a very overused trope and cemented its film cliché status.

This cliché fit right in with all those loopy, low-budget monster extravaganzas. It makes perfect sense! It’s a short, straight forward way to elicit a chuckle by using a random person catching a glimpse of some huge spider, a giant women or some flying UFOs to react to. Those are the perfect fantastic type of things to have some bystander stare at and question their eyesight and sobriety.

In the 1958 B-movie classic The Attack of the 50 Foot Woman, the towering Alison Hayes escapes her captors and goes roaming the countryside in search of her cheating husband. A lone drinking prospector takes a gander towards the horizon and sees the giant woman. And what do you know – he’s drinking from a liquor bottle, does the standard double-take and tosses the bottle away.

There were a lot of inebriated bystanders in those old monster movies. It seemed like every town had some poor drunken sod who gets spooked by whatever monster is on the loose.

The drunken double-take even shows up in Ed Wood’s 1959’s infamous sci-fi movie classic Plan 9 From Outer Space. As flimsy UFO’s on strings are seen flying over a city, a man exits a bar holding a bottle of liquor. He looks up, sees a flying disc and what do you know, looks back at the bottle he’s been drinking from! It’s an intentional funny moment in a film with a lot of unintended laughs.

There could be some variations to the ‘drunk guy’. Sometimes he’s portrayed as a bum or hobo. He’s the local town drunk who everyone knows, but doesn’t believe his story of what incredible thing he’s seen and is trying to convince everyone he’s telling the truth.

Like, in the Attack of Gila Monster from 1958, the drunken man is attempting to convince the sheriff of the giant lizard he saw crossing the road. The sheriff questions the validity and sober state he’s as he examines the bottle of liquor the man has been consuming.

Fellow James Bond fans will recognize this ‘Drunk Guy Reaction Shot’ gag from many Roger Moore films. It became just as common to cut away to a drinking man in a crowd, as it was for 007 to get gadgets from Q!

Famously, there was one particular ‘Drunk Guy’ who appeared in three consecutive James Bond films. The Spy Who Love Me, Moonraker and For Your Eyes Only. This ‘drunk guy’ was played by Victor Tourjansky who would become known as ‘Victor the Drunk’ ‘The Bond Cameo Wino’ ‘The Drinking Tourist’ ‘The Man With Wine’.

Tourjansky was an Italian assistant director to The Spy Who Loved Me director Lewis Gilbert while on location in Italy. After an underwater action scene where the Lotus turned into a submarine, the car would drive out of the ocean onto a beach. Tourjanksky was asked if he would play one of the bewildered beachgoers that sees the car. Having Tourjanksky be in the scene was only meant to be something of an inside joke to the crew. “Hey, there’s Victor on the beach! Now he’s in the movie! Ha!”

Tourjanksky agreed to play the role, but asked if he could use a wine bottle. That was agreed to and thus Tourjansky contributed the memorable moment in the film.

Tourjanksy would return to do a similar gag (pretty much the same one) in 1979’s Moonraker also directed by Gilbert. We see Victor do a double-take of the bottle of wine he was enjoying before Roger Moore drives through the Venice square on his gadget gondola.

Then in 1981’s For Your Eyes Only, directed by John Glen, Victor makes his final appearance, again looking surprised and holding a glass of wine after Roger and some bad guys on motorcycles crash through a ski lodge balcony.

These trio of cameo appearances by Victor the Drunk have become fan favorite gags in the Bond Community and the distinctive role he got to play in three Bond films! It’s worth mentioning that ‘Victor The Drunk’ has appeared in more Bond films than both George Lazenby and Timothy Dalton! Kind of shocking isn’t it?

Despite Victor retiring from doing his drunken cameos, the Bond films continued using ‘The Drunk Guy Double-Take’. In subsequent 007 films, the surprised character holding a drink while witnessing something extraordinary would become a recurring gag.

Ironically, no Double-Taking Drunk Guys ever held a vodka martini. It would always be a more less sophisticated drink they’re holding to make them question whether they were hallucinating or not.

Superhero films are primo genres to get reactions from shocked onlookers. All those superheroic, marvelous things that are happening onscreen, naturally some folks would be stunned to see them. In Superman II (1980) when General Zod first arrives on Earth, he mistakenly lands in a lake. Rather than swim to shore, he uses his superpowers to simply walk on the water.

What are the odds the first person to see Zod is a lone fisherman who is stunned at his amazing feat. Rather than a straight bottle of booze as is the custom for the ‘Drunk Guy’, he questions the coffee from his thermos he’s enjoying.

Perhaps, they didn’t want to do a ‘drunk joke’ in a Superman film and wanted to keep the man’s beverage a little more innocent. OR perhaps it wasn’t just coffee this fisherman was drinking and that thermos had something a bit stronger in it….

‘The Drunk Guy Double-Take’ has become more of a rarity to see today. It’s nowhere near its popular use in earlier eras, when it was common place for folks to be having a drink in the middle of the afternoon. It’s not proper to use bums, hobos or heavy drinkers as a comedy gag. Today a person being inebriated is too sensitive a subject and not felt appropriate to use for a cheap laugh.

‘The Drunk Guy’ has lost some of his power of being a guaranteed knee-slapper. A character being tipsy on booze, who is astounded by what they’re seeing and then asking audiences to laugh at it, isn’t as acceptable today as it once was. It’s not a politically correct subject for humor. There would likely be more of a feeling of compassion towards the poor sod, rather than eliciting a laugh. That’s exactly the opposite reaction ‘The Drunk Guy Double-Take’ is meant to deliver.

We’ll occasionally see the ‘Drunk Guy Double-Take’ cliché pop up and he’ll make an appearance in a movie here and there. In 2005’s Transporter 2 fans the old trope turned up when a Drunk Guy in an alley was astounded by the outrageous driving skills of Jason Statham.

Nowadays, rather than showing a character consuming an alcoholic drink, they’ve been replaced by a safer version of a surprised onlooker –  a simple stunned bystander with wide eyes and mouth agape. They’re not enjoying some lively spirits, but only just watch clear-headed, yet still bewildered. The gag is the same, only no alcohol is potentially responsible for what they’re observing.

The plain old ‘Shocked Bystander’ basically functions the same as ‘The Drunk Guy’. It’s a silent stunned reaction from a bystander during an exciting scene. They might not be holding a drink or have a half empty bottle in hand, but they can still ignite a laugh by their reaction.

There’s really nothing notable about these sober bystanders, other than they’re usually portrayed as just everyday folks going about their day, they happen to see whatever amazing or stunning thing, they stare momentarily and maybe offer up a funny one-liner.

Even the Bond films have ditched their often used ‘Drinking Guy’ joke for more ordinary onlookers to provide a laugh. Like, that couple in Skyfall, who watch as James Bond leaps onto the back of the train in the tube station. They stand, stare at 007 doing some derring do and punctuate the moment with the line, “He’s keen to get home”.

‘The Drunk Guy Double-Take’ can still pull forth a grin. We don’t see the cliché get used as often as it once was, but it remains a reliable comedic button to add to a scene. 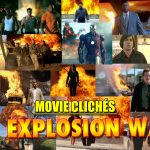 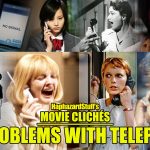 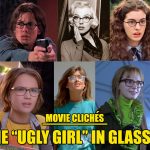