Jim Hutton works at the Bureau of Engraving and Printing in Washington D.C. You know, the place that prints money! It’s a nice gig, until one day he accidentally destroys $50,000! Knowing his boss won’t listen to reason and would love to string Hutton up for any minor infraction, he comes up with a plan that will save his job and avoid prison time.

Hutton decides to break back into the place late at night and print up and replace the missing fifty grand. He’ll need some help to do this however. So an ensemble cast collide in this madcap caper comedy with stars Milton Berle, Dorothy Provine, Walter Brennan, Jack Gilford, Joey Bishop, Victor Buono, Jamie Farr and Bob Denver.

Don’t get too excited.

Despite a fun cast of recognizable comedy and character actors, laughs are very few and too far between to make Who’s Minding the Mint worthwhile. While watching it I started to think it resembled a cheap Disney live-action movie from the 60s/70s. It’s innocuous enough and might have entertained little kids at the time, but there’s little else here. The setup to the robbery drags as Hutton recruits one co-star after another to help him break in, do a job they specialize in and of course mishaps are the results. None are funny.

Gilford is a safe cracker who is nearly deaf. Berle is very greedy. Buono has to build a boat that will fit in the sewer. Brennan has to work the printing press, but is more concerned with his pregnant dog. Denver is an ice cream man and is tasked to occupy a nosey lady who lives near the manhole they have to go through. Provine wants to help Hutton replace the loot, but is unaware these guys are planning on printing a million bucks for themselves.

Bishop – I don’t really know what he’s doing there. He’s supposed to navigate them through the sewers to get under the Mint, but it didn’t seem like he did very much once the plan goes into action. He does bring his Italian cousin Farr along who can’t speak a lick of English. So, I guess that was in contribution to this endeavor.

The night of the caper is unexpectedly moved up a night early. All the crew are out doing something else, but come running to do the job. So they all show up in various silly costumes not having time to change from their lodge meetings, cub scout groups, gym workouts and ballerina lessons. Uh huh. Funny costumes. It’s not the best knee-slapper. They really try to milk as many laughs as they can with Berle dressed up as George Washington. Constant sight gags of him standing in the boat, posing as a statue, it’s never-ending. That seems to be his main role here – to do George Washington jokes.

None of the bits before, during or after the caper are funny. I can recall only one thing that got a chuckle out of me. To get into the pressing room they have to crawl under an alarmed electric eye. When Provine attempts to crawl under it on her back her ample bosom very narrowly gets into the eyes sights. Yep, that was the best laugh for me in this movie. (You can see that joke in the trailer by the way)

There’s something very sluggish about the movie too. The escalating mayhem that you expect to derail this plan, the series of one outlandish problem after another piling on top of another resulting in the belly laughs don’t happen. I mean, of course there are problems for these inept thieves, but they don’t build into laughs or mounting panic. The gags are not even a little bit creative. The only time the pace truly picks up is when they speed up the film for a getaway scene towards the end – and even that drags on way too long!

This one you can skip. Perhaps if you watched this back in ’67 when you were a child it might hold some nostalgic amusement to see again. Oh, sure it’s a fun a cast, but even then you’ll probably think it’s not as funny as you remember it. 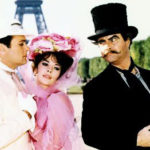