I don’t know why, but I suddenly started to get a really bad feeling about the newest adventure of Bruce Willis’ John McClane – A Good Day To Die Hard.

Admittedly, I didn’t have too high of hopes with this sequel anyway. McClane teaming up with his son, he’s some kind of government agent, they’re in Russia, explosions start to happen. It already started to sound like a typical action flick and that’s not what a Die Hard movie should be. A Die Hard movie should be Epic. Unique. Great!

Of course the quality that the series started out with when it began in 1988 has dropped, but this newest Die Hard is looking like things might have dramatically taken a nosedive. The reason this uneasy feeling blanketed over me about this was because I saw a new clip of the film and it had some of that extraordinarily, silly, hard to swallow, action that the previous film, Live Free or Die Hard finished up on. Last time McClane was hanging off of a Harrier jet and now it looks like he’ll be doing similar superheroic feats with an exploding helicopter, falling through countless stories of floors made of glass in buildings or something

Then I started to put all the negatives in a pile about this flick – writer of the A-Team and Wolverine. director of Max Payne and Flight of the Phoenix. Plus, a February release for a Die Hard movie? My gut is telling me to prepare myself for the worst.

This is kind of strange that in such a short span of time we’ve gotten old school action films from Arnold Schwarzenegger, Sylvester Stallone and now Bruce Willis.

We should start getting the word on A Good Day To Die Hard any day now. Fans will certainly be curious about it and the series has earned a lot of goodwill through the years. I wonder if this time it will completely squander that and leave everyone disappointed.

I’ve already begun mentally preparing myself for this to be the worst Die Hard film in the entire series. I hope this won’t be the case, but the signs don’t look good. At the very least it will have this hot looking motorcycle chick in it. She’s easier on the eyes than Alan Rickman. That’s something I guess…. 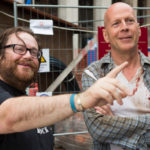 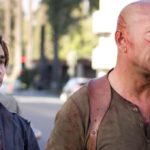