It’s Christmas time and young widow Connie (Janet Leigh) is working as a secret shopper. She plans to buy an expensive toy train at a competing department store. While making the purchase toy salesman Steve (Robert Mitchum) gets clued in on what she’s up to immediately. Feeling that holiday spirit he decides not to report her to his boss and is subsequently fired for his goodwill to the competition.

Through a series of chance encounters Steve and Connie keep getting pulled together and soon take a liking to one another, and Connie’s suitor Carl (Wendell Corey) doesn’t much like it.

Steve and Connie seem like a great match. Even Connie’s son Timmy (Gordon Gebert) takes a liking to Steve, much more than cool attitude towards Carl. When the toy train mysteriously shows up under the tree for Timmy, Connie finds herself backed in a corner. It’s now a battle between logic and her heart. She can either send the train and Steve packing OR have an unexpected happy ending for her and Timmy. Holiday Affair is another one of those movies set around Christmas time that seemed to have gotten lost in the holiday crunch of movies that get pronounced airplay every December. It should get a bit more exposure. It’s a film that you might not love, but you’ll certainly like. It’s not exactly a great classic film, but it is a cute, sweet movie with a strikingly unusual role for Mitchum.

In a rare performance, Mitchum plays a much more lighthearted, comedic character than what audiences were used to seeing him. When I envision Mitchum I see a tough guy in a trench coat with a gun in his hand, not a friendly bloke wearing a loud tie with a toy train under his arm. This is a character I would easily see Jimmy Stewart playing, but Mitchum – it’s a bit of a surprise. It might not be the Mitchum we know, but he’s very good playing a much less hardboiled character.

Aside from seeing Mitchum play against type, Holiday Affair is still an entertaining seasonal romp with dashes of humor, romance and sweetness. Plus, for model train lovers they’ll probably find it especially alluring. There are some humorous awkward scenes between the characters as we learn Steve is not one to hold back his thoughts and feelings much to the chagrin (or perhaps secretly to the delight of Connie).

Connie would rather play things safe and bet on a dependable future with Carl, but Steve won’t hold back and share his opinion as to why he thinks that’s a mistake and he’s the guy for her. Mitchum and Leigh share some fun chemistry in their back and forth exchanges. Leigh looks extraordinarily young in one of her earlier film roles. I always think to myself – “How young did she have to be when she had little Timmy???” It’s also refreshing that Carl is not a typical bad guy. He’s not the evil, rich, manipulative character who’s pressuring this war widow into a marriage. That’s usually what we would see. Connie’s choice between two guys and it’s clear one is good and one is very bad. Carl is not a villain, but we can see he’s just not the guy for Connie.

Gebert who plays young Timmy is a likable, genuine movie kid. I never feel like he’s trying to play all cute and lovable. You know, that thing that a lot of kids in movies do? That artificial sweetness where you notice the kids performance and him being directed through all his scenes and instead of it making you say “Awww” it  just wants to make you roll your eyes. Gerbert comes across as very natural here.

The majority of the movie takes place in Connie’s apartment, the department store and Central Park. And all those scenes are very enjoyable as we learn about the characters, watch them interact and how they react to this unexpected romantic triangle that has taken root. Yep, it’s the characters that really make the movie.

But there are some silly sidesteps the movie takes. The biggest one is a scene at a police station with Police Lieutenant Harry Morgan trying to make sense of a convoluted story between our leads. It’s a very hackneyed movie scene, that tries very hard to be amusing and ends up as one I didn’t much care for, but fortunately it’s relatively brief and doesn’t sink the movie. It’s these group of characters that really make the movie work. All the actors deliver the goods and get you invested in this coincidental meeting of possible lovers, even when the story takes some schmaltzy detours.

Mitchum is a surprise and he probably could have delivered even more enjoyable light roles like this – if audiences had wanted to see him this way. Leigh compliments him quite well and looks incredibly young here. She must of been about twenty-two or three in this.

It’s an entertaining, more obscure movie for those that want to broaden their holiday programming.

Here’s the trailer. I guess they knew Mitchum in this type of role was something new and unique. I bet they weren’t sure how audiences would respond to him in a holiday romantic comedy. From what I’ve read, Holiday Affair wasn’t too big of a success upon its initial release, but it’s just itching to be added on some holiday viewing rotations. 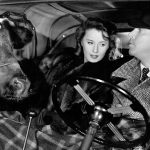 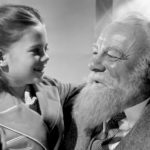