Being one of DC Comics ‘Big Three’ and the most famous superheroine ever, hasn’t ensured Wonder Woman’s live-action exposure. And her absence is becoming increasingly more and more noticeable.

But with recent news that a television series produced by David E. Kelly (Ally McBeal/Boston Legal) was in development to bring the Amazonian princess back to the tube perked up fans ears, they went even higher with the announcement of Adrianne Palicki has been cast as television’s newest Wonder Woman.

Palicki is said to have been the only actress called to read for the role. She’s best known for her role as Tyra on Friday Night Lights. She’salso appeared on Supernatural, South Beach and Lone Star. Looking for any past superhero connections? Oddly enough, she appeared in Smallville and the failed Aquaman pilot from 2007. There’s some interesting DC connections.

A new version of Wonder Woman has been kicking around for years. First, as a big-budget film by producer Joel Silver for the last decade that never picked up steam for whatever reasons.

The most recent news about the Wonder Film was Joss Whedon, who was set to write and direct the film, eventually leaving the project after Warner Brothers apparently didn’t agree with his take on the character. Since then Whedon signed up to direct The Avengers film and Wonder Woman has been left in never-ending ‘development’ limbo.

Now we get wind of a new television series. When I first heard the news it immediately seemed like a compromise. Since the film wasn’t going anywhere, an alternative plan was hatched. The character is too valuable a commodity to not do anything with, so let’s give her a TV show.

Besides some animated adventures, Wonder Woman has been absent in television and film. The last we saw a real Wonder Woman production was in the 1975-79 series famously starring Lynda Carter. Her getting a new series is somewhat a surprise since fans have been following the rumors of a film for years.

A television show does fall into the recent news of Wonder Woman being given an updated costume in the comics. It looks more digestible to see an actress wearing it and much easier to adapt to a live action actress to kick ass in.

Of course the comic character will go back to her original costume at some point. It’s just a publicity device to get people talking about the character. Don’t believe for a second DC would completely throw away the iconic character’s costume no matter what anyone says. And if so, just sign over the rights to me if you guys really don’t plan on using it anymore. Yeah, let’s see who fliches first….

So, now Palicki will be the newest incarnation of Diana Prince. This “reinvention” of the character will be a successful corporate executive in Los Angeles trying to balance being a modern woman with her superheroics. No word yet whether we’ll see her in her classic costume deflecting bullets and wielding her magic lasso.

I cynically forsee a cheesy action television show that strays so far away from the comic character, the show essentially becomes another version of La Femme Nikita/Alias/Bionic Woman series and will lose the uniqueness of the character and her mythology.

But I’ve been proved wrong before. Maybe if the show will be a success. Plus, I will admit it is a relief to hear that someone is actually moving on a project for the character and I will certainly be tuning in to see how it is. 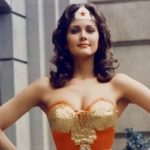