Ridley Scott follows Prometheus to further explain the history of how those dangerous xenomorphs came into existence and have managed to chase helpless humans around in space throughout this Alien franchise.

And I didn’t care at all. In fact, I cared less about this story than I did with Prometheus. So, I guess Convenant manages to make Prometheus better by default.

I never liked this idea of prequels and explanations for the alien. I never wanted it, never cared about getting a history lesson of these creatures or seeing their evolution of becoming these super scary creatures. We understand their life cycle enough – they suck your face, pop out of chests and terrorize and kill incompetent space travelers. What more is there worth knowing?

The fact the movies were called ‘Alien’ was plenty for me. Its title stated flat out that this was some mysterious creature that humans never encountered before and knew nothing about them, only that it was deadly. By the time the characters comprehended the basics – that they didn’t want to get a kiss from them or they’d give you a real bad stomachache it was all too late. But somehow it seemed like a good idea to someone that we needed to be taken back before the events of the original 1979 movie and learn all about them and their evolution. It seems pointless, but ok let’s do that. Let’s explore these creatures.

And what Scott has come up with hasn’t been very interesting for the aliens, the humans or this franchise.

Alien movies have become like the Terminator series. We’re not getting anything new or exciting from them, yet they just continue re-telling the same old basic story, with the same old scenarios. And when they do try something new with them it fails. None of it is done any better or as compelling than what has come before.

Honestly, I think I would just prefer if they just churned out more of those Alien vs Predator movies. At least those are meant to be cheesier B-type of monster mash movies with no more loftier aspirations than an intergalactic grudge match. How they haven’t managed to make those flicks rmindlessly fun is more of a mystery I’d rather solve!

So, this time the spaceship Convenant has a crew of humans looking to colonize a planet in deep space. Something goes awry, they pick up a mysterious distress signal by another human and decide to nix their planned destined planet for this other one. The film doesn’t come up with very strong reasoning as to why this should happen, you just have to accept the captain decides on it and they all go there. Then things continue to just conveniently happen so the requirements of an typical Alien movie gets fulfilled.

Everyone is intrigued by this planet and they set out exploring. It looks like it can support human life. Any other reasonable person might say, ‘Well, just because it looks safe doesn’t mean it necessarily is, maybe we should take some precautions’.

Nah. That kind of thinking doesn’t work in an Alien movie. As the story demands, the colonists venture out into this strange planet and what do you know, they get infected with this weird black stuff – that I guess has evolved from that deadly black goo from Prometheus.

One moment that really annoyed me was while these dopes are exploring this planet one character dramatically says, “Do you hear that? Nothing? No birds, no animals. Nothing”.

Why the hell would anyone expect that there would be birds or animals on an alien planet??? It’s an alien planet, it’s not Earth! Maybe it’s normal for there not to be any animal sounds on it. If anything is out of place  at the moment on this mystery rock it’s these humans walking around on it!

That bit of dialogue really drove me crazy. They used it in the trailers and it’s meant to be this big ominous moment. If you didn’t know you’d be spending time with a ship full of blockheads throughout this story, that line should clue you in. They’re walking around this unexplored planet and this chick is making such a ridiculous observation. She’s acting like she’s taking a weekend hike in the mountains of Nebraska!

I get with Alien movies you have to put folks in danger. So, yeah maybe they’ll make some irrational decisions along the way to help set up the perilous situations. But….oh brother….Convenant doesn’t even try to justify any of the characters actions in ways that we can relate to. There’s of course this ‘Alien Template’ that fans have long been familiar with. Folks in space, unusual discovery, shock, danger, attack, trying to survive, managing to kill the thing. These films just can’t figure out a way to make these alien stories any different!

And the real kicker is that they’ve become so by the numbers and predictable they don’t even bother trying to shake things up at all! The characters have become incredibly dumb, uninteresting, placeholders just to serve that template.

Fans understand some things have to go wrong and safety protocols will be skipped and mistakes will lead the characters into danger. And we’ll go along with that if we see there’s good and believable reasons that lead to the conflict and the scary alien chasing and killing these people. But you have to try to make it somewhat legitimate to escalate the drama.

Can’t they make the characters smart and the drama erupts by unforeseen circumstances rather than relying on their low IQ’s helping to advance the plot? That might be refreshing!

I mean, you can criticize cheesy B-monster/horror movies for poor characters and clumsy execution, but I don’t see them much different than what we get here. The spaceship and planet look neat enough that it could hold your attention momentarily. I wasn’t really impressed by them. The visuals in Prometheus looked better, so there’s not much to crow about them this time around. Oh, they changed things up by having the alien burst out of a guys back. Big deal. For the next movie they should just call it ‘Nitwits in a Floating Can’. Forget setting any of the characters or story up or gradually trying to build to the big alien reveal. Just jump in with the humans getting infected. Do it over the opening titles! Then we can just watch them run away from these aliens, ineffectively try to kill them and making their situation worse until the end of the movie. Let’s not waste time anymore.

At least then it will give the filmmakers more time to think up more different ways of the aliens killing these people, since no one seems to be able to get a handle of how to write some unique characters in these movies to engage us when the aliens are offscreen.

Maybe just make the next one a comedy in space! At least that would be different!

Oh, and if you are hoping for some fun, gory alien attack scenes go watch the first two movies ’cause you won’t find them in here. No, I can’t think of any good ‘alien moments’ from this. Even the ending showdown sucks.

As expected, a bit of alien action happens, colonists are panicked and killed. Android David from Prometheus shows up, who seemingly appears to want to help them, but all he wants is to further the evolution of this alien by using these colonists as its hosts. Everyone is so stupid they fall for every little trick David comes up with. David seals their doom, even though we can all see it coming and really it’s these gullible colonists who are to blame for what happens to them.

I can’t imagine what kind of colony these folks would have made. They seemed to function well when they were in hyper sleep. But given more to do than that I think it’s automatic failure for them outside of their sleeping tubes. We’re meant to feel bad for these humans, but it’s kind of hard seeing as how stupid they act throughout the movie. They also keep doing another Alien trope by putting in the short-haired female heroine, I guess because they know we liked Sigourney Weaver as Ripley, so they figure they’ll just keep that up.

It matters nothing when I didn’t like this woman and couldn’t tell you a thing about her character, other than she had short hair and she ludicrously kills an alien in the end. She’s hardly an effective Ripley stand-in.

The backstory of the xenomorphs gets less intriguing as we learn more and more about them. Really, I don’t understand why anyone thought it was a good idea to create a history for them. And ok, so that’s what the plan is. Fine. BUT this is the best they came up with???

The focus shifts to Fassbender’s David for a lot of the story, who now seems to be the face of this part of the franchise. I’ve heard several people praise his performance, but I don’t see it. I think he’s wasting his time with this series and should try to get out of this to be able to focus on some other projects.

There’s a lot of hefty symbolism and pretentious, boring speeches in an attempt to make all this feel important. It doesn’t work. You’ll leave thinking back to how great the first two Alien movies were and how disinterested these new ones have made this series for you. I imagine even more people will detach themselves from future installments that optimistically stuck around after Prometheus thinking things were going to improve.

This doesn’t look like they’ll be getting any better folks!

I was extremely bored with Convenant. I am tired of these new Alien movies. They haven’t expanded on them in any new intriguing ways that make me anxious to continue with them.

You know, the other night I was flipping through the channels and saw Aliens was on. I stopped on it, started watching it and stuck with it until the end. It’s just as exciting and thrilling as when I first saw it in the summer of ’86. I’m sure I’ll be revisiting it and the original Alien more times in the future.

I can’t say the same about any of these Alien movies that have come after them. Especially these new prequels. Ridley can keep them. 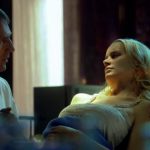