The holiday season has arrived and the Griswold family are getting ready to make merry and enjoy some yuletide fun! Unfortunately, like everything klutzy family man Clark Griswold (Chevy Chase) attempts, the holiday festivities turn into a disaster.

National Lampoon’s Christmas Vacation is the third entry in the beloved ‘Vacation series’ and is the last to use the ‘National Lampoon’ brand name. Since its release in 1989 it has gained something of a ‘classic’ status by fans. I often see it described as a ‘Christmas classic’ and one of the perennial favorite movies to watch during the holidays.

The film has garnered quite a big amount of affection through the years. Today, images from the film have made the leap to holiday decor. You know a movie has really gripped audiences and has become one that’s beloved when you start seeing merchandise based on it decades after its first release.

With all that in mind, I’m going to sound like a real Scrooge here, since I am apparently in the minority regarding Christmas Vacation and don’t hold it in such high regard. Since first seeing it upon its release I didn’t think much of it then and my opinion hasn’t changed through the years. I missed how and when Christmas Vacation had captured so many hearts and became christened ‘a classic’.

At one point I suspected its ‘classic’ status was solely based on nostalgic affection that has helped it endure and not the actual quality of the film itself. The now older audience that first watched it when they were younger has continued to be dazzled by it through the years. They seem to love it, flaws and all. Seeing the film get so much attention and affection every year, my first cynical instinct would be to call Christmas Vacation overrated, but maybe I’m just missing something about it. It does have some laughs, but there is a lot of dead space and very long laugh-less sequences. I never thought it has enough comedy to sustain itself for its full 97 minute runtime.

I always viewed Christmas Vacation as yet another weaker follow-up to the original 1983 National Lampoon’s Vacation. That one I would call a ‘classic’.

I’ll also give it being a better than average ‘Chevy Chase movie’. But that’s really faint praise since most of Chase’s comedies are also pretty awful. If you look at the overall batting average of his films, there are very few homeruns. Sure everyone remembers and loves Caddyshack, but how many Chevy fans are watching Cops and Robbersons or Deal of the Century tonight?

Christmas Vacation uses many of the same beats as the original Vacation. Clark’s driving misadventures. Clark dreamily fantasizing over a beautiful girl. Animals getting killed in comical ways. Clark losing control with a profanity-filled rant.

There’s even a kidnapping ending that is reminiscent of the deleted ending the original Vacation first had that was eventually dropped and reshot.

There’s really no main story thread other than Clark wanting to make the perfect Christmas for wife Ellen (Beverly D’Angelo), daughter Audrey (Juliette Lewis) and son Rusty (Johnny Galecki). The biggest plot in the film would be Clark waiting for his holiday bonus check from his boss-from-hell Brian Doyle-Murray to arrive so he can pay for a family pool. Doyle-Murray was also in the original ’83 Vacation and for my money he was funnier in the smaller role as the clerk at Kamp Komfort. Other than Clark’s holiday bonus being up in the air, the film is a series of holiday misadventuring vignettes. Some deliver really well – which accounts for all those Christmas Vacation holiday decorations we can now buy. Clark’s attempt at decorating the house with 25,000 holiday lights is probably the best and most memorable gag in the film. But for every gag that works, there’s just as many that do not. Ellen has some apprehension about the arrival of both sets of in-laws who promise to cause tension during their holiday stay.

Well, they must of forgot that setup because after John Randolph, Diane Ladd, E.G. Marshall and Doris Roberts ring the bell and step into the Griswold house they aren’t given the opportunity to offer any laughs or are given any comedic scenes illustrating their animosity towards one another. I always thought that was very strange. The four in-laws become background pieces to fill up scenes.

Another odd thing that gets left somewhat hanging is Cousin Eddie’s kids and their hoped for visit from Santa that Clark and Ellen graciously help to make happen. This is where the movie tries to incorporate some emotion and sentimentality with a quiet scene between Clark and Eddie’s cute daughter Ruby Sue.

Since Eddie has been out of work for seven years the kids haven’t had a real Christmas. It all seems to be heading for a payoff, but again it kind of dissipates. The film never makes it to Christmas Day. I guess, the big culmination of this subplot are the kids smiling up at the ‘Christmas Star’ in the end. It’s a very tacked on subplot and isn’t satisfying. It just seems pointless to go down that road with the kids and not deliver something special to it.

At least William Hickey and Mae Questel as a cranky uncle and senile aunt get a decent amount of screen time and get to cause more havoc. Burning the tree, wrapping her cat. It’s not great comedy, but at least there’s some payoffs from their arrival, which are welcome from all the dead space and jokes that don’t go anywhere. The Griswold kids also become a non-presence in the film. It’s become an ongoing joke of the recasting of the Griswold children through the course of the film series. Here, are the weakest pair of kids yet. Lewis and Galecki are completely forgettable and don’t offer anything other than exasperated looks at Dad. They certainly don’t bring any comical moments of their own.

The same in way goes for D’Angelo. She dutifully returns as Clark’s beleaguered yet supportive wife Ellen – and that’s her role. Unlike the original film where she got to show off some jealousy and anger towards her husband and get in on the act a bit more, here she just settles in as more of a one-note movie wife. She almost becomes like an accessory than a character, much like all the supporting actors. Futile comedy is sought from the Griswold yuppie neighbors Julia Louis-Dreyfus and Nicholas Guest who are plagued by Clark’s holiday antics. They become victims in a very lazy series of sight gags that play more as desperate jokes.

Falling down, getting attacked by dogs, having their windows smashed. There’s nothing really creative about the jokes. They all play very forced and are not funny.

It’s the arrival of Quaid’s Cousin Eddie, wife Catherine (Miriam Flynn) and their kids who the film banks the most laughs on. Quaid plays his low-class, hick to to the hilt. He fills up the screen and pushes everyone else to the side.

He’s tasked with wearing classless leisure suits, a winter aviator hat and constantly talks about his ludicrous life. Descriptions about the plate in his head, his amorous dog, talking about his RV. Then there’s the famous image of him in his short bathrobe, clutching a beer can and emptying his RV toilet in the sewer drain yelling “Merry Christmas! Shitter was full!”. And on and on and on. I know Cousin Eddie is quite a popular character with audiences, but I always felt a little of him goes a long way. He’s much better in smaller doses. There’s only so much of the country bumpkin, trailer trash jokes I can take before it starts to get old and I’m looking for some different comedy from the movie. Unfortunately, the film doesn’t have much else. Had I not seen John Hughes’ name listed as the writer for the film I would not have guessed he was involved in the production. The bulk of this holiday comedy comes down to Chase and Quaid. And as I said, some jokes land pretty decently, while I think most do not.

I wouldn’t call it a terrible comedy and it’s certainly not one of Chase’s worst films. It isn’t as great and isn’t as full of laughs as it should have been. It has a few chuckles, juvenile humor and unforgivable long stretches of wait time for a joke to hit its target. I guess it satisfies a lot of folks’ need for some holiday humor every year.

For me, Christmas Vacation is not a film on my annual holiday rotation. I would not classify it as ‘a classic holiday comedy’ and I can easily take a pass on watching it.

At least the movie spawned some Griswold outrageous light display recreations through the years though. Those are fun to see. See, I’m not a complete Scrooge! The films tagline – Yule crack up! 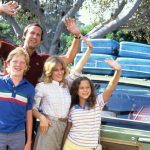