This is a truly terrible movie.

So like every other title that people have a nostalgic affection for and was a popular movie a generation ago, today it needs to get some kind of update. No it’s not a full blown remake this time, it’s a ‘sequel’ that’s meant to ‘reboot’ the Vacation franchise. I guess they’re hoping for future installments of this new Griswold clan going on vacations to various destinations.

If the universe has any mercy it won’t allow that to happen.

It’s the same story as the 1983 original movie. Ed Helms (who can be funny, but I don’t think is made to be a comedy leading man and this flick reinforces that belief) is grown up Rusty Griswold who decides to take wife Christina Applegate and their two sons, whatever their names are, on a road trip to Walley World. Comedy ensues – or at least it’s supposed to.

This was written and directed by John Francis Daley and Jonathan M. Goldstein. I just want to make sure to note those responsible for this and have this movie follow them around for the rest of their careers. Oh yeah, Chris Hemsworth and Leslie Mann can also share in the shame. I stumbled onto this on cable recently. I came in during the middle and was shocked at how bad it was. Not one single funny moment. In fairness and willing to purposely inflict additional torture on myself, I did end up going back to watch the beginning, thinking maybe there was funny stuff I missed. I wanted to give Vacation a chance to win me over with….at least one amusing scene. Nope.

From beginning to end this movie is appalling. Definitely the worst movie I’ve seen in a very long time. If you thought any of the Vacation sequels were lousy, they are nothing compared to the trash this flick is. Save yourself the pain and go watch Vegas Vacation instead! At least that one had a few pleasant jokes!

Let’s get the comparisons out of the way. This does not in any way resemble the original 1983 film, or any of it’s sequels. The only thing here that rings with familiarity is the family’s name, the destination of Walley World and Chevy Chase and Beverly D’Angelo making awkward cameo appearances. That’s it!

If you’re thinking, ‘the original movies were funny so this has to have some chuckles’, you are going to be very, very wrong! Seriously, very wrong!

Let’s do another comparison of the type of humor this movie has. Kind of try to give you an idea of the level of comedy this flick contains, although you probably got clued in on it by the trailer.

In ’83 the Griswolds arrive at a campgrounds. The kids are all excited because there’s a pool there. They run to it all happy, the camera pans up as they get a good look at it. It’s dirty water filled with junk floating around and ducks are swimming in it. In 2015 The Griswold’s jump into what they think is a natural spring, but it’s actually a raw sewerage dump. They spend several minutes rubbing poop on their faces, gargling the water and throwing needles at each other before they realize what they’re swimming in.

The whole stylish ‘less is more’ aspect of humor vanished some time ago in comedy films I guess. This is a perfect movie to demonstrate how far comedies today have fallen. It’s not just hugely unfunny, it’s insipid, lazy, raunchy, gross, disgusting, excessive attempted humor. There’s not so much jokes, but just ‘Ew gross!’ moments. Vacation is an ideal example of why I rarely bother with comedies made these days.

The humor is a string of vile gags, dick jokes and vulgarity. Oh, you might be saying, ‘yeah, but the original movie had some gross humor in it. It was a rated R movie.’ I’ll give you that. But it had nowhere near the avalanche of disgusting comedy this movie contains.

It also had some actual comedy, characters, some sentiment, a satiric take on a family vacation and a story, all things that this movie lacks. Puke, poop and cursing is the only thing on display in this putrid movie. There is absolutely nothing else. It’s as if they said to themselves, “We’re making an R-rated comedy, so we have to earn it tenfold!” So the jokes are disgusting sightgags and toilet humor.

No worries about intelligent setups to them, just have someone puke or have a little kid yell the F word – numerous times over and over again and bam you got a comedy! I can’t imagine how they would ever be to able to edit this flick to make it safe for network television.

The original Griswold’s you kind of liked. These people in this car are annoying and/or forgettable or both! There are no likable characters. Zero. There are no amusing road detours. No funny oddball characters they meet on the way. No unexpected surprising gags. And not one wit of intelligence from anyone onscreen or from those responsible who made this. There’s a lot of screaming and people yelling “Ughh”, but that’s about as sophisticated it gets.

This movie is completely stupid over-the-top cartoonish obnoxious vulgarity. When I saw the trailer that’s what I thought it would be and holy mackerel did it deliver on that!

Some people might laugh at this nonsense, I’m not one of them. I’d gladly take a simple scene of Chase awkwardly spilling the families food at a roadside restaurant than watching Helms riding an ATV into a cow and getting covered in its blood and guts.

Oh it has those required references and homages to the original ’83 movie that are there to desperately satisfy those who want to shout out ‘Hey, I remember that!” and attempt to make a loose connection to the original film, but the movie has nothing worthwhile to offer up on its own.

I highly doubt in thirty years they’ll be having a reunion photoshoot of this cast. Based on how poorly this movie was received it might hopefully be the end of the road for this Vacation series.

One of the absolute worst movies I’ve seen in quite a long time! Utter garbage!!! 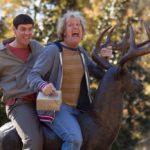