I was flipping through the channels and stumbled onto a showing of Alfred Hitchcock’s 1954 film Dial M For Murder. I had always been a fan of Hitchcock and have seen close to all his films at this point. I hadn’t seen Dial M in a number of years and being really tired I thought I would watch a few minutes and call it a night. I ended up watching the whole thing.

Dial M tells its story in one confined location. It makes sense since it’s based off a successful stage play. Here the majority of the film takes place in a comfortable living room. Hitch seemed to like the idea of limited spaces to tell his stories. It seems these smaller scale settings (Lifeboat, Psycho, Rope, Rear Window) far outnumber his travelogue adventures like North By Northwest.

Tony Wendice played by a brilliant Ray Milland, formulates a plan to have his wife Margo (Grace Kelly) murdered. Apparently he’s not very happy that Margo has been having an affair with American writer Mark Halliday (Robert Cummings). With some help from some black mail and some serious cash he recruits the perfect colleague to do her in and plans the whole thing to the tiniest detail.

But it wouldn’t be a Hitchcock film if things went according to plan. Things soon start to fall apart for Tony and the fun is watching him trying to keep all his plates from falling to the ground and revealing his guilt in his improv cover-up. A long early scene that simply consists of Milland talking and describing his plan is awesome and you immediately start to like his smooth, unwavering confidence. The fact that we know the precise details of what is supposed to happen make the hiccups Tony encounters all the more entertaining to see and how he snakes his way out of them.

Like Norman Bates, Hitchcock makes you like Tony and start rooting for him, even though he wants to knock off the gorgeous Grace. This is really Milland’s movie as much as Hitch’s.

The 3-D fad that is all the craze today is nothing new. This was the one film Hitch shot in 3-D. I did get the opportunity to see it at a screening in 3-D years ago and other than a few moments you’re really not missing anything from the effect. The real star is Milland, who is as charismatic and sinister a screen villain that you could ever hope for.

This was one of Hitch’s films that got the remake treatment in 1998. Retitled A Perfect Murder, it was completely forgettable. The original is just as suspenseful and entertaining as when first was released – with or without the 3D. 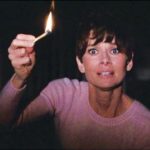 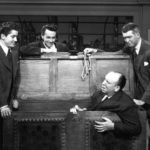