Well, 007 fans….do you have another years’ worth of patience in you? The last three years hasn’t drained it from you completely yet has it?

So, we are a year away from seeing James Bond make his promised returned in Bond 25. We can expect to see him stroll in his gun barrel once again on February, 14th 2020.

And that is now exactly one year away!

Bond 25 won’t just signal the 25th film in the official series, but it will also have the honor of being the second-longest wait between films in the series. It is also going to mark Daniel Craig’s final performance as James Bond – or at least that’s what it’s looking like at the moment.

With this year-long wait upon us, I thought I would take some time to reflect on the current state of the 007 franchise. What is going on with the direction Barbara Broccoli and Michael G. Wilson have been taking the series and how Craig’s 007 run has been doing.

Plus, I mull on a few other things, like – Danny Boyle leaving Bond 25 and the hiring of Cary Fukanga as director. Leá Seydoux as Madelyn Swan being the first Bond Girl to make a return appearance in a second film (not counting Sylvia Trench’s brief return in From Russia With Love). What can an encore appearance by her mean? After the dust settled in Spectre, I speculate as to where exactly Bond’s story can go from there.

Along with some of that, I check out some the rumors that have been circulating about Bond 25, which there have been no shortage of. Who’s being cast, possible stories that we might take place. Plus, I take a look at some of the things we definitely know about Bond 25.

Keep your heads up Bond fans. We have a final year of waiting ahead of us. Next Valentine’s Day James Bond will return. 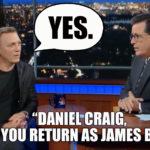