Vietnam Vet/former Green Beret/Congressional Medal of Honor winner John Rambo has walked American highways to visit an old army comrade. After he discovers his friend has died and he’s the last of his unit still living, he wanders into the small town of Hope, Washington.

As soon as he sets foot into the quiet mountain town Sheriff Will Teasle (Brian Dennehy) confronts this drifter. Teasle eventually arrests Rambo. Harassment by the officers causes him to have unsettling flashbacks of his experiences of being tortured as a POW in Vietnam.

Rambo escapes from the law, makes his way into the mountains and things soon escalates into a full scale manhunt. Rambo’s former commanding officer Colonel Trautman (Richard Crenna) warns Teasle that with his special training Rambo is able to survive in any harsh environment and can easily defeat any opponents no matter how many or how well armed they might be. Teasle doesn’t back down and is adamant he’ll capture this fugitive, but soon discovers the lethal adversary he’s up against and the war he has stirred up within Rambo.

The original First Blood and the introduction of Stallone’s Rambo was a much more grounded action film than what the ‘Rambo’ series would eventually morph into. The Rambo we see in First Blood isn’t the superhuman, muscle-bound 80’s icon he would turn into from the first sequel onwards.

Here he’s not facing pure evil adversaries. The body count doesn’t reach staggering levels. He’s not re-fighting a war, only his own personal one. He’s a man with demons, pain, resentment, who is disturbed. He’s a lost soul with special skills he can unleash when pushed.

And Sheriff Teasle lights the fuse.

It’s kind of strange watching First Blood in comparison to the rest of the Rambo film series. It looks quaint alongside the others. It’s become almost the odd one out. It’s a such a smaller scale action movie, but it packs just as much excitement, tension and thrills as any of the other Rambo outings attempt to in showier ways. I personally think it’s the best one. This escalation seems to generally be the standard with action movies. Die Hard, Terminator, Predator, even Stallone’s Rocky series. They start out as gritty, somewhat believable stories and characters, then when the sequels start to roll around a healthy dose of exciting cinematic condiments are added onto them – bigger explosions, more special effects, larger threats, a more expansive canvas to play on.

Somehow Hollywood forgets it can be just as exciting to watch a character we begin to care about in a well crafted scene being trapped in a cave all alone trying to get out, as it is seeing him driving a tank into a helicopter in the middle of a desert surrounded by hundreds of extras. It’s all about the execution. First Blood holds up remarkably well. Rewatching it I’m reminded just how effective an action film it is. It builds gradually and hooks us in quickly. We’re sympathizing with Rambo as we watch him learn of his friend’s death. He’s not looking for trouble, he’s only wanting to get something to eat when he wanders into Hope and encounter Teasle.

Although Sheriff Dennehy might have his reasons as to why he would want to get Rambo to pass through his town as quickly as possible, we’re already on Rambo’s side thinking, ‘just let the guy get something to eat, he’s not bothering anyone’.

After his unfair arrest and we see hims get more and more mistreated, we begin to root for Rambo more and more. When finally he does break free we’re completely on his side. When he’s back in his element and his survival skills kick in there’s great satisfaction seeing him take out the officers one by one. One thing I always liked in First Blood is how important the setting becomes. Rambo is battling the cold, unforgiving mountain conditions as much as the posse that are hunting him. The locations make you feel the dampness and the cold. The film really uses the locations to the max and exploit them for all their worth.

Any other time this setting would be a beautiful picturesque postcard with waterfalls and forests. It looks like a perfect setting for an afternoon hike.

Director Ted Kotcheff and cinematographer Andrew Laszlo present it as a wild, unmerciless setting. It’s not a place you would want to get lost in. Watching Rambo run through it sleeveless, unprotected appears to be enough of an ordeal. Stallone’s Cliffhanger had a similar harsh weather setting they tried to exploit in the story, but I don’t think it compares to how effective First Blood did with it.

In fact, there’s an excellent video revisiting the locations of First Blood decades later. It’s amazing how little has changed since the movie was filmed. It’s testament to the film how distinctive it made use of the real locations (which was filmed in British Columbia, Canada). Compared to the other films in the series, none of the settings John Rambo was placed in has been as memorable as the area of ‘Hope, Washington’.

I can’t think of any other locations that have been used in the series that fans would want to make a pilgrimage to see. Maybe Rambo’s home ranch in the fourth film?

Stallone delivers with one of his best performances. He doesn’t get much dialogue, but we all know how convincing he can be when handed an action role. Here he does quite nicely. He’s not just a macho action hero, but he also gives Rambo shades of loneliness and despair. He’s good.

The character of Rambo in First Blood and the whole film itself is dramatically different than what the sequels would become. Rambo never deliberately kills anyone in the film. There’s as much of a focus on the drama and the plight that vets were treated by their own government and the disdain of when they returned home. There’s more depth happening in this film than the straight popcorn, caricatured action sequels the character would headline in. Dennehy is terrific in this. It’s hard for me to describe his Teasle as a villain. He’s certainly not as over-the-top villainous as latter adversaries we would see Rambo face. He’s a likable enough guy, but he has a streak of prejudice towards Rambo as soon as he sees him. It’s somewhat ironic the actions he takes of trying to initially avoid any conflict with Rambo has the opposite effect.

Dennehy is one of those actors, much like Gene Hackman, who can be charming even when playing a heavy. I always think of Silverado where he’s unmistakably a bad guy, but he’s has such an engaging veneer to him he remains a delight to watch, no matter how devilish he acts.

In First Blood I can’t ever say I hate his Teasle. He’s much different an antagonist than Stephen Birkoff or Charles Napier in Rambo First Blood Part II. I view Teasle as a misguided man who deserves the lesson he’s about to get.

As much fun as the Rambo series can be, something got lost as it evolved into the cartoony super heroics Stallone would perform in the sequels. For me, the simple scene of Dennehy arresting Stallone plays as tense and riveting a scene as Rambo armed with only a bow and arrow facing down an army of enemies.

Crenna provides the necessary gravitas explaining who Rambo is, what he can do and warning Dennehy to just back off or face the consequences. The pair have engaging conversations and are both very good in their scenes together. That’s another thing the sequels lacked – the drama and solid performances continue while Rambo is offscreen.

The action is top notch. It looks convincing, dangerous. The story has similarities to The Most Dangerous Game – a man being hunted by other men. Only this time he turns the tables on his pursuers. It’s too bad Dennehy is too stubborn to take Rambo’s and Trautman’s warnings seriously and didn’t ‘let it go’. As a result Rambo targets the establishment he’s in charge of and that he feels has persecuted him.

There’s also that wonderful score by Jerry Goldsmith that really adds atmosphere to it all – the excitement, the sadness, it’s a terrific score.

Had the Rambo sequels never happened, First Blood would remain a feather in Stallone’s cap. It’s one of his best action films he starred in. As entertainingly silly and bombastic as the sequels can be, First Blood is the peak of Stallone’s Rambo outings. 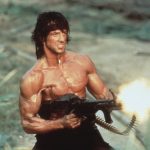 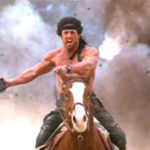 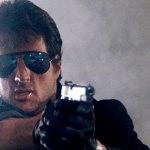