Lounging around one evening, flipping through the channels and landing on Turner Classic Movies (one of my favorite stations). They were just gearing up to air Four For Texas, a 1963 western comedy starring Frank Sinatra and Dean Martin. Having never seen it and being a fan of Old Blue Eyes and Dino I thought I would stay tuned.

I was quickly surprised to discover that not only did this film star Frank and Dean, but it co-starred Anita Ekberg, Ursula Andress, Charles Bronson and had an appearance by the Three Stooges! Oh I had to watch this!

Unfortunately, despite the eclectic cast and the anticipation of an entertaining movie laying ahead for me, it didn’t happen.

The opening scene starts out promisingly enough – Frank and Dean outgun a group of bandits led by Bronson who are attempting to rob a stagecoach. Frank and Dean escape and end up trying to one up each other for the loot. Pretty good beginning. From there the film moves to a small Texas town with Frank being the big operator trying to get the cash back from Dean. It sounds simple enough and a setup for some fun, but instead it moves at a slow pace and isn’t particularly funny or exciting to watch.

Director Robert Aldrich was said to have little control over Frank and Dean, who pretty much did what they wanted. It drove Aldrich crazy and didn’t leave him with much control over the production.

So Frank and Dino would only do single takes, showed up to the set late and generally didn’t take the filming seriously. And their lack of enthusiasm shows. It’s a shame too. Had they put in more effort into the film, perhaps the audience would have had as much fun as they were having. Instead we get left to watch an uninspired project that they coasted through. Ursula Andress looks stunning in this though. When she shows up onscreen she certainly holds my attention. She and Martin have some decent scenes together and they are probably the best in the film. They’re basically flirtatious, lustily gazing scenes of Martin towards Ursula, which is what I was doing.

Sinatra’s scenes with his leading lady Ekberg go nowhere. They only have one or two scenes together and are completely forgettable. It seemed like they were meant to have a bigger part in the film. Maybe Frank just couldn’t be bothered to show up on the days he was scheduled to shoot more scenes with her.

In fact, Frank disappears for an extended part of the film and suddenly shows back up for the climax. I wouldn’t be surprised if he just got bored and didn’t want to come back to the set.

Oh, and the Stooges…..they show up for a few minutes and do a little comedy bit and leave. It’s actually kind of strange watching Moe, Larry and Curly Joe doing they’re act with Dino and Ursula looking on laughing. Dino even gets into the Stooge act at one point….very odd scene.

So other than Ursula looking gorgeous and the first opening scene there’s really not much here worth recommending. It’s certainly not the best of the so-called ‘Rat Pack movies’. It’s pretty disappointing. 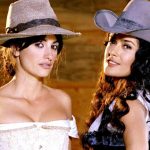