Around this time last year I was watching Syfy’s Piranhaconda. It was the latest entry in the Roger Corman-produced scholocky B-movies that the network was starting to find an oddball success with.

Ironically in the middle of that summer of 2012 while watching it I found myself enjoying Piranhaconda much more than the recent big-budget, much anticipated Prometheus that had opened around the same time. That’s something I would never had expected. I had written up a review/comparison between the two films. It was pretty cool the screenwriter behind Piranhaconda ended up reading and enjoying that review too.

Now it’s summer 2013 and it’s déjà vu all over again. This time SyFy’s Sharknado has lit the internet up with astonished confusion. It’s got people talking about it as much as that Royal baby. Folks just can’t seem to get a handle on a movie with such a ludicrous premise and as result its become a preposterous phenomenon.

It is kind of weird. Not so much that people are talking about this movie, but because in my mind Sharknado isn’t so much different from the rest of the ridiculous crop of cheap B-monster movies that Syfy has been showing for a long time.

I suppose it’s a tad bit sillier, but not by that much. Maybe they just struck a real winning combination fusing sharks and tornadoes that it somehow ignited people’s imaginations. By bringing those two elements together it’s managed to eclipse all the schlock they’ve done in the past and has made it really stand out from the pack.

Based on its success it won’t be too surprising we’ll be seeing more natural disasters and killer animal/monsters colliding. Grizzly-cane. Spider-Blizzard. Snake-A-Lanche. Volcanic Bats. They’re probably already in pre-production.

Ian Ziering is Fin Shepard who owns quite a happening beach bar aptly named Fins. He’s an ex-surfer who enjoys catching the occasional wave with his Aussie pal Baz (Jaason Simmons). Nova (Cassie Scerbo) is a very cute waitress who’s crushing on him and who has some emotional and physical scars she doesn’t like to talk about. Lastly there’s the reliable barfly George (John Heard) who commutes from Beverly Hills to drink it up and enjoy the beach atmosphere.

Their daily lives are interrupted when Hurricane David swoops in and starts flooding the oceanfront. To make matters worse the waves carry countless sharks into the flooded streets. Our four beach heroes try to navigate through the rising waters to get Fin’s ex-wife April (Tara Reid) and his daughter Claudia (Aubrey Peeples) to safety.

But problems keep arising. Water spouts begin sucking up even more sharks into the air and they start to move inland dumping dizzy hungry sharks everywhere! How can anyone possibly survive this cataclysmic event???

There’s no way around it – this is a downright nonsensical movie. You can poke holes in the logic of it if you want, but really it’s not worth the time and you’ll be doing it from the first frame. It’s obvious from the get Sharknado didn’t have any science and nature specialists or shark experts on the set to guarantee authenticity. So you should know just from the title and the premise if this is your thing or not. This is pretty standard stuff from the folks at The Asylum, the studio that specializes in low-budget B-movies and mockbusters. The special effects are cheap, the story is asinine and logic is completely tossed out of a helicopter with sharks flying around it.

A lot of times these movies follow something of a format where the middle portions sag in comparison to the parts that just focus on playing out the high-concept idea. Here we start off with the hurricane hitting the beach and the characters running away from rolling ferris wheels, saving trapped victims of this disaster and of course killing a few sharks.

Once Fin’s wife and daughter come into the picture things start to slow down with pointless character interactions. We really don’t care about any of it. These scenes are meant to delve deeper into the characters and illustrate the mandatory ‘arcs’ the characters will take. Uh huh. Here thankfully the script doesn’t allow for too much of this ‘quiet drama’ and really tries to keep a steady flow of shark turmoil unfolding on the screen until we head to a fun-filled epic finale after which everything ends with things as perfect as perfect can be for everyone who’s left in one piece.

These films aren’t known for their high caliber acting performances and Sharknado doesn’t stray from those expectations. Most of the time the biggest casting coups these Corman and Asylum flicks have are catching actors on their slide down from the peaks of their career or hungry young actors just looking for any kind of exposure.

There’s really not much to say about the performances here. Most of the actors either overact or don’t act at all. That includes the extras by the way. Most of the time it doesn’t seem like they’re running for their lives – it’s more like they’re out for a quick jog.

Tara Reid looks very worn down and has nothing to do other than deliver some cheesy line readings. For most of the movie she just stares at stuff. At one point she chooses her weapon of choice – a hedge trimmer. I was waiting to see how she was going to use this thing on the flying sharks, but unfortunately she never does.

Ziering does better. He keeps a straight intense face and exercises some action muscle while dealing with some outlandish predicaments. I think this was actually the first time I ever watched something he acted in – not counting just voicework. Oh and it was somewhat strange to see John Heard in this.

Sharknado is Cassie Scerbo’s picture as much as it is Ziering’s. Not only is she very easy on the eyes, she gets all the best lines (“They took my grandfather. That’s why I really hate sharks.”). And she does as much bloody shark killing as the guys do. If they don’t get her back for the recently announced sequel I’ll be disappointed.

The special effects of the storming sharks is not surprisingly not the most convincing polished effects you’ll ever see. However, I doubt even the greatest, most sophisticated effects company could possibly sell the idea of a sharknado hitting California and make it any more believable than it is here. Besides the shoddiness of it is one of the films charms.

Along with the wacky shark episodes, what I also found amusing was the unsophisticated way a lot of the scenes are filmed. The characters spend a lot of time in a car. The background is simply blank gray with rain being hosed onto the windshield. As a result it was difficult to tell if they were supposed to be driving or standing still. Same with the helicopter scenes. It’s so obvious the whole thing is stationary and they were either moving the camera to simulate movement or just shaking the whole helicopter with the actors inside up and down.

The outdoor scenes also go from rainy to sunny to cloudy to having gray skies to bright blue skies. In singular scenes the weather consistently changes. There is no continuity at all. Or maybe they decided not to even bother trying to make it all match.

A lot of the time I started to fixate on the backgrounds in the outdoor scenes. While this disaster is raining terror down on the city it looks like a lot of citizens are just driving casually to the supermarket or are just out for a stroll. It’s like these people just happened to be caught by the movie camera and had no idea they were filming a movie on that street corner over there.

But like I said, you have to know what you’re getting into with this, just accept it, get into the ‘so bad it’s good’ spirit of it all and just have fun with it. This is simply a cheesy, dopey, Saturday night B-movie. You’re not meant to take any of it seriously and it’s just here to provide some silly laughs, nothing more. I guess Syfy is trying to ride the wave of excitement it’s generated since they just announced Sharknado will be released in selected theaters for one day only on August 2 for a midnight showing, along with a pushed up international release to take advantage of the buzz

I’ll be curious to hear what kind of reception it gets theatrically. I don’t think it will attain a Rocky Horror Picture Show-type of following. Sharknado seems more like the novelty of the moment. It caught people offguard and they just started having fun with it. It already hit its peak, the excitement is going to die down and it will perhaps pick back up again when Sharknado 2 gets close to airing next year, which I’m sure they’ll promote the hell out of.

I personally wouldn’t be willing to pay a theater ticket price for this. Syfy should really make it a double feature with another one of their selected B-movies. Then it might seem more worth it for fans of this kind of stuff. Make it a whole evening of schlocky shark monster movies where you can watch them with your friends on the big screen and goof on them. Sharknado does not warrant paying a ten dollar ticket price for the privilege to see it. For me, this is fine right where it is – on cable television. I keep thinking to myself what must all these big Hollywood studios be thinking of all this. We all know this summer has seen a decent number of big-budget, high profile films with big stars bomb terribly. Hundreds of millions of dollars going into making these huge tentpole movies and audiences just passing them by.

And here is a made-for-cable movie made for one-two million bucks and it’s managed to generate all this attention, interest and enthusiasm from audiences. Now it’s actually going to make it’s way to theaters. For the amount of money they poured into this movie it’s already paid off pretty well for everyone involved.

When we look back at the summer of 2013 we’ll remember all the big-budget disappointments and then on the opposite side – Sharknado. This goofy cheaply made movie that came along and has found more success than anyone would have thought and put the big summer movies to shame. Go figure. 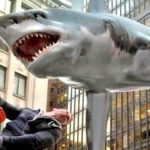 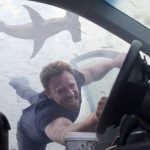 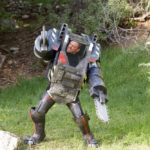