It’s quite a fractured fairy-tale when the entire royal family is killed in a freak accident. Desperate to find a heir to the throne of England Peter O’Toole finds the next King on a very shaky branch on the Royal family tree. John Goodman as lounge singing loser Ralph Jones becomes heir apparent and now will take charge of the country.

It’s the classic ‘Slob Meets The Snobs’ story, as Ralph tries to learn the ropes of being a king, is forced to contend with how to behave like a gentleman and brings his own unique style to the throne of England.

It might’ve sounded like a fun goofy story ripe with comedic possibilities, but King Ralph fails to do anything much with its premise. The most that gets squeezed from it are some silly sight gags, jokes that fall flat and a very predictable story with no surprises.

The film trailer is the perfect cliffs note version of the movie. If you’ve seen that, then there’s really no reason to watch the movie. At times it feels like they came up with this silly premise, convinced Goodman to play the part, but didn’t really have anywhere thought up to go with it. The movie becomes a series of scenes of Goodman dropped into these huge extravagant sets and ready to play off O’Toole, but the jokes just never come. Both actors are very likable and could easily play more than the situations that are given to them.

They try to wring some romance with Goodman romancing commoner Camille Coduri. Then over here we have antagonist John Hurt threatening to push Ralph off his throne. Both of those stories start to fall into the background and don’t bring much of anything to the table. What we’re left is Goodman redecorating his Royal bedroom with pinball machines.

It’s unfortunate too. With the cast they managed to get, King Ralph could have been something more special, but it’s a very forgettable comedy that wastes their talents and the story.

In a way, I always felt King Ralph as a dumb predecessor of sorts to Ivan Reitman’s Dave the would come out two years later – and was much, much better! It took a similar premise (that one being an average guy becoming the U.S. President) and everything in it clicked. The comedy, the characters, the romance, the execution, it was much smarter and it turned into a wonderful comedy.

King Ralph not so much. There’s not much to recommend about it. 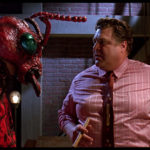 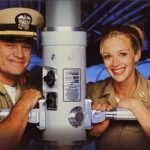