The 1980’s recession has hit Jack Butler (Michael Keaton) in a big way. He loses his automobile engineering job and now has to find another to keep the family income coming in. To his surprise, wife Caroline (Teri Garr) lands a job at an advertising agency and the family roles get reversed.

Keaton finds himself overseeing the domestic duties and caring for their three children, while Caroline is doing battle in the dog eat dog business world. The inevitable sitcom antics and domestic gags result from this topsy turvy situation.

Despite being a theatrical film, Mr. Mom is very much a ‘TV-movie’ film. That shouldn’t be too much of surprise since it was first conceived for that presentation before it was ultimately decided to make it a feature film. When you see Aaron Spelling’s name listed as executive producer, it shouldn’t be too surprising that it would look quite comfy playing in the boob tube.

With an innocuous story by John Hughes, there are light, easy jokes that you’d expect to see in a television show focused on the then somewhat novel concept of a stay-at-home Dad. It’s like the bigger budget precursor to the television show Who’s The Boss? Is anyone really surprised there’s a new recent television series remake based on Mr. Mom? The title alone sounds like a weekly television sitcom and the movie is like a television pilot for an ongoing series. There’s really nothing wrong with Mr. Mom, it’s just an innocuous, comfortable comedy. It’s got gimmicky sight gags and does silly spoofs of Jaws, Rocky, Chariots of Fire and daytime soap operas, a form of entertainment which Keaton becomes hooked into watching being locked in that house all day.

It’s all quaint and harmless stuff, that might not be all that hysterical or be an unexpected surprising story, the cast are very likable and manage to wring all the enjoyment out of the premise as they can. It’s the actors who elevated the premise and material into something much more enjoyable than what it basically is, which is what I think the big reason Mr. Mom has become so enduring for so many fans.

So, Keaton is given a list of the household chores and of course he can’t handle them very well. He ends up battling washing machines, vacuum cleaners, dirty diapers and has grocery shopping misadventures. Trying to figure out how to manage a household and take care of the kids is a tall order for poor hapless Dad. He’s exhausted and the only positive that comes from his new role is getting to flirt with buxom neighbor Ann Jillian.

It’s predictable stuff and while the jokes might not be all that dazzling, Keaton puts his all into his part and his charm pulls it through making it much more fun to watch than had another less charismatic actor been cast. It starts to become a kick watching him load the washing machine and navigate the aisles of the grocery store. Of course, Keaton must overcome being a failure in his new role and get over his bruised macho ego being a house husband, no matter what put downs Mull throws at him. He starts to turn things around, via a Rocky montage. Keaton makes Garr proud, he masters the vacuum cleaner, gets the household duties down to military precision and the house becomes spotless.

This is the definition of light comedy. Keaton’s role as ‘Mr. Mom‘ would be used as an example of the dire casting decision many fans felt would happen when he was announced to play Batman six years later.

Garr matches Keaton all the way through the film. She’s appealing and cute. Her venturing into the rough advertising world and pushing away the advances of boss Martin Mull is somewhat stale stuff. Her rise to to the top with a winning advertising campaign for a tuna company (her idea is basically reducing their prices, that seems like a pretty easy solution to improve sales) isn’t mind-blowing or creative. Luckily again, the cast makes it more enjoyable than what they’re handed. Even the kids are likable and provide their own chuckles with their wide eyed stares at how Dad is mishandling things. Of course they know the daytime household ropes much better than him. One amusing moment is Keaton trying to drop them off at school and botching the whole driving route, not understanding why all the other parents are honking their horns at him as his son simply explains to him, “Because you’re doing it wrong.” Simple little sitcom jokes, but I have to say they are amusing the way the whole cast executes them. Even the sappy, forced emotional family message that is not subtle at all, doesn’t illicit groans because Keaton and Garr are so good together.

Had Mr. Mom had a different cast I’m not sure how well it all would’ve clicked with audiences. The supporting cast also help things along, Jeffrey Tambor, Miriam Flynn, Jillian, an appearance by Hughes favorite Edie Mcclure and there’s Christopher Lloyd in a surprisingly very small minor role. He and Keaton got to hang out more in 1989 when they did The Dream Team.

I can’t say it’s a great comedy, it’s simply a lighthearted family friendly romp. It plays like one of those live-action Disney movies from the 1960’s or 70’s. A safe movie we might’ve seen Dean Jones, Bob Crane or Tim Conway star in. It’s enjoyable, and while it might be embraced much stronger by some, but it’s still hard to dislike it.

In fact, I’m not sure I ever heard anyone say they hated Mr. Mom. I’ve heard many say they “love” the movie, so something about it really, really works about it for them and they continue to watch it over and over again. I think Keaton has done much better and funnier comedies (Night Shift is my personal favorite), but there’s nothing wrong with Mr. Mom. 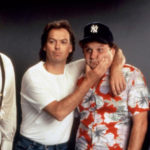 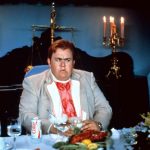