For a four-hour mini-series about Ian Fleming the creator of James Bond I’m finding it hard to find anything worthwhile to write about it.

I guess that already says volumes of how I felt about it.

I had actually watched this entire mini-series quite awhile ago in one evening and had planned to write a review about it immediately afterwards since I do tend to do a lot of Bond stuff and this would fit right in. However, things came up and I didn’t get time and then after awhile I completely forgot I had watched it. Should I even bother going on?

It’s not that the mini-series was awful. There’s some good stuff you’ll find sprinkled throughout its four episodes. It was just overall in the end very forgettable. It is an admittedly exaggerated account of Fleming (Dominic Cooper) during WWII. The film recounts his work with Naval intelligence. Here he finds a place where his imaginative ideas and his audacious personality will become an asset rather than a detriment that plagues him in his civilian life. Walking amongst the smoky halls, interacting with military personnel seeds are gradually being planted in his head for his post-war literary creation of James Bond.

It’s sort of like a much longer drawn-out version of that short film George Lucas in Love.

We first meet Fleming in the shadow of his successful writing brother Peter (Rubert Evans). His mother looks down upon young Ian as he’s become accustomed to a life of sitting back and enjoying the family fortune. Then one day he’s recruited for intelligence work and he finds his calling.

Fleming’s military adventures are the most interesting portion of the series. He butts heads with a by-the-book boss (Samuel West) and befriends a co-worker Lt. Monday (Anna Chancellor).

Some of the schemes he cooks up first sound bizarre, but after convincing them to try them they actually work. He becomes an important part of their war effort. Soon he’s not only drawing up plans and ideas, but traveling to far off lands getting into card games with Nazi’s and forming his own military unit. This is interspersed with Fleming falling for the regal and very married Ann O’Neill (Lara Pulver). Aggressively flirting and rebutting each other back and forth for what seems like an eternity Fleming and O’Neill would ultimately marry, but their courtship (if you want to call it that since she was still married) gets unbelievably melodramatic. At one point a kiss between them takes place during an air raid bombing and has all the subtly of literally a bomb being dropped on the building.

One of the big problems I had with this mini-series was how Fleming is portrayed. I found him to be an arrogant, unlikable asshole. Throughout the episodes I never enjoyed spending time with this guy, never found myself rooting for him or was anxiously awaiting for him and Ann to finally sail off into the sunset together.

It’s very difficult for me to like a man who when we first meet him is enjoying his pampered life and doesn’t appear to be struggling to make more of himself despite the movie and the character supposedly telling us he is. That’s the whole crux of this story and I simply never saw it.

He’s given mommy issues that apparently are bothering him and a desire to make himself a success like his brother, but we never see that driving force behind him. He never appears to be motivated and is forced to struggle. Most of what he accomplishes doesn’t seem like very difficult obstacles he has to overcome. He continues through the story as the same cocky person we first meet and floats along very nonchalantly throughout his war years. The biggest battle that seems to be thrown at him is at one point him trying to stop smoking. And that is forgotten pretty quickly.

Even his recruitment to military intelligence is something that is forced upon him. Agents literally drag him to headquarters and give him a job. Trying to convince his boss to allow him to try some of his ideas isn’t all that hard and he doesn’t have to put up much of a fight to get anyone to take a chance on him. When his boss refuses – Fleming just does them anyway without any repercussions.

The outcome of a lot of these secretive operations Fleming supposedly had a hand in cooking up are interesting. Operation Mincemeat was a true disinformation plan, however the film never provides the importance and impact it had because of its success.

The romance between him and Ann is also something I couldn’t get invested in. She is clearly a married woman and from all appearances is enjoying the lush lifestyle her husband gives her. He doesn’t appear to abuse her or that she’s incredibly unhappy with him.

I suppose the downside of her marriage is Ann doesn’t enjoy sadistic sex with her husband that Fleming is more than willing to oblige. I don’t really have much sympathy for her. The fact her and Fleming finally get together only when her husband is killed during the war made me dislike the pair even more and just made me feel bad for her now poor dead husband. Plus, all the while Fleming is doing this back and forth with Ann through the war years he’s romancing the sweet and innocent Murial (Annabelle Wallis) who’s obviously in love with him. Seeing what the poor woman goes through, the lack of loyalty she is given by him and the disposable way he treats her helped make me not like Fleming even further! I couldn’t help it. There really wasn’t anything I liked about this character.

For a man who would become known for his typed words, throughout this story I never got the impression of any love of writing from him. There’s a few prophetic shots of a typewriter, but that’s about it. The closest connection between Fleming and literature is him getting caught buying Mein Kampf which he claims he wanted for his first edition collection. I’m not even sure if he was a first edition collector of books or if that was fictionalized.

There are few standouts from the cast. I particularly liked Chancellor and Wallis. Pulver is pretty to look at, but Ann comes off as a pretty hollow character.

I don’t think casting Cooper as Fleming was the smartest decision. He looks nothing like the real man and even setting that aside his contemporary good looks I think actually hurts this portrayal of Fleming. This Fleming falls back on his handsomeness rather than any kind of classy sophistication that the real Fleming was known to have. Oh he has family wealth, good looks and can party his life away. Oh what a nice fella – I hope he gets what he wants!

I am not sure how much of the movie is accurate or embellished, but whatever the percentage of the truth vs. fiction that lies here the filmmakers would have done a service to their audience had they made this Fleming someone they could get behind and hope for success. As I have heard Fleming had always been a bit of a snob. He wasn’t necessarily the nicest person who graced the planet. Had the movie embraced that grey persona a bit more it might have made him him a more captivating character to enjoy watching and much more human. Here he comes off as a flat spoiled uncaring character who doesn’t feel any remorse or guilt from his actions or how he treats the people around him.

It has a few details foreshadowing the Bond character – some sets, a piece of dialogue, a few bars of music thrown in here and there, but as it stands I found Fleming: The Man Who Would Be Bond to be a longwinded washout. It’s a dull exercise where artistic liberties obviously were taken, but they weren’t crafted around to create compelling characters or a story. This is a mini-series I won’t be watching again.

There have been several bio pics of the life Fleming that recount his early military years. Recently I was listening to an interview on James Bond Radio with Robert Sellers the author of ‘The Battle For Bond’. The book covers the fascinating story of the mess that became the ownership of the Thunderball rights between Fleming and Kevin McClory. At one point during the interview Sellers mentioned he had been approached a few times to turn it into a movie. If they were ever to do another movie about Fleming, I think his life leading up to Bond has been covered enough. I would be much more interested in seeing the behind-the-scenes Thunderball story be told.

Here we would have a different examination of the man. A story that would feature an older Fleming facing embarrassment, accusations of plagiarism, fighting to hold onto his literary creation which at that point in time had become a phenomenon and all the while being in extremely ill health.

You’d have more colorful characters, a topic that not many Bond fans are aware of and there would be no need for exaggeration or taking so many artistic liberties to make it a compelling part of Fleming’s final years of his life.

I would definitely tune in to watch that. 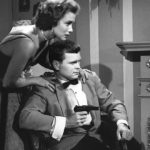